After the New Hampshire vote, the focus of the Democratic race has largely become South Carolina. Senator Bernie Sanders and former Secretary of State Hillary Clinton are making concerted efforts to win the state’s African-American vote. The Congressional Black Caucus PAC is expected to endorse Clinton today. Meanwhile, on Wednesday Sanders met with the Rev. Al Sharpton in Harlem and received an unexpected boost when acclaimed writer Ta-Nehisi Coates announced on Democracy Now! that he would vote for the Vermont senator. We talk to Rep. Barbara Lee (D-CA) about why she has not yet endorsed either candidate. She also points out today’s Clinton endorsement is coming from the Congressional Black Caucus political action committee, not the Congressional Black Caucus.

AMY GOODMAN: We also want to talk about the Democratic presidential race, ahead of the votes in South Carolina and Nevada. On the morning after his victory in New Hampshire, Bernie Sanders traveled to Harlem to meet with Reverend Al Sharpton in New York. Sharpton spoke to reporters after the meeting.

REV. AL SHARPTON: I think it is very important that he sent the signal that on the morning after a historic victory—it’s the widest margin we’ve seen in the history of New Hampshire—he would come to Harlem and have breakfast with me. I think that is why you see Ben Jealous, who is the former head of the NAACP, has already endorsed him. Senator Perkins is here, who is the—we’re in his district. And I think it is important that these issues be raised. I asked him very bluntly about Flint. I’ve asked him very bluntly about affirmative action. I’ve asked him very bluntly about the issues of police brutality and police misconduct, things that I want to hear. He’s agreed also to meet with the heads of national civil rights organizations. All of us are meeting with Mrs. Clinton. I have not made an endorsement and will not ’til after that meeting. Probably after that meeting, I will.

AMY GOODMAN: The acclaimed writer Ta-Nehisi Coates made headlines yesterday on Democracy Now! when he announced that he will be voting for Bernie Sanders.

TA-NEHISI COATES: One can say Senator Sanders should have more explicit antiracist policy within his racial justice platform, not just more general stuff, and still cast a vote for Senator Sanders and still feel that Senator Sanders is the best option that we have in the race. But just because that’s who you’re going to vote for doesn’t mean you then have to agree with everything they say.

AMY GOODMAN: Will you be voting for Senator Sanders?

I have not endorsed in the campaign. I think what is important is that the issues be addressed, as Reverend Al said. I think it’s important that both candidates answer these questions in a forthright manner. And I believe that right now, for many of us, the importance of getting people to vote, the importance of getting people to the polls in November, to make sure that we do not have a Republican in the White House, that is high priority for me—voter registration, get out to vote—and really making sure that our young people, especially, are energized, mobilized and get to the polls in November. We cannot have a Republican president in the White House. I think we see now what the Republicans stand for, who they are, all of the candidates, the values. And so, it’s absolutely essential that we get the vote out in November to win.

AMY GOODMAN: Who is the PAC? Who decided to endorse Hillary Clinton?

REP. BARBARA LEE: Well, I am not a member of the CBC political action committee. And I think it’s important to discuss that with the PAC members. Once again, there’s a clear firewall. There’s a clear distinction.

AMY GOODMAN: Certainly, your endorsement, whoever you endorse, would make a huge difference in South Carolina. I mean, the significance of the vote, not only of African Americans, but of African-American women, is the key deciding factor in South Carolina. Are you leaning in one direction or another?

REP. BARBARA LEE: I don’t think my support really is that important at this point with regard to candidates. We have some phenomenal member of the—women members of the Congressional Black Caucus. We have a great leader, Mr. Clyburn, who represents many constituents, who really represents South Carolina, when you look at his constituency. They are very clear on their political viewpoints and political positions. And so I don’t think it’s about one person. People can decide, members of Congress can decide who they think the best candidate is at this point. But it’s really going to be the people of South Africa [sic]. It’s going to be the get-out-to-vote effort. It’s going to be which candidate—

AMY GOODMAN: Not to belabor this point, but you did make a decision in December of 2007, even before the Iowa caucus, to endorse Barack Obama over Hillary Clinton. Is there a reason that you’re holding out now?

REP. BARBARA LEE: I endorsed President Obama early, because at that point I believed—and I stand by that endorsement—that he was the right person at the right time to really become the president of the United States. I believe that his record is very clear, that that was the correct endorsement, and I’m very proud of the work that he has done. We decide how we’re going to endorse and when we’re going to endorse based on what decisions we think are necessary to get us to that point and when we are needed in campaigns and when we see—at least myself, personally, when I see my support really will help turnout and help us win the White House. That is what my criteria is. And I think that when that day comes, I will endorse, but it won’t be until I see that I can really help, in terms of making sure we do not have a Republican in the White House.

NERMEEN SHAIKH: Representative Lee, could you talk a little bit about what issues you would like to see discussed on the campaign trail and what issues would be a litmus test for you in making your decision?

Secondly, we’ve got to address income inequality, but cannot forget that racial inequality and income inequality go together. There is a clear nexus. And so we have to really ask the candidates how they see these issues being addressed in terms of job creation, in terms of the elimination of poverty, a national strategy to reduce poverty—I have legislation to do that—and really lifting people out of poverty into the middle class. That’s extremely important in terms of opportunity and creating jobs.

Education, workforce training. We have a world now in which technology is driving every decision and every aspect of our lives. I co-chair the CBC’s TECH 2020 initiative with Chairman Butterfield. We’re looking at how we ensure that there’s inclusion in the tech sectors, in terms of the workforce, in terms of entrepreneurial opportunities, business opportunities. And so STEM education and helping young children of color, African Americans and Latino children, Asian Pacific American children, get the best possible education they can, so that they’ll be prepared for this new world of technology, that’s extremely important.

Housing, affordable housing. I haven’t heard much during the campaign about how we address gentrification and affordability in terms of the housing crisis that’s taking place all over the country. And we need to step up and really look at what some of the economic and racial implications are of gentrification, and how we can ensure that everyone, regardless of their income level, can stay where they want to stay, whether it’s in urban areas or in rural areas.

And finally, let me just say, I want to hear more about this defense budget. It’s just obscene. When you’re talking about a slush fund called the overseas contingency account, that funds these wars off budget, that needs to be dismantled, if you ask me. And we need to have a defense budget that’s rational. It’s over $600 billion now. You know, it’s based on, I think, a lot of fear, as it relates to Putin. And I think we have to really take a pause and look at what is taking place in the world, develop a defense budget that’s rational, ensures our national security, but not play into the defense contractors and the research and the R&D budgets that are really there for contractors who are developing systems for a Cold War era that doesn’t exist. And so we need a defense budget that does not include the waste, fraud and abuse that we’ve seen in the past, and methods to audit the defense budget. And I have not heard candidates say that, talk about that. I have legislation—it’s been bipartisan for many years now—just to have an audit of the defense, of the Pentagon. We still don’t know how this money is being spent. There’s a lot of waste, fraud and abuse. And I think much of the press is beginning to uncover some of that. So, I want to hear that being discussed in the campaigns also.

And voter participation. We have to have, you know, candidates talk about the Voting Rights Act and how we’re going to make sure that everyone has the right to vote and is not disenfranchised as a result of the court decisions. We have legislation—and I hope the candidates support that—that would really revisit the Voting Rights Act and put it back to where it should be, where it affords everyone the opportunity to vote, regardless of where they live and who they are.

REP. BARBARA LEE: We don’t know right now how much it’s cost. And that’s because we have accounts that are not really readily transparent. But I can tell you we’re talking billions of dollars, which could be invested in creating jobs here at home and creating educational opportunities for our young people. But also, understand that I’m not talking about not addressing ISIS and not having a defense budget that’s going to help us address all of the threats in the world, which we must do. I’m talking about a defense budget that is consistent with what our national security threats are and consistent with our national security needs, but not over the top, and making sure that we get rid of the waste, fraud and abuse in our defense budget. And so, we’re talking about billions of dollars. We need to audit the Pentagon, and we need to really have a defense budget that is rational.

This is Democracy Now! When we come back, how is it that, well, in New Hampshire Bernie Sanders could trounce Hillary Clinton—what was the percentage?—60 to 38 percent, but they come away with the same number of delegates? Could Hillary Clinton or Bernie Sanders win the popular vote in the primaries and actually lose, ultimately, because of delegates? We’ll find out what this is all about. Stay with us.

Could Unelected Superdelegates Give Clinton the Nomination Even If Sanders Wins the Primaries?

NEXTCould Unelected Superdelegates Give Clinton the Nomination Even If Sanders Wins the Primaries? 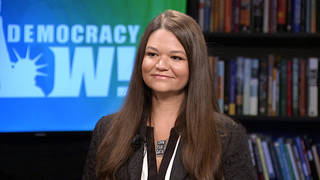