The Iowa caucuses saw an upset victory for Republican Senator Ted Cruz over front-runner Donald Trump and a virtual tie between Hillary Clinton and rival Bernie Sanders. The latest returns show Clinton leading Sanders by less than half a percentage point, a result that would split Iowa’s delegate votes for the Democratic nomination. Some Democratic caucus sites decided their winner with a coin toss. In all six situations, Clinton won. Florida Senator Marco Rubio came in just behind Trump. On the Republican side, Cruz upset Donald Trump with the help of a strong evangelical turnout. We air highlights from the candidates’ Iowa speeches.

AMY GOODMAN: The Iowa caucuses saw an upset victory for Republican Senator Ted Cruz over front-runner Donald Trump, while a virtual tie between Hillary Clinton and rival Bernie Sanders. The latest returns show Clinton leading Sanders by less than half a percentage point, a result that would split Iowa’s delegate votes for the Democratic nomination. Sanders was able to catch up with Clinton in Iowa despite polls showing him at least 40 points behind. Four in 10 caucusgoers voted for the first time, a segment that overwhelmingly favored Sanders. More than one in four Democratic voters listed income inequality as the election’s top issue. Some Democratic caucus sites decided their winner with a coin toss. In all six situations, Clinton won.

While Democrats waited anxiously for the results late into the night, the Republican contest was decided earlier. Texas Senator Ted Cruz upset national front-runner Donald Trump despite Trump’s dominance in the polls for months. Florida Senator Marco Rubio came in just behind Trump. Cruz won in a race that saw a record Republican turnout for Iowa and a strong showing of evangelical voters. Cruz also took Iowa despite opposing ethanol subsidies favorable to local corn growers, a stance that led Iowa Republican Governor Terry Branstad to openly oppose him.

On the Democratic side, [former] Maryland Governor Martin O’Malley announced he will suspend his campaign after attracting just 0.6 percent of the Iowa vote. O’Malley has floated a presidential run since 2013 but failed to gain traction with Democratic voters. For Republicans, former Arkansas Governor Mike Huckabee also announced he’s suspending his campaign.

We begin today’s show with highlights from Iowa. Vermont Senator Bernie Sanders finished the night in a virtual tie with Hillary Clinton, but sounded like a winner in his speech to supporters last night.

And the reason that we have done so well here in Iowa, the reason I believe we’re going to do so well in New Hampshire and in the other states that follow, the reason is the American people are saying no to a rigged economy. They no longer want to see an economy in which the average American works longer hours for low wages, while almost all new income and wealth is going to the top 1 percent.

What the American people understand is this country was based and is based on fairness. On fairness. It is not fair when the top one-tenth of 1 percent today owns almost as much wealth as the bottom 90 percent. It is not fair when the 20 wealthiest people in this country own more wealth than the bottom half of America. So are you guys ready for a radical idea? Well, so is America. And that radical idea is: We are going to create an economy that works for working families, not just the billionaire class.

AMY GOODMAN: With a margin too close to call in the Democratic Iowa caucus, Hillary Clinton stopped short of claiming victory in her speech Monday night, though her campaign has issued a statement declaring she has won.

HILLARY CLINTON: To the families and friends across this state, I am deeply grateful.

HILLARY CLINTON: Well, I—I love all of you. But here’s what I want you to know. It is rare—it is rare that we have the opportunity we do now to have a real contest of ideas, to really think hard about what the Democratic Party stands for and what we want the future of our country to look like if we do our part to build it.

I am a progressive who get things done for people. I am honored to stand in the long line of American reformers who make up our minds that the status quo is not good enough, that standing still is not an option, and that brings people together to find ways forward that will improve the lives of Americans.

I look back over the years of my involvement, from that very first job I had at the Children’s Defense Fund, and I know—I know what we are capable of doing. I know we can create more good-paying jobs and raise incomes for hard-working Americans again. I know that we can finish the job of universal healthcare coverage for every single man, woman and child. I know—I know we can combat climate change and be the clean energy superpower of the 21st century. I know we can make our education system work for every one of our children, especially those who come with disadvantages. I know we can make college affordable and get student debt off the backs of young people. And I know we can protect our rights—women’s rights, gay rights, voting rights, immigrant rights, workers’ rights. I know, too, we can stand up to the gun lobby and get commonsense gun safety measures.

And how do we do that? We do that—we do that by securing the nomination, and then we do it by winning and going into that White House, as others before have, determined to push forward on the great goals and values that unite us as Americans.

AMY GOODMAN: In the Republican race, Texas Senator Ted Cruz pulled off an upset in the Iowa caucus, beating front-runner Donald Trump with 28 percent of the vote to Trump’s 24. Cruz called it a victory for conservatives.

The last seven years of having a president, having an attorney general, that demonizes you, that vilifies you, that sides with the criminals and looters instead of the brave men and women of law enforcement, that will end on January 20th, 2017. So, tonight, the state of Iowa, the Democrats here seem to be in a virtual tie, between one candidate who admits he’s a socialist and the other candidate who pretends she’s not. I wish them both luck. But I will tell you this: As Margaret Thatcher observed, the problem with socialism is eventually you run out of other people’s money.

AMY GOODMAN: Donald Trump, who went into the Iowa caucus leading in the Republican polls, attempted to downplay his second-place finish.

DONALD TRUMP: I was told by everybody, “Do not go to Iowa. You could never finish even in the top 10.” And I said, “But I have friends in Iowa. I know a lot of people in Iowa. I think they’ll really like me. Let’s give it a shot.” They said, “Don’t do it.” I said, “I have to do it.” And we finished second.

I will say this: I don’t know who’s going to win between Bernie and Hillary. I don’t know what’s going to happen with Hillary, who’s got other problems, maybe bigger than the problems she’s got in terms of nominations.

AMY GOODMAN: That was Donald Trump. Mike Huckabee has suspended his campaign. Florida Senator Marco Rubio came in third in the Republican Iowa caucus with 23 percent of the vote, behind Ted Cruz and Donald Trump. The result was well ahead of expectations, giving Rubio a boost going into New Hampshire.

SEN. MARCO RUBIO: Tonight, here in Iowa, the people of this great state have sent a very clear message: After seven years of Barack Obama, we are not waiting any longer to take our country back. This is not a time for waiting. We are going to grow the conservative movement. We are going to take our message to the people, who are struggling paycheck to paycheck, to the students living under the burden of student loans, to the families struggling to raise their children with the right values. We will take our message to them, and we will bring them to our side. When I am our nominee, we will unite our party, we will grow our party, and we will defeat Hillary Clinton or Bernie Sanders or whoever they nominate.

AMY GOODMAN: Marco Rubio, coming in a close third in the Iowa caucus, as the candidates move on to New Hampshire. When we come back, a discussion about what took place in Iowa and then the money behind the candidates. Stay with us.

After Dead Heat in Iowa, Will Clinton Move Further Left to Stop the Sanders Surge? 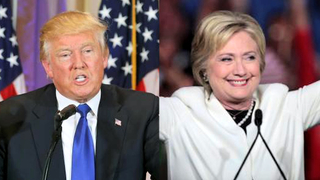