Almost 6 million people across the United States are prohibited from voting as a result of state felony disenfranchisement laws that forbid those with felony convictions to vote. Florida has the highest number of disenfranchised voters. Over 10 percent of adults in the state cannot vote because they have a felony conviction. Nearly one in four black adults is disenfranchised. We speak to Desmond Meade, president of the Florida Rights Restoration Coalition. He’s also chair of Floridians for a Fair Democracy. He is an ex-offender who is still disenfranchised.

AMY GOODMAN: As we head towards the Florida primary Tuesday, we look at all the people who will not be able to participate in the Democratic process this election season. Almost 6 million people across the country are prohibited from voting as a result of state felony disenfranchisement laws that forbid those with felony convictions to vote. Three-quarters of those now prevented from voting have been released from prison and are living in their communities either under probation, on parole or having completed their sentences. African Americans have been disproportionately impacted by the laws.

In Florida, Florida has the highest number of disenfranchised voters. Over 10 percent of adults in the state cannot vote because they have felony convictions. Nearly one in four black adults is disenfranchised. Now, this is not true all over the country. In places like Vermont and Maine, prisoners can vote from jail. How will this impact the primary and the race for the presidency?

To find out more about the implications of these voting prohibitions in Florida, we go to Miami to speak with Desmond Meade, president of the Florida Rights Restoration Coalition, also chair of Floridians for a Fair Democracy. He’s an ex-offender who was previously homeless. He’s still disenfranchised.

Welcome to Democracy Now! So, can you ever vote again, Desmond Meade?

DESMOND MEADE: Good morning, Amy. Well, according to Florida’s policy, I might not ever get that right to vote, unless something is done to change that.

AMY GOODMAN: So, explain what you’re trying to do in Florida. This is an astounding figure. One in 10 Floridians, who should be eligible to vote, are not; one in four African-American adults. Explain what the law says in Florida.

DESMOND MEADE: Well, Amy, I think that at the crux of the problem is that whenever you have politicians deciding which American citizens get to vote and which don’t, you’re always going to run into problems. And it’s going to probably fall around—along partisan lines. And so, what we’re trying to do here in Florida is that we want to take that power out of the hands of politicians and put it in the Constitution, which would allow an individual, once they’ve completed their sentence, to be able to vote.

Right now in the state of Florida, an individual will have to wait either five or seven years before—after completing their sentence, before they’re even allowed to just apply. And then, once they apply, we’re seeing application processing times of eight to 10 years. And so, you have an individual, an American citizen, waiting over 17 years, after he has completed his sentence, after he has repaid his debt to society, but yet he still cannot achieve citizenship status. And that is a blow against democracy.

AMY GOODMAN: You’ve suggested, in Florida, it’s quite easy to get a felony conviction. Can you explain that?

DESMOND MEADE: It’s extremely easy in the state of Florida. It seems like every year our legislators create more felonies. In the state of Florida, you can get a felony conviction for disturbing turtle nesting eggs, driving with a suspended license, burning a tire in public, trespassing on a construction site. And my favorite was when a gentleman released helium-filled balloons in the air. He was immediately arrested and charged with a felony offense. And that is something that so many American citizens do without even thinking about the repercussions of that, specifically in Florida.

AMY GOODMAN: Now, Desmond Meade, can you talk about your own case? Your wife is running for public office; you won’t be able to vote for her, obviously.

DESMOND MEADE: Yes. You know, that’s the ultimate slap in my face. You know, my wife, Sheena, she decided to take that bold step and run for one of the seats of the Florida House of Representatives. And, you know, it dawned on me that even though my wife is doing such a courageous act to serve her community, her husband, I can’t even vote for her.

AMY GOODMAN: So, explain what you have to go through, in your own case, how you ended up in jail, and today what you need to do to get your rights restored.

DESMOND MEADE: Well, you know, I had a drug addiction problem back in my younger days, and that caused me to go in and out of prison. At the time, I didn’t even realize that—you know, the collateral consequences that I faced by pleading guilty to a lot of these charges. But eventually, you know, in 2004, I got out of prison, and that was the last time I was ever in trouble. As a matter of fact, I took it upon myself to go above and beyond the call. You know, I went back to school. I dived into community service, dedicated my whole life to giving back to others, fighting for the homeless, fighting for the disfranchised, fighting for the children, you know, and thinking that by doing this and by excelling in school, that this country would see that I have been rehabilitated and that I am an asset to the community. Apparently everybody else thinks so but the state of Florida or the governor and his Cabinet, you know, because in spite of all that I’ve been able to overcome, to include graduating from FIU College of Law with a JD degree, I still—not only can I not vote, I can’t buy a home anywhere I want to, and I’m not even allowed to practice law, because I cannot even apply to the Florida Bar until my rights have been restored. Now, I can go to 48 other states and apply to the bar and practice law, but that just reminds me of the days of slavery, when all a slave had to do was cross a state line to get freedom. We’re in 2016. It’s time to get rid of these Jim Crow policies. An American citizen should not have to move to another state just to participate in the democratic process.

AMY GOODMAN: So, Desmond Meade, how close are you? How big is the movement in Florida to restoring voting rights there?

DESMOND MEADE: Let me tell you, Amy, people across the state of Florida are waking up, and they’re realizing that every person deserves a second chance. And I can tell you that there’s growing momentum throughout the state. Right now we’re nearing our first benchmark, which is actually getting this language, summary and title, in front of the Florida Supreme Court, so they can rule on the constitutionality of that language. We are actually less than 15,000 petitions away from triggering the legal review process. And this—we have gotten to this point purely with volunteers, no funding, just people recognizing that right is right and wrong is wrong. And it is time for Florida to stop being an outlier state, right, and to revise its policies and to step into the modern era—

DESMOND MEADE: —and understand that everybody deserves a second chance.

AMY GOODMAN: Desmond Meade, I want to thank you for being with us, president of the Florida Rights Restoration Coalition, also chair of Floridians for a Fair Democracy.

That does it for our broadcast. We have three job openings. Check our website at democracynow.org. 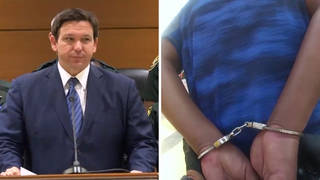