Although Thursday’s Republican debate was held in Detroit, the Flint water crisis was only brought up once, thanks to a question from Fox News moderator Bret Baier. Marco Rubio responded by praising Michigan Governor Rick Snyder. “The politicizing of it, I think, is unfair,” Rubio said, “because I don’t think that someone woke up one morning and said, ’Let’s figure out how to poison the water system to hurt someone.’ … I give the governor credit. He took responsibility for what happened.”

AMY GOODMAN: Well, let’s go to both Ted Cruz and Marco Rubio talking about Trump—talking about Detroit and then about Flint. This is Ted Cruz addressing the economic crisis in Detroit.

SEN. TED CRUZ: Detroit is a great city with a magnificent legacy, that has been utterly decimated by 60 years of failed left-wing policy. … The way you bring manufacturing back to America is, number one, you lift the regulations. As president, I will repeal Obamacare, the biggest job killer in America. I will pull back the federal regulators, the EPA and all the regulators that are killing small businesses and manufacturing. And my tax plan, which is a very, very detailed plan on the website, TedCruz.org, is what’s called border adjustable. We get rid of all the taxes. We get rid of the corporate income tax and the death tax and the Obamacare taxes and the payroll tax. And we replace it with a 16 percent business flat tax that is border adjustable, which means all exports are entirely tax-free and all imports pay the 16 percent business flat tax. That’s a 32 percent differential. What that will do, Chris, is bring millions of manufacturing jobs back to this country, bring the steel industry back to this country, create an environment where, when we compete on a fair and level playing field, American ingenuity can beat anyone. But right now the federal government isn’t giving us a level playing field.

AMY GOODMAN: The lead water crisis in Flint came up once during last night’s debate, after Fox moderator Bret Baier asked Marco Rubio about it.

SEN. MARCO RUBIO: What happened in Flint was a terrible thing. It was systemic—a systemic breakdown at every level of government, at both the federal and partially the—at both the state and partially at the federal level, as well. And by the way, the politicizing of it, I think, is unfair, because I don’t think that someone woke up one morning and said, “Let’s figure out how to poison the water system to hurt someone.” But accountability is important. I will say I give the governor credit. He took responsibility for what happened, and he’s talked about people being held accountable and the need to change. That’s Governor Snyder.

But here’s the point: This should not be a partisan issue, the way the Democrats have tried to turn this into a partisan issue, that somehow Republicans woke up in the morning and decided, “Oh, it’s a good idea to poison some kids with lead.” It’s absurd. It’s outrageous. It isn’t true. All of us are outraged by what happened, and we should work together to solve it. And there is a proper role for the government to play at the federal level in helping local communities to respond to a catastrophe of this kind, not just to deal with the people that have been impacted by it, but to ensure that something like this never happens again.

LESTER SPENCE: Yeah, I had use the bathroom when they actually made those two—this is—so, what—what Cruz—

LESTER SPENCE: What Cruz suggested is basically, again, Republican policies warmed over. It’s like you significantly reduce the—reduce regulation, significantly reduce taxes. In a number of cases—and again, this is where Chris is really good. He was suggesting that more money would be gained than there actually was money in the line item budget, right? It’s really clear that this stuff, it doesn’t work for any set of black populations—I mean, any black population, much less the white population. What’s going on in Detroit is not the result of failed Democratic policies; it’s the result of a bipartisan consensus that has been reproduced and crystallized under Republican administration. That’s it. That’s it. And you should be able to kind of sort of claim that. But they can’t, because that’s the only policy line they have. And they can’t also because the racial resentment that they’re using to pull voters, they kind of require a city like Detroit in order to be able to say, “OK, that’s an example of failed government. Vote for us.”

AMY GOODMAN: We’re going to have to leave it there, but we’re going to continue, of course, to cover all of these issues. The Democratic debate is in Flint on Sunday night. We’ll be bringing you highlights and response on Monday. And check out our website at democracynow.org. We came back recently from Flint, “Thirsty for Democracy,” bringing you the voices from the front lines of the water wars in Michigan. Lester Spence, thanks so much, professor at Johns Hopkins University, author of Knocking the Hustle: Against the Neoliberal Turn in Black Politics. And thanks so much to Brian Levin, director of the Center for the Study of Hate and Extremism at California State University in San Bernardino.

This is Democracy Now!, democracynow.org. When we come back, the murder, the assassination of a leading Honduran environmentalist. Stay with us. 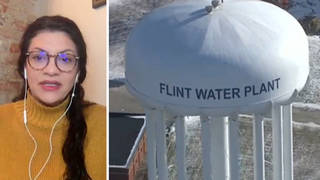