We speak with an evacuated resident of Jackson, Mississippi, where over 180,000 residents are on their third day without access to running water. We speak with longtime Jackson activist Kali Akuno, co-founder of Cooperation Jackson, who joins us from New Orleans, where he went when floods recently inundated the majority-Black city and shut down the main water plant. He attributes the water crisis to decades of white flight and the subsequent disinvestment in majority-Black and Brown cities. “What we are experiencing now is literally just the crumbling of the empire’s infrastructure,” notes Akuno, who also says he fears the state government will push to privatize or regionalize Jackson’s water system instead of giving the city adequate resources to stabilize it.

For more, we’re joined by Kali Akuno, longtime activist, co-founder and co-director of Cooperation Jackson, an organization that works to democratize the economy, empower the Black community.

Welcome back to Democracy Now!, Kali. If you can elaborate on what the mayor has just shared with us, the description of what’s happening on the ground, and how people are coming together on the ground? You had a resident, that we just played before we spoke to the mayor, saying that the state is defunding majority-Black cities and mayors.

KALI AKUNO: Well, first, it’s a pleasure to be back, Amy.

Let me describe a little bit of where I am. I’m currently in New Orleans. When the mayor issued the warning on Saturday for folks to evacuate, we took the situation very seriously and started organizing on a regional level our allies to start being able to deliver water to the city of Jackson. As the mayor noted, you know, we are not new to this situation, unfortunately. So we could anticipate that we were going to need some resources, independent of what the state was going to be able to offer and deliver, and in our case, not being — at least in our immediate community, not being reliant on the timeline, particularly of the state government, to deliver vital resources to our community. Too often they’ve declared emergencies and then not delivered, or not delivered in a substantial amount of time to actually help people on the ground. So, our organization, along with several of our allies throughout the Gulf Coast, started mobilizing over the weekend to start gathering our resources to be able to deliver to the people of Jackson in their time of need.

And it is a little bit worse than what I think we anticipated. We’ve been under these boil-water notices, I think, as the mayor noted, for months. We’ve been under many of these on a constant level for years. So there’s been a level of awareness and preparation that many people in Jackson have been attuned to for some time. But now that we’ve kind of reached this acute phase of system failure, we are going to be a bit overwhelmed. And I think the commentator that you had just talking about the situation being untenable, that is really what it is going to be like, I think, for many in our city for weeks to come.

JUAN GONZÁLEZ: And, Kali, I wanted to ask you — this infrastructure issue and the racial inequities it reveals across the country. Several years ago, we had the situation in Flint. Subsequent to that, there was the crisis in Newark’s public schools with infrastructure, again lead pipes in the water. And now we’re looking at Jackson. All of these cities are majority-Black cities. Could you talk about this situation of the inequities that occur in our system when it comes even to infrastructure?

KALI AKUNO: Well, number one, it’s not by happenstance or coincidence. What we are experiencing now is literally just the crumbling of the empire’s infrastructure. I think everybody needs to be clear about that, and that this has a long history, I think as the mayor and other commentators have noted. If you really want to trace a lot of this back, it goes back to — I would argue, to the 1950s and ’60s with the so-called urban renewal programs and the massive subsidization of the suburbs, which facilitated white flight out of many of these major cities, Jackson being one of them. And with that went major capital flight. And that has continued with very chronic programs of divestment and deindustrialization, in many cases, in most of the cities, like Jackson, which has just left crumbling infrastructure in every city that you mentioned — Newark, Flint, Detroit, we can go on. This story, this development, which was facilitated by programs which were developed on a national level right after World War II, is what brings us to this dimension of the crisis.

We also have to talk about, you know, being honest and really linking this to the deeper issue of climate change and the threat that it is clearly now posing all over the world. I mean, just listening to your introduction, we’re talking about droughts in East Africa. We’re talking about record flooding in Pakistan. We have severe drought going on in Western Europe right now and the western portion of the United States. We have to look at this — I would encourage the audience to look at all of these dynamics as a whole, and Jackson is just one of these kind of acute areas with a systemic policy around just totally subsidizing the petrochemical industry for decades now, almost a century, but particularly the United States for 50 years, is the other part of what has been driving this particular crisis, creating all of this systemic change.

And if we look at what’s being proposed on the broader level, on the one hand, you have the federal government pushing for more drilling, pushing for more kind of false solutions, as we would say in the climate justice movement, but have this aggravated infrastructure crisis everywhere, which is not adequately being addressed, in part because of the politics and where the Republicans are at on being insistent on denying climate change and being insistent on more privatized solutions, but, on the other hand, what a lot of the Democrats and the liberals are proposing are also a set of false solutions, which are based upon kind of these market dynamics which really don’t work and just continue to aggravate the inequities and the inequalities that we are facing in a city like Jackson.

JUAN GONZÁLEZ: And, Kali, we only have about 30 seconds left, but there have been attempts in the past to privatize the water supply in Jackson. Could you talk about that?

KALI AKUNO: Well, my fear — you know, the mayor talked about this coalition, and I also applaud that finally the governor has kind of come to his senses and is offering some support, but we need to be mindful of what they’re offering, I would argue, from the social movement perspective, in this effort to kind of pay for half of the costs of one facility — Jackson has two — of one of the facilities. While it will help, it’s kind of just putting a Band-Aid on the situation. And I have a fear, which I think many people in our community share, that the offer of aid is a prelude to a larger conversation of how do you fix the situation. And their offering is going to be to either privatize it, because they’re going to make an argument that Jackson does not have the capacity or capability to manage its own affairs, which is totally false, or they’re going to try to regionalize it, which is the other option of kind of a threat of divesting Jackson of its critical resources and autonomies, that has been on the table for many a year.

AMY GOODMAN: Kali Akuno, we want to thank you for being with us, co-founder and co-director of Cooperation Jackson. Of course, we’ll continue to follow this climate, class and race catastrophe that has converged in Jackson, Mississippi, where the population no longer has access to clean drinking water, to water to flush the toilet, to bathe, to use at all.

Next up, we go to Iraq, where dozens were killed in fighting after powerful Iraqi cleric Muqtada al-Sadr announced he’s resigning. Armed supporters have now started to withdraw. We’ll go to Baghdad. Stay with us. 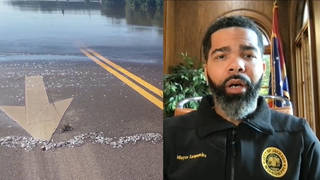