At least 30 people were killed and hundreds more injured in Iraq after armed supporters of the powerful Iraqi cleric Muqtada al-Sadr clashed with security forces in the capital of Baghdad following the cleric’s announcement Monday he would be quitting politics. The violence comes after months of political turmoil in Iraq that has seen politicians unable to form a government since parliamentary elections in October, and the prime minister said Tuesday he would “vacate his post” if the complicated political situation in the country continues. “The political parties that came to power are in reality just militias who cannot talk politics, do not understand democracy, do not understand what it means to step down once you did not win,” says Yanar Mohammed, president of the Organization of Women’s Freedom in Iraq, who joins us from Baghdad. Mohammed says the fighting fueled by the political parties “held the totality of the Iraqi people in ransom” for almost 24 hours, forcing people to stay at home “because it felt like a civil war.”

AMY GOODMAN: This is Democracy Now!, democracynow.org, The War and Peace Report. I’m Amy Goodman, with Juan González, as we turn to Iraq, where dozens were killed in fighting Monday after the powerful Iraqi cleric Muqtada al-Sadr announced he’s resigning. The Washington Post reports that, quote, “For 24 hours, loyalists … transformed the country’s government Green Zone into a front line,” unquote. At least 30 people were killed, hundreds more injured. On Tuesday, al-Sadr gave a speech calling on forces to withdraw. The fighting has now mostly stopped, and protesters supporting al-Sadr’s rivals also withdrew from their demonstration outside the government zone. Meanwhile, the Iraqi Prime Minister Mustafa al-Kadhimi said Tuesday he may vacate his post.

PRIME MINISTER MUSTAFA AL-KADHIMI: [translated] And I warn that from now on if they want to continue to stir up chaos, conflict, discord and strife and not listen to the voice of reason, I will take my moral and patriotic steps by announcing the vacancy of the position of prime minister at the appropriate time, according to Article 81 of the Iraqi Constitution, and hold them accountable before the Iraqis and before history.

AMY GOODMAN: The formation of a new Iraqi government has been paralyzed since parliamentary elections in October, where al-Sadr’s Sadrist Movement won the most seats but failed to win an outright majority. Al-Sadr’s supporters had occupied the Iraqi parliament since late July in an effort to block lawmakers from choosing a new prime minister.

For more, we go to Baghdad to speak with Yanar Mohammed, president of the Organization of Women’s Freedom in Iraq.

Welcome back to Democracy Now! The bloodletting in the last day has been horrifying. It looks like it has subsided now. It’s happened in the Green Zone, where the Iraqi parliament is, the U.S. Embassy, other embassies and government buildings. Can you talk about the significance of what’s taken place, who is fighting, and what this means for the future?

YANAR MOHAMMED: The significance of it reminded us that the powers that came — the political parties that came to power are in reality just militias who cannot talk politics, do not understand democracy, do not understand what it means to step down once you did not win. So, the only way they could resolve this problem was to go down to the streets, to invade the presidential palace and the parliament. And in the last day, they took all their machine guns and their heavy machinery with them, and they held the totality of the Iraqi people in ransom. All of us lost our well-being and were scared. We ran to our homes. People bought as much bread as they could to keep it at home, because it felt like a civil war, like the launching of a civil war. We were reminded that those who are in power do not care about the well-being of the people and that they are using every single way possible just to gain power. They don’t care about people’s lives, about our well-being.

And a piece of information here: It did not stay only in the Green Zone, the clashes. The clashes were around the city of Baghdad and in the — not in the governmental buildings but in the centers of the political parties in the other cities also. So, for almost 24 hours, we had to live again the situation of war, where we were all in terror, helpless, sitting in the homes and glued to our televisions, just waiting for a word to come from the leaders of trouble for us to go back to our normal life.

And the strange thing is that those who started the demonstration that led to the clashes, to the killing and to the bombing around the city, nobody dares to challenge them or to speak any bad word against them. It’s as if I’m living the days of Saddam Hussein all over again, where everybody is scared of a single person, and nobody dares to say anything. It’s a terrible situation.

I know that in the West, everybody watches series. But this series of terror that the Iraqi people are living in are endless — since the occupation, since Bush the father, then Bush Jr., and then the sectarian war, and now this. We do not deserve to live in this situation. I’m sitting at work now, and we don’t have electricity. We had to bring our own gadget to make electricity. After 19 years, after occupation, we still do not have electricity. We have to dig a well to be able to water our garden. Iraq, although it has the resources that can provide money for three or four countries in a rich situation, but we are living in poverty. We are barely making ends meet.

And those who are in power — and they did not come to power by accident. Iraq was planned to have a theocracy in power, a part of which is supported by the Islamic Republic of Iran, and the other part is local but is a cult-like medieval power. And those two powers both have very strong militias that took all their machine guns, their mortar bombs, and they began to shoot each other. And once some of them shot over the American Embassy in the Green Zone, the C-RAM system took the mortars and shot them back at the city from where the shots came. So, we lived one day of total terror. We had flashbacks of what we have been through during the first American occupation, and then the second one. And it seems Iraq is meant to be living in these situations for a very long time ahead.

JUAN GONZÁLEZ: And, Yanar Mohammed, could you — supposedly, Muqtada al-Sadr’s party won the largest number of seats but has not been able, for months and months, to form an actual government. Could you talk about why there’s been so much difficulty through the legislative route trying to form a government that can begin to address some of the needs of the Iraqi people?

YANAR MOHAMMED: The government, the way it was put together in the first place, and which dragged on and on during the next round of elections, it was meant to gather a big majority in order to form the government. And that big majority, the number of seats that he needed to form the government, he couldn’t get. And in the same time, these two biggest Islamic Shia factions have had a history of fights amongst each other. So, had they been together, the government would have been in place now and working and functional. But because they cannot reach to an agreement, Muqtada al-Sadr, when he joined his efforts with the Sunni blocs and the Kurdish blocs, the party from Erbil — we call it the party, it’s the KDP from Erbil — their number was not even enough to put together a government.

And once he couldn’t, this man cannot take “no” as an answer. Once he couldn’t put together the government, he ordered — and I say it, “ordered” — all his party, or all his slate members, to withdraw from the government, and with no discussion at all. He just spoke of it at night, and he told everybody to step out of the government. And once he stepped out of the government and it was time for the others to put the government together, he still couldn’t take “no” for an answer, and he took all his followers into the streets with a demonstration for a whole month. And when it didn’t bring any results, because the judiciary ruled that the government can still be formed with the others, he started fighting. He says something new every other day, and nobody dares to challenge him. I mean, it’s a terrible situation.

AMY GOODMAN: And he’s quit before and come back. And to be clear, this is fighting between Shia militias. But I wanted to ask you — we only have a minute, and I wanted to ask — while a lot of attention is being put on the U.S., the first anniversary of the U.S. pulling out of Afghanistan, the U.S.'s longest war, the U.S. has thousands of troops in Iraq, what, something like 2,500, in this 19th year of the occupation of Iraq, U.S. occupation. What role does the U.S. play in this? And that's where we’ll end.

YANAR MOHAMMED: They do not play a strong role. There’s a general feeling that the negotiations between the U.S. and Iran, and all the pressure from both sides, is being implemented in the lands of Iraq, because Nouri al-Maliki’s bloc, who is fighting against Muqtada al-Sadr, is a proxy of the Islamic State of Iran, while Muqtada al-Sadr and the blocs around him are on the other side. Muqtada al-Sadr’s group is meant to be like local, but his other groups are supported by the American side. So, we are being sandwiched between the two, and it doesn’t seem that there is any solution anytime soon.

AMY GOODMAN: Yanar Mohammed, we want to thank you for being with us, president of the Organization of Women’s Freedom in Iraq, speaking to us from Baghdad.

Coming up, as President Biden calls for an assault weapons ban and more funding for police, we’ll talk to UCLA professor Robin D. G. Kelley. The publication of the 20th anniversary of his book Freedom Dreams: The Black Radical Imagination, the book has just come out. Stay with us. 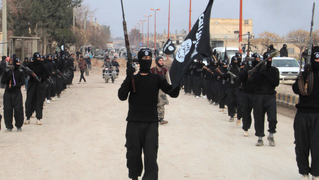