With the New York primary less than a week away, the race for the Democratic nomination continues to heat up. Hillary Clinton and Bernie Sanders will meet Thursday in Brooklyn for their first debate in over a month. We begin today’s show looking at Hillary Clinton and Honduras. Earlier this week, the former secretary of state publicly defended her role in the 2009 coup in Honduras that ousted democratically elected President Manuel Zelaya. Since the coup, Honduras has become one of the most violent places in the world. Clinton was asked about Honduras during a meeting with the New York Daily News editorial board on Saturday. The question was posed by Democracy Now!’s own Juan González.

AMY GOODMAN: With the New York primary less than a week away, the race for the Democratic nomination continues to heat up. Hillary Clinton and Bernie Sanders will meet Thursday in Brooklyn for their first debate in over a month. We begin today’s show looking at Hillary Clinton and Honduras. Earlier this week, the former secretary of state publicly defended her role in the 2009 coup in Honduras, when the military seized democratically elected President Manuel Zelaya in the middle of the night, deposed him and sent him into exile. Since the coup, Honduras has become one of the most violent places in the world. Clinton was asked about Honduras during a meeting with the New York Daily News editorial board on Saturday. The question was posed by Democracy Now!’s Juan González.

JUAN GONZÁLEZ: Secretary Clinton, I’d like to ask you, if I can, about Latin America—

JUAN GONZÁLEZ: —and a policy specifically that you were directly involved in: the coup in Honduras.

JUAN GONZÁLEZ: As you know, in 2009, the military overthrew President Zelaya.

JUAN GONZÁLEZ: There was a period there where the OAS was trying to isolate that regime. But the—apparently, some of the emails that have come out as a result of State Department releases show that some of your top aides were urging you to declare it a military coup, cut off U.S. aid. You didn’t do that.

JUAN GONZÁLEZ: You ended up negotiating with Óscar Arias a deal for new elections.

JUAN GONZÁLEZ: But the situation in Honduras has continued to deteriorate.

JUAN GONZÁLEZ: There’s been a few hundred people killed by government forces. There’s been all these children fleeing, and mothers, from Honduras over the border into the United States. And just a few weeks ago, one of the leading environmental activists, Berta Cáceres, was assassinated in her home.

JUAN GONZÁLEZ: Do you have any concerns about the role that you played in that particular situation, not necessarily being in agreement with your top aides in the State Department?

HILLARY CLINTON: Well, let me again try to put this in context. The Legislature—or the national Legislature in Honduras and the national judiciary actually followed the law in removing President Zelaya. Now, I didn’t like the way it looked or the way they did it, but they had a very strong argument that they had followed the Constitution and the legal precedents. And as you know, they really undercut their argument by spiriting him out of the country in his pajamas, where they sent, you know, the military to, you know, take him out of his bed and get him out of the country. So this was—this began as a very mixed and difficult situation.

If the United States government declares a coup, you immediately have to shut off all aid, including humanitarian aid, the Agency for International Development aid, the support that we were providing at that time for a lot of very poor people. And that triggers a legal necessity. There’s no way to get around it. So, our assessment was, we will just make the situation worse by punishing the Honduran people if we declare a coup and we immediately have to stop all aid for the people, but we should slow walk and try to stop anything that the government could take advantage of, without calling it a coup.

So, you’re right. I worked very hard with leaders in the region and got Óscar Arias, the Nobel Prize winner, to take the lead on trying to broker a resolution without bloodshed. And that was very important to us, that, you know, Zelaya had friends and allies, not just in Honduras, but in some of the neighboring countries, like Nicaragua, and that we could have had a terrible civil war that would have been just terrifying in its loss of life. So I think we came out with a solution that did hold new elections, but it did not in any way address the structural, systemic problems in that society. And I share your concern that it’s not just government actions; drug gangs, traffickers of all kinds are preying on the people of Honduras.

So I think we need to do more of a Colombian plan for Central America, because remember what was going on in Colombia when first my husband and then followed by President Bush had Plan Colombia, which was to try to use our leverage to rein in the government in their actions against the FARC and the guerrillas, but also to help the government stop the advance of the FARC and guerrillas, and now we’re in the middle of peace talks. It didn’t happen overnight; it took a number of years. But I want to see a much more comprehensive approach toward Central America, because it’s not just Honduras. The highest murder rate is in El Salvador, and we’ve got Guatemala with all the problems you know so well.

So, I think, in retrospect, we managed a very difficult situation, without bloodshed, without a civil war, that led to a new election. And I think that was better for the Honduran people. But we have a lot of work to do to try to help stabilize that and deal with corruption, deal with the violence and the gangs and so much else.

AMY GOODMAN: That was Democratic presidential hopeful Hillary Clinton responding to a question from Democracy Now!'s Juan González on Saturday during her meeting with the New York Daily News editorial board. Juan later wrote about the exchange in a column for the Daily News titled “Clinton's Policy was a Latin American Crime Story.” We’ll link to it on our website. 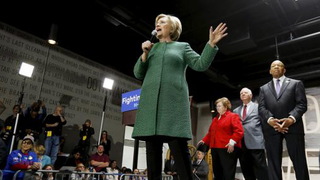