As President Obama becomes the first sitting U.S. president to visit the city of Hiroshima, we look back at the devastation caused by the U.S. bombing on August 6, 1945. It was the first time a nuclear bomb had been dropped in history. At the time, Setsuko Thurlow was a 13-year-old student at the girls’ school. At 8 a.m. that morning, she was on the second floor of the school’s building, about one mile away from the site that was about to become ground zero. She recalls seeing a bluish white flash through the window. Moments later, she was falling through the air as the building was flattened by the blast. For the rest of her life, Setsuko has organized against nuclear weapons. We’re joined now by Setsuko herself.

JUAN GONZÁLEZ: President Obama has become the first sitting U.S. president to visit the Japanese city of Hiroshima since U.S. warplanes dropped the first atomic bomb on August 6, 1945. The bombing killed 140,000 people, and another 100,000 were seriously injured. He spoke today at the Hiroshima Peace Memorial Park. We’re now joined by Setsuko Thurlow, who is a survivor of the U.S. bombing of Hiroshima in 1945. She’s a longtime anti-nuclear activist who lives in Toronto, Canada, where she joins us.

Setsuko Thurlow, welcome to Democracy Now! Could you take us back to that day, you as a child in Hiroshima, and tell us what happened?

SETSUKO THURLOW: Well, I was a 13-year-old, grade eight student at the girls’ school. And I was mobilized by the army, like together with a group of about 30 schoolmates. And we were trained to act as decoding assistants. And that very day, being Monday, we were to start the day’s work, the full-fledged decoding assistant. At 8:00, we had a morning assembly, and the Major Yanai gave us a pep talk. And we said, “We will do our best for emperor’s sake.” And at the moment, I saw the bluish white flash in the windows. I was on the second floor of the wooden building, which was one mile, or 1.8 kilometers, away from the ground zero. And after seeing the flash, I had a sensation of floating in the air. All the buildings were flattened by the blast and falling. And, obviously, the building I was in was falling, and my body was falling together with it. That’s the end of my recollection.

Then I regained my consciousness. And when I regained, I found myself in a total darkness and a silence. I tried to move my body, but I couldn’t. So I knew I was faced with death. I thought, “Finally, Americans got us.” Then I started hearing the whispering voices of my classmates who were around me in the same room: “Mother, help me. God, help me.” And all of a sudden, strong male voice said, “Don’t give up. I’m trying to free you. Keep moving. Keep pushing. And you see the sun ray coming through that opening. Get moving toward that direction. Crawl.” That’s what I did in the total darkness. I didn’t see anything.

But by the time I came out, the building was on fire. That meant all my classmates who were with me, about 30 of them, were burned to death alive. And I and two other girls managed to come out. The three of us looked around outside. And although it happened in the morning, it was dark, dark as twilight. And as our eyes got used to recognize things, those dark moving objects happened to be human beings. It was like a procession of ghosts. I say “ghosts” because they simply did not look like human beings. Their hair was rising upwards, and they were covered with blood and dirt, and they were burned and blackened and swollen. Their skin and flesh were hanging, and parts of the bodies were missing. Some were carrying their own eyeballs. And they collapsed onto the ground. Their stomach burst open, and intestines start stretching out.

The soldiers said, “You girls join that procession. Escape to the nearby hillside.” Well, we learned how to step over the dead bodies, and escaped. By the time we got to the hillside, at the foot of the hill was a huge army training ground about the size of two football fields, quite a big place. The place was packed with dead bodies and dying people, injured people. And people were just begging in whisper. Nobody was shouting in strong voice, just a whisper: “Water please. Water please.” That’s all the physical and psychological strength left. They just whispered.

We wanted to be of help to them, but we had no bucket and no cups to carry the water. And we found ourselves relatively lightly injured. So he went to the nearby stream, washed off our dirt and the blood, and tore off our blouses, soaked them in the water, and dashed back to the dying people. We put the wet cloth over their mouth, and who desperately sucked in the moisture. That was the level of rescue relief work we were able to offer. Nothing else. I looked around to see if there were doctors or nurses helping. I saw none in that huge place. Of course, the doctors and nurses were killed, too. But a small number of remaining surviving people were working somewhere else. So thousands of thousands of people at the place where I was, they had no medication, no water even and no medical attention or anything. That’s how most of the people died.

And when the darkness fell, we three girls sat on the hillside and all night watched the city burn, feeling stunned and numbed from watching the massive death and suffering all day. We weren’t feeling. We weren’t responding appropriately emotionally. We were not able to. And it was a good thing we were not able to respond emotionally. If we did, we couldn’t have survived for each horror we had to witness that day.

AMY GOODMAN: Setsuko Thurlow, talk about the days that followed, the effects on people not just of the immediate bombing that killed so many, but then the radiation effects.

SETSUKO THURLOW: My father was out of town, so he saw the rising mushroom cloud, and he came back to the city. And my mother was doing the dishes after breakfast, and she was rescued. So I was lucky. I had both parents. Later on, we moved to outside of the city and where my uncle fed us, housed us and fed us and clothed us. We were lucky. Not many people had that kind of luck. They just spread a piece of old paper or cloth on the ground, and that’s where they slept, without knowing anything about the effects of radiation from the contaminated ground.

But we found that my sister and her four-year-old child were on their way to the doctor. They were walking over the bridge in the central part of the city that day. And they were badly, badly burned. And we saw them the next day. We could hardly recognize them, only by their voices. And according to my mother, by the special hairpin she had in her hair, she recognized it was she. But anyway, she survived for four days, four nights, and the child died shortly after. But we supposedly looked after them, but we didn’t have anything to give except some fluid.

And my sister-in-law was directing student work in the center part of the city. There were about 8,000 grade seven and grade eight students from all the high schools working in the center part of the city, just below the detonation. And they are the ones who simply vaporized, melted and carbonized. And my father and I looked for the body of my sister-in-law, who was directing the students there. We never found them. She’s still missing on paper. But we were so happy my favorite uncle and aunt survived, we heard, and they were outside of the city. And they had not—

JUAN GONZÁLEZ: Setsuko, if I can interrupt you for one second, we only have about 30 seconds. Could you respond to the visit of President Obama to Hiroshima, the importance of it for you?

SETSUKO THURLOW: For me? Yes, because his presence satisfies many people, because he went to the cenotaph and paid respect. I think that was very satisfying to many survivors. But the message part, everybody anticipated a great message. So did I. But, of course, it was a huge disappointment once again. He made a beautiful speech in Prague, and I guess we were all hoping something like that would happen. It didn’t happen. It was a huge—anyway—

AMY GOODMAN: Setsuko Thurlow, we want to thank you for being with us. We’ll continue this conversation and post it online at democracynow.org. 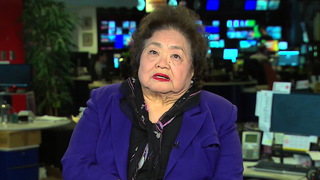