Thousands have gathered in Louisville, Kentucky, hometown of Muhammad Ali, to mourn the death of one of the most iconic figures of the 20th century. Ali was considered by many to be the greatest boxer of all time, but he will also be remembered for his activism against racism and war. Former President Bill Clinton, comedian Billy Crystal and journalist Bryant Gumbel are expected to deliver eulogies. On Thursday, an estimated 14,000 attended Ali’s Islamic prayer service. Muslim advocate Dalia Mogahed addressed the mourners, and she joins us to discuss Ali’s life and legacy. “We are de-Islamicizing Ali” by praising his stances, but not giving credit to his faith which was “central to his worldview,” says Mogahed, the director of research at the Institute for Social Policy and Understanding, one of two Muslim members of President Obama’s faith advisory council. After Republican presidential front-runner Donald Trump, joined in praising Ali this week, Mogahed argues, “We can’t both love Ali and honor him, and say we should ban Muslims from America.”

StoryJun 10, 2016Dave Zirin on the Whitewashing of Muhammad Ali: He Wasn’t Against Just War, But Empire

AMY GOODMAN: Thousands are gathering in Louisville, Kentucky, for the funeral of Muhammad Ali today, one of the most iconic figures of the 20th century. Ali died Friday in Arizona after suffering for decades from Parkinson’s syndrome. He was considered by many to be the greatest boxer of all time, but he will also be remembered for his activism against racism and war. This morning in Louisville, where Ali was born and raised, a funeral motorcade will pass by his boyhood home. Later today, mourners across the world will gather for an interfaith service to pay their final respects. Former President Bill Clinton, comedian Bill Crystal and journalist Bryant Gumbel are expected to deliver eulogies. On Thursday, an estimated 14,000 attended Ali’s Islamic prayer service. Muslim scholar Dr. Sherman Jackson addressed the mourners.

AMY GOODMAN: Dalia Mogahed also addressed the mourners—the mourners at the Islamic funeral, and we’ll hear from her in a moment.

But in his prime, Muhammad Ali was an outspoken advocate of the Black Muslim movement and critic of the Vietnam War. He first became known to the world in 1960, when he won the Olympic gold medal for boxing. Four years later, he became the heavyweight champion of the world. On the next day, the then-Cassius Clay shocked the sports world and announced he was joining the Nation of Islam and changing his name. After briefly being named Cassius X, Nation of Islam leader Elijah Muhammad renamed him Muhammad Ali. For years, many news outlets refused to refer to the boxer by his new name, instead using what Ali called his slave name. Muhammad Ali grew close to Malcolm X. He became a vocal critic of U.S. actions at home and abroad.

After his conscientious objector status request was denied in April 1967, he refused induction. Ali’s title was stripped from him. He was sentenced to a five-year prison term. He appealed all the way to the U.S. Supreme Court, and in 1971 his conviction was finally reversed. He did not go to prison, but was forced to wait four years before regaining his boxing license. In 1974, Ali reclaimed the world heavyweight champion title. He went on to fight several matches overseas, became involved in world affairs. You can see our hour-long special about his life and legacy at democracynow.org.

But right now we’re going to Muhammad Ali’s hometown, Louisville, Kentucky, where the funeral is just about to begin. We’re joined by two guests who will be there. Dalia Mogahed was one of the speakers at Thursday’s Islamic funeral. Mogahed is the director of research at the Institute for Social Policy and Understanding, one of two Muslim members of President Obama’s faith advisory council. And Dave Zirin is with us, sports editor for The Nation magazine. His recent article, “'I Just Wanted to Be Free': The Radical Reverberations of Muhammad Ali.” He’s the author of the Ali-themed book, What’s My Name, Fool? Sports and Resistance in the United States.

We welcome you both to Democracy Now! Dalia Mogahed, you were only one of three, including the imam, who spoke at the Islamic funeral, the prayer service yesterday. What did you say?

DALIA MOGAHED: What I said was that Muhammad Ali taught us how to be free. He taught us how to be free by relinquishing our attachments to the world. He owned fame and fortune, and never allowed it to own him. And that’s why he was able to stand with principle above popularity and chose conscience above conformity. And it was in this way that he freed himself and acted as a symbol and as an example for how we can all free ourselves, through his spirituality.

AMY GOODMAN: Can you talk about his name, Muhammad Ali, what it means and how he got it?

DALIA MOGAHED: Absolutely. He got his name because it was given to him by his religious leader, the Honorable Elijah Muhammad. It means—Muhammad, the name, means praise in the heavens and the earth. And one of the themes of my brief remarks yesterday was that he—that that funeral, with people from all over the world, every color and creed, were a testimony to the fact that he was praised in the heavens and the earth, but that he wasn’t always that way. He, for some time, was rejected by the public, was demonized. But because he stood with his principles, God’s promise came true, which said that if you put God first, he will make the people love you. And his name actually was a testimony to that, praised by God and by the people.

AMY GOODMAN: What is the legacy, Dalia, of African Americans accepting Islam in America? Talk about Muhammad Ali and Islam. Seems very much—it’s odd to use the term “the white elephant in the room.”

DALIA MOGAHED: Well, it’s interesting, Amy, how much we are commemorating Muhammad Ali, praising his stance and his conscientious objector status, his principle, and yet completely ignoring the source of that strength, which was his Islamic faith. We are de-Islamicizing Ali. Interestingly, at the time, Islam was being blamed for his stance, which was so unpopular. Today, we are praising it, but not giving Islam and his spirituality any credit. This faith was central to his worldview. It was where he drew his strength from. And I think that that legacy of indigenizing Islam, of making Islam a part of mainstream America, is so important today. Ali is a reminder that Islam enriches America, that America would be a weaker, less prosperous, less safe country if Islam was not part of its story.

AMY GOODMAN: It is interesting that people like—if there’s anyone like Muhammad Ali, are marginalized during their prime years, but later idolized. Are you concerned that the iconization of Muhammad Ali will leave out the—what you are most drawn to about him? And if you can talk about what that is?

DALIA MOGAHED: You know, what I am most drawn to is his strength of character, his clear moral compass, that even in the hardest times of his life, even when he had to walk away from things he had worked for his whole life, he was able to do that. And today we look back on him, and it’s this whitewashing. It’s this revisionism of who he was, where we want to be very comfortable. You know, so many things about Muhammad Ali today would make us uncomfortable, the first being his Muslim faith, something that we are, as a country, now so comfortable demonizing. And so, we can’t both love Ali and honor him, and say we should ban Muslims from America. It’s not possible. We can’t have both of those realities coexist. So, if we honor Ali today, we have to, at the same time, recognize the contribution of Islam and Muslims to the United States. And my concern is not that we honor him as an icon—I think that we should, and he is. He was called—Sports Illustrated called him the Sportsman of the Century. He is an icon. But with that, we have to take the whole Ali. We can’t pick and choose, and we can’t revise him to what makes us comfortable.

AMY GOODMAN: We’re going to break and then come back to this discussion. But very quickly, Dalia, you were one of the three speakers, including the imam, at Muhammad Ali’s Islamic funeral, Jenazah. Can you explain what that is, how that is different from what will happen today? Muhammad Ali left very strict instructions that he wanted for his funeral, and, first and foremost, for it to be open to the public.

DALIA MOGAHED: It was exactly that. This—so, the Jenazah prayer is a very simple, basically, ritual. And it’s a prayer that Muslims offer for the deceased. And it’s something that the deceased actually has a right on the Muslim community. We have to gather and offer this prayer for people when they die. And he had very strict—a very strict outline of how that should be and that it should be open to anyone who wants to attend. So it wasn’t just Muslims, right? It was—people of all faiths attended this service. Muslims were the ones that engaged in the actual prayer, and everyone else was there welcomed to observe.

It was done in Freedom Hall, where he fought his first professional fight in Louisville. And it was really quite stunning to me, standing there, waiting to speak, one of three speakers, and looking at the front row of this funeral prayer. It was a who’s who—celebrities, heads of state—President Erdogan was in the front—Louis Farrakhan and others. And yet the three people asked to give remarks were, you know, three ordinary people. We weren’t heads of state or celebrities. And I thought, only at Muhammad Ali’s funeral would this be possible. It was truly a testimony to his character.

AMY GOODMAN: Dalia Mogahed, one of the three speakers at Muhammad Ali’s funeral Thursday, one of two Muslim members of President Obama’s faith advisory council. She is director of research at the Institute for Social Policy and Understanding. When we come back, we’ll also be joined by Dave Zirin, who’s written extensively about Muhammad Ali. Among his books, oh, What’s My Name, Fool? Sports and Resistance in the United States. Stay with us.

NEXTDave Zirin on the Whitewashing of Muhammad Ali: He Wasn’t Against Just War, But Empire 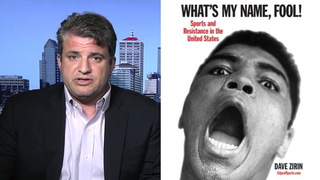