As a split Supreme Court blocks President Obama’s Deferred Action for Parents of Americans program, or DAPA, which would have shielded millions of immigrants with U.S. citizen or permanent resident children from deportation, we speak with an undocumented activist, Maru Mora Villalpando, and her daughter, Josefina Mora, who is a U.S. citizen. “Those who are undocumented have to take this disappointment” from the ruling “and turn it into anger” to push Obama to stop deportations and to try again to reform immigration policy.

StoryDec 28, 2020“I Just Felt Like I Had No Control Over My Body”: Survivors of Alleged ICE Medical Abuse Speak Out

AMY GOODMAN: I want to bring in Maru Mora Villalpando. What happens to you now? Explain what this means for you as a mother of a U.S. citizen, Josefina Mora. Explain what the Supreme Court decision—how it will affect you.

MARU MORA VILLALPANDO: Thank you. Well, it keeps me the same as I’ve been in these past 20 years: trying to avoid police, ensuring that my daughter knows everywhere I go, creating a network that will support me in case I get detained and placed in deportation proceedings. So, our lives continue pretty much the same, being just, you know, the result of these political games. This is what me and millions of parents, and even those that are not parents, that are being excluded from DACA and DAPA, will have to continue facing.

JUAN GONZÁLEZ: And, Josefina Mora, your—as you hear the presidential race proceeding, the arguments over immigration, the refusal of Republicans to act on comprehensive immigration reform, what’s your sense of what you, as a person here in the United States, has to do in the coming months?

JOSEFINA MORA: Well, I think that it’s important—the elections are incredibly important. And I feel lucky that, as a U.S. citizen—and it is my first year voting, actually, so I think that it’s going to be a tough election year. But I think, aside from elections, it is really important to use my privilege as a U.S. citizen to organize my community, not only within the Latino community, but within the white community, because I am surrounded by a lot of white people. I think that especially those who are undocumented have to take this disappointment and turn it into anger. I think that that anger needs to show into organizing and to pushing Obama not only to stop deportations, but to really try again, in this little time that he has left, to do something on immigration, because this is unacceptable. This decision really represents the racism that this country was founded on and the racism against the president, as well, because they are trying to block every action that he is trying to do.

AMY GOODMAN: Josefina, you were arrested at a Trump rally in May in Washington state?

JOSEFINA MORA: I was.

AMY GOODMAN: And why were you there protesting? How old are you, by the way?

JOSEFINA MORA: I’m 18. I just turned 18, so I’ll be 19 this year. I participated in that rally because I wanted my community to know that we will not allow bigotry to be in our community, because more—it’s bigger than the Trump campaign, really. It’s just representing a country that’s founded on hate, on racism, on the taking of native peoples’ land. We want to remind people that this land really is the native peoples’ land, and we shouldn’t be having—immigrants shouldn’t be having to ask permission for the U.S. government to allow them to stay; really, it should be the native people. So our message was make Lynden, which is where he was, Coast Salish again, which is the native peoples’ original name for the land. And so, it was really important for me to represent, not only as a citizen of this country, but as a daughter of immigrants, that we will not allow bigotry and hatred into our community, on especially a town that’s so historically racist.

JUAN GONZÁLEZ: And I wanted to go back to Thomas Saenz for a moment. The DACA that President Obama first promulgated several years ago, in terms of young people brought to this country as undocumented, that was not at all affected by this particular battle that rose up from Texas and went to the Supreme Court and got deadlocked, right?

THOMAS SAENZ: That’s correct. The 2012 Deferred Action for Childhood Arrivals remains in place, and those who are eligible really should continue to apply for renewal, for new applications. That is still available and is an avenue to obtain work authorization. So far, over 700,000 immigrants have obtained deferred action through DACA, and that should continue. All that was at issue in this case was the new initiative of Deferred Action for Parents of Americans and an expansion of eligibility for the pre-existing DACA initiative.

JUAN GONZÁLEZ: But Donald Trump, who is the presumptive Republican nominee, has vowed to reverse DACA if he is elected, correct?

THOMAS SAENZ: Well, that’s the problem. Deferred action programs are an exercise of prosecutorial discretion, so any president, this president or his successor, could choose to end deferred action, or could choose to limit it in any way, which is why we really need our government to do its job by enacting immigration reform, as we have been expecting for well over a decade. But it’s an emblem of the continued dysfunction that we now have not only a Congress that can’t act on immigration reform, but a Senate leadership that refuses to act on a nominee to the Supreme Court, and, by consequence, a deadlocked Supreme Court on one of the most critical issues facing the country.

AMY GOODMAN: I want to thank Maru Mora and Josefina Villalpando for joining us from Seattle, Washington. 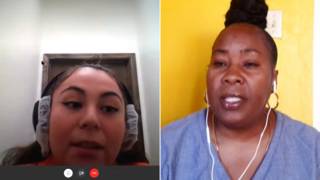 “I Just Felt Like I Had No Control Over My Body”: Survivors of Alleged ICE Medical Abuse Speak Out