In West Virginia, at least 23 people have died in once-in-a-thousand-year flooding. West Virginia Governor Earl Ray Tomblin has declared a state of emergency in 44 counties and has deployed the National Guard to help with search and rescue efforts. A number of people remain missing across the state. The severe rainfall inundated large parts of the town of Richwood, submerging cars and the first floors of many houses and businesses. We speak with Bob Henry Baber, the mayor-elect of Richwood, West Virginia, and the first member of the Mountain Party to be elected to public office in the state.

AMY GOODMAN: We’re going to go across the country now to Bob Henry Baber, the mayor-elect of Richwood, West Virginia. Can you talk about what has happened, this once-in-a-thousand-year flood? And place first where Richwood is, since you seem to be in the middle of this.

MAYOR-ELECT BOB HENRY BABER: Richwood sits at the base of the Monongahela National Forest. It’s kind of remote, a small little—well, we were a mining town. We were one of the first towns to suffer from the loss of coal jobs. And, well, what else can I tell you?

AMY GOODMAN: Well, tell us what’s happening. Tell us the experience of this flood. When did it start? We understand at this point that you believe 23 people have been—have died.

MAYOR-ELECT BOB HENRY BABER: Well, we, in Richwood, were very fortunate, it turns out. We had a nursing home that had 90 people in it. The floodwater—we had about nine inches of rain in 12 hours. The floodwaters came up so fast and so hard that, on the last flash flood—it kind of came in a series—that we had 90 people in a nursing home that had to be, literally, in their wheelchairs and beds and cots, you know, handed through water that was chest high on our volunteers. But fortunately, we, here in Richwood, we—our city is ripped in half, absolutely, but we did not have any loss of life, so we are really blessed. Nearby Rainelle and White Sulphur Springs is where major loss of life has also occurred, and they even had more flooding. Rainelle flooded twice. It flooded last night again.

AMY GOODMAN: On Monday, West Virginia Governor Earl Ray Tomblin expressed concern about West Virginia’s recovery while many are without jobs, due to damaged businesses.

GOV. EARL RAY TOMBLIN: There are thousands of homes that, in my opinion, will not be inhabitable again, thousands of other ones that will need some kind of rehab done to them or fixing up. And, yeah, same thing with businesses. … The thing that, you know, concerns me as much as anything else, considering our current economy in West Virginia, with the amount of people we’ve got laid off, the high unemployment rates and so forth, especially in the coal fields, that now, with all these small businesses, who employ about 90 percent of our people—small businesses, generally—with all these businesses closed down, we’ve got people now without jobs.

AMY GOODMAN: That’s Governor Earl Ray Tomblin. Dr. Bob Henry Baber, you are the first person—first member of the Mountain Party to be elected to public office in West Virginia. Can you talk about what you stand for in the Mountain Party?

MAYOR-ELECT BOB HENRY BABER: Well, what we stand—the number one thing we stand for is putting an end to mountaintop removal, which has been the worst thing that’s ever happened to West Virginia. It’s strip mining on steroids. We stand for a transition to a tourist economy, to an economy that people have work in. We have no jobs in West Virginia. The state has been a colony to the coal, oil, timber and gas companies for a hundred years—over a hundred years. We’re—we’ve got hard-working people, beautiful scenery. We’re the Colorado of the East. And we’re in a three-legged race with Mississippi to see who can be the poorest and unhealthiest state in the nation, and it’s because the politicians have been in cahoots, frankly, for a century with the extractors.

AMY GOODMAN: And do you see that relating to this once-in-a-thousand-year flood that you’re experiencing right now?

MAYOR-ELECT BOB HENRY BABER: Well, it does relate, in a number of different ways. I mean, we do have a mountaintop removal site up and above Richwood. There’s been a massive clearcutting here. Now, I’m not going to put—I don’t want to put the whole onus on that. I mean, we had a lot, a lot of rain. But these are aggravating factors. It’s complex. But the city of Richwood was already completely devastated economically even before this flood came. Ninety-nine percent of our children are on free or reduced lunch. There’s no jobs in Richwood. Yeah, and we have drug problems. Why? Because the teenage—there’s no work. There’s no work for anybody. And those few that get through the schools that are smart go off to college, they get their degrees, and they’re out of West Virginia.

MAYOR-ELECT BOB HENRY BABER: Could you ask me that again?

AMY GOODMAN: Yes, for Richwood, which used to be the clothespin capital of the world, I understand.

MAYOR-ELECT BOB HENRY BABER: Oh, well, we are unique among the 75 dying coal towns of West Virginia, East Kentucky and Southwest Virginia, in the fact that we sit at the foot of a national forest. Everything is for sale in the town for—literally. We had a wonderful historic district here. We are a federal historic district. Fifty empty stores on Main Street, but a couple—a couple of them are starting to come back organically. We have a wood mill here. We need to do value-added wood. There’s a lot of things we can do here, but, you know, the state has just simply not been supportive of looking at any kind of alternative green visions. So, my mayorship and Richwood is a bit of an anomaly in the system, in that my election is almost a curiosity, because the state is becoming redder and redder and redder. Yet—

AMY GOODMAN: Well, we’re going to have to leave it there, but we will certainly follow your mayoralty. Bob Henry Baber, mayor-elect of Richwood, West Virginia, West Virginia which is experiencing a once-in-a-thousand-year flood. Ken Pimlott, director of California Department of Forestry and Fire Protection, thanks for joining us. And Professor Michael Mann. That does it for our broadcast. We have job openings. Check our website. 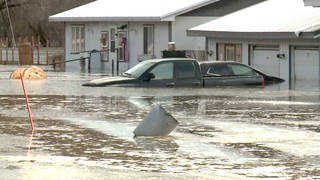