Green Party presidential candidate Jill Stein takes aim at the presumptive nominees of both major parties, Donald Trump and Hillary Clinton. “Trump says very scary things—deporting immigrants, massive militarism and ignoring the climate. Hillary, unfortunately, has a track record for doing all of those things,” Stein says. “Hillary has supported the deportations of immigrants, opposed the refugees—women and children coming from Honduras, whose refugee crisis she was very much responsible for by giving a thumbs-up to this corporate coup in Honduras that has created the violence from which those refugees are fleeing.” Stein goes on to say, “We see these draconian things that Donald Trump is talking about, we actually see Hillary Clinton doing.”

JUAN GONZÁLEZ: And, Jill Stein, what do you say to those, for instance, who criticize third-party efforts as spoiler efforts throughout the history of the country—Ross Perot running in the early ’90s with the result that Bill Clinton was able to defeat the Republican candidate, then, of course, Ralph Nader in the 2000 race, blamed by some, although others disagree that that was the result, for resulting in George Bush being elected in 2000?

DR. JILL STEIN: So, let me say first off, this is a problem that could be fixed with the stroke of a pen, this electoral system that tells you to vote against what you’re afraid of and not for what you believe. And, you know, what we’ve seen over the years, this strategy has a track record: This politics of fear has actually delivered everything we were afraid of. All the reasons you were told you had to vote for the lesser evil—because you didn’t want the massive Wall Street bailouts, the offshoring of our jobs, the meltdown of the climate, the endless expanding wars, the attack on immigrants—all that, we’ve gotten by the droves, because we allowed ourselves to be silenced. You know, silence is not what democracy needs. Right now we have an election where even the supporters of Hillary Clinton, the majority don’t support Hillary, they just oppose Donald Trump. And the majority of Donald Trump supporters don’t support him, they just oppose Hillary. And the majority are clamoring for another independent or several independent candidates and an independent party, and feel that they are being terribly misserved and mistreated by the current politics. So to further silence our voices is exactly the wrong thing to do. And I’ll just point out, Donald Trump himself is lifted up by a movement which is very much the product of the Clintons’ policies. The lesser evil very much makes inevitable the greater evil, because people don’t come out to vote for a politician that’s throwing them under the bus. And so we see houses of—the houses of Congress, we have also seen statehouse after statehouse, flipping from red to blue over the years as the Democratic Party has become a lesser-evil party. And Donald Trump is buoyed up by the policies passed by Bill Clinton, supported by Hillary—that is, deregulation of Wall Street, which led to the disappearance of 9 million jobs, 5 million people thrown out of their homes, and by NAFTA, which exported those jobs. That’s exactly the economic oppression and stress that has led to this right-wing extremism. So you can’t get where you want to go through the lesser evil. At the end of the day, you’ve got to stand up.

But we could fix this right now simply by passing ranked choice voting, which takes the fear out of voting. If you can’t put your values into your vote, we don’t have a democracy. Ranked choice voting says you can rank your first choice first, and if your first choice doesn’t make it, is eliminated and loses, your vote is automatically reassigned to your second choice. This is used in cities across the country. My campaign actually proposed this in the Massachusetts Legislature through a progressive Democratic representative back in 2002 in the first race that I ran. I was running for governor. We proposed that bill, filed it, so that there would be no splitting of the vote. The Democrats refused to let it out of committee. And that tells you something very important: They rely on fear. They don’t want you to vote your values. They need to use the scary tactic of, “Oh, the other guy is worse.” Why is that? Because at the end of the day, they are not on your side. They need you to be afraid of them, because they are not for you. That alone speaks volumes about how far we are going to get.

In this race, I’ll just conclude saying, this is a unique moment now. We’ve never been here in history before. What we are facing, you know, is not just a question of what kind of world we want to be, but whether we will be a world at all, the way the nuclear arms race has been re-engaged, the way Hillary Clinton wants to create an air war over Syria through a no-fly zone against another nuclear-armed power—that is, Russia—the climate crisis, where the day of reckoning is coming closer and closer all the time. We can’t keep using this failed policy of silencing ourselves with this politics of fear. It’s time to forget the lesser evil, stand up and fight for the greater good like our lives depend on it, because they do.

DR. JILL STEIN: Yes, exactly. I’d say putting another Clinton in the White House is only going to make that right-wing extremism greater. We will see more of these neoliberal policies, like Wall Street deregulation, like the Trans-Pacific Partnership, which Hillary has always supported. She’s changed her tune a little bit, but Hillary has walked the walk. Look at the walk and not the talk. In fact, you know, Trump says very scary things—deporting immigrants, massive militarism and, you know, ignoring the climate. Well, Hillary, unfortunately, has a track record for doing all of those things. Hillary has supported the deportations of immigrants, opposed the refugees—women and children coming from Honduras, whose refugee crisis she was very much responsible for by giving a thumbs-up to this corporate coup in Honduras that has created the violence from which those refugees are fleeing. She basically said, “No, bar the gates, send them back.” You know, so we see these draconian things that Donald Trump is talking about, we actually see Hillary Clinton doing.

And it’s not only the militarism that Trump talks about, it’s Hillary’s massive record of militarism: the rush into Libya, which was really—you know, she was the prime mover behind that campaign, which the military advisers were largely against; her approval for the war in Iraq and so on; you know, her threat to bomb Iran; and, you know, she—and her demonization of Russia and China, and the pivot against China. We are rushing towards war with Hillary Clinton, who has a track record.

And on climate, you know, Trump talks terrible on climate, although in Ireland, I believe it is, he does believe in climate change: He’s trying to build a wall to protect one of his luxury golf courses in Ireland, because he’s worried about sea level rise from climate change, according to the papers that he’s filed for that permit. And on climate, Hillary Clinton established an office to promote fracking around the world, while secretary of state.

DR. JILL STEIN: Neither party of the evils will do it for us.

AMY GOODMAN: We just have 30 seconds, but your unsolicited advice, unsolicited by Bernie Sanders, for what he should demand when he meets with President Obama today, and then your advice to him when he comes outside?

DR. JILL STEIN: You know, I don’t think President Obama is going to change his tune because of something that Bernie Sanders says to him. I think what’s really important—you know, in the words of Frederick Douglass, “Power concedes nothing without a demand. It never has, and it never will.” This is why third parties are effective, whether they’re in power or whether they are simply pushing. Otherwise, there is no counterweight of the power of corporations, which have basically taken over the two major corporate political parties. So, I think it’s very important for Bernie to—you know, to have a teachable moment here and to take heed of his experience of the last many months, and for him to actually stand up and do what the world needs for him to do and what the world needs for this movement to do. And if Bernie is not able to overcome his experience of many decades as a loyal and faithful Democrat, I really understand that. But I think for those of us who are living in today and who are seeing what tomorrow looks like, it’s very important for us to move ahead and take back the America and the world that works for all of us, based on putting people, planet and peace over profit.

AMY GOODMAN: Jill Stein, we want to thank you for being with us, 2016 presidential candidate for the Green Party.

This is Democracy Now! When we come back, a debate on the executive order just issued by New York Governor Cuomo on BDS. Stay with us.

Debate: Is Cuomo’s Crackdown on BDS Unconstitutional McCarthyism or a Stand Against Anti-Semitism?

NEXTDebate: Is Cuomo’s Crackdown on BDS Unconstitutional McCarthyism or a Stand Against Anti-Semitism? 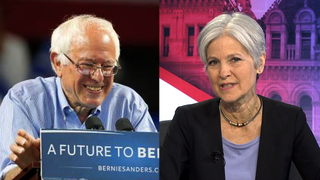