The controversy at Yale comes as Georgetown University struggles to come to terms with its past involvement in the slave trade. In 1838, Georgetown sold 272 enslaved African Americans belonging to prominent Jesuit priests to help secure the future of the Catholic institution. The school has recently established a working group to determine what, if anything, is owed to the descendants of these slaves. We speak to Craig Steven Wilder, author of the book “Ebony & Ivy: Race, Slavery, and the Troubled History of America’s Universities.”

AMY GOODMAN: Before we end, the controversy at Yale comes as Georgetown University struggles to come to terms with its past involvement with the slave trade. In 1838, Georgetown sold 272 enslaved Africans belonging to prominent Jesuit priests to help secure the future of the Catholic institutions. The school recently established a working group to determine what, if anything, is owed to descendants of these slaves. Craig Wilder, what is your response?

CRAIG STEVEN WILDER: You know, I think that Georgetown has been quite an interesting case. Georgetown is actually one of the few—to give it some credit, one of the few historically white universities that’s dealt with this issue as something more than a public relations problem. They’ve actually taken it as a challenge to their Catholic identity and to the Jesuit identity of the institution.

AMY GOODMAN: When they were going bankrupt.

CRAIG STEVEN WILDER: Well, you know, they were in financial trouble. A lot of Catholic institutions were. But the Catholic Church was also in a period of dramatic expansion during that period. And so, I don’t want to leave the story at “slavery saved Georgetown.” It did. The sale rescued Georgetown. But it also allowed the Catholic Church to expand out of Maryland into the Northeast. The first Catholic college in New England, Holy Cross, is established by one of the Jesuits who sold the 272 people in 1838. The university I went to here in New York, Fordham, is actually established by a bishop who paid for his college tuition in Maryland by becoming the overseer of the slaves in the college garden. And it expands westward to St. Louis and the first—the first American university on the west of the Mississippi River, St. Louis University, is established by slaveholding Jesuits from Maryland.

AMY GOODMAN: We’re going to have to leave it there. Corey Menafee, your final thoughts? We have 10 seconds.

COREY MENAFEE: Well, I just hope people can learn from what I went through. My actions weren’t—what I did wasn’t a good thing as far as how I went about doing it. However, it brought about change.

AMY GOODMAN: We’re going to have to leave it there. Corey Menafee, Patricia Kane and Craig Wilder, thanks so much for being with us. And a fond farewell to Juan Carlos Dávila and Pedro Rodríguez. 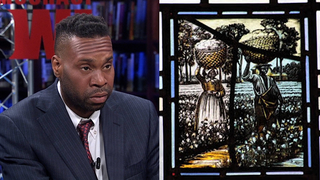