Medea Benjamin: Why Is Government Downplaying Saudi-9/11 Docs After Keeping Them Secret for Years?

The Obama administration has finally declassified 28 pages from the September 11 report detailing possible ties between the Saudi government and the 9/11 attacks. The report states: “Prior to September 11th, the FBI apparently did not focus investigative resources on [redacted text] Saudi nationals in the United States due to Saudi Arabia’s status as an American 'ally.'” Fifteen of the 19 men who hijacked planes on 9/11 were from Saudi Arabia. Speaking on Friday, White House Press Secretary Josh Earnest downplayed the importance of the declassified documents. The declassified documents raise new questions about the role of Fahad al-Thumairy, a Saudi consular official based in the Los Angeles area. Al-Thumairy personally helped two of the hijackers after they arrived in Los Angeles in early 2000. The document also reveals details about an incident in 1999 when a flight from Phoenix to Washington, D.C., was forced to make an emergency landing after a Saudi man attempted to enter the cockpit twice. We speak to CodePink co-founder Medea Benjamin. Her forthcoming book is “Kingdom of the Unjust: Behind the U.S.-Saudi Connection.”

AMY GOODMAN: We move from Turkey to Saudi Arabia. This is Democracy Now!, democracynow.org, The War and Peace Report. I’m Amy Goodman. The Obama administration has finally declassified 28 pages from the September 11th report detailing possible ties between the Saudi government and the 9/11 attacks. The report states, quote, “Prior to September 11th, the FBI apparently did not focus investigative resources on [redacted text] Saudi nationals in the United States due to Saudi Arabia’s status as an American 'ally.'” Fifteen of the 19 men who hijacked planes on 9/11 were from Saudi Arabia. Speaking Friday, White House Press Secretary Josh Earnest downplayed the importance of the declassified document.

AMY GOODMAN: The declassified document raises new questions about the role of Fahad al-Thumairy, a Saudi consular official based in the Los Angeles area. Al-Thumairy personally helped two of the hijackers after they arrived in Los Angeles in early 2000. The document also reveals details about an incident in 1999 when a flight from Phoenix to Washington, D.C., was forced to make an emergency landing after a Saudi man attempted to enter the cockpit twice. Despite these findings, Josh Earnest said the report found no links between the Saudis and al-Qaeda.

PRESS SECRETARY JOSH EARNEST: This information, even as it’s now publicly available, does not change the assessment of the U.S. government that there’s no evidence that the Saudi government, as an institution, or senior Saudi officials individually funded al-Qaeda.

AMY GOODMAN: We are now joined by Medea Benjamin. She’s co-founder of CodePink. Her new book is called Kingdom of the Unjust: Behind the U.S.-Saudi Connection. It will be out in August.

AMY GOODMAN: I saw you outside protesting, quite a major scene there with police on horseback pushing you women of CodePink forward with their horses as you were singing for peace. But we’ll talk about that in a minute. Let’s talk about Saudi Arabia first. This is hardly getting any attention, clearly deliberately by the Obama administration, because it came out on Friday, when, at the time—this is before so much took place on Friday—but at the time, it was believed Donald Trump was going to be announcing his running mate, Governor Pence. Talk about the 28 pages that you have been demanding, among many people, including the former governor and senator from Florida, Bob Graham, released. It finally was.

MEDEA BENJAMIN: Well, you’re right to put it in the context of they tried to hide this as much as they could. I mean, a Friday afternoon, when Congress is going on its summer vacation, when the conventions are starting. They really wanted to bury this.

What is in the 28 pages? Well, I think the way the administration and the Saudi officials tried to downplay it, you have to question: Well, then why they were hiding it for 14 years? What we see in the 28 pages is 10 different Saudi individuals who were named and details about their connections to the Saudi government and their connections to helping the hijackers. This is mostly, Amy, the ones that were living in San Diego. Two-thirds of the hijackers, though, were living in Florida. We don’t have any information that’s released about them. And there’s, according to Bob Graham, 8,000 pages of documents that he and others are still trying to get released.

You talked about the dry run that was in 1999. It was actually two Saudis that were on their way to a party at the Saudi Embassy, with tickets paid for by the Saudi government, that tried to get into the cockpit twice, with an emergency landing, and then the FBI decided not to further investigate it. You mentioned Thumairy. Thumairy was allowed to go back to Saudi Arabia. When he was interviewed again in Riyadh in 2004, he denied that he had any contact with the hijackers, despite being presented with phone records. There are so many connections between individuals related to the Saudi government and these hijackers that it’s hard to even see why the U.S. government, whether it’s under the Bush administration or the Obama administration, continues to consider Saudi Arabia an ally. Of course, if you look deeper into it, you see things like $97 billion worth of weapon sales, so there’s a lot of money involved in this alliance.

MEDEA BENJAMIN: The U.S.-Saudi relationship right now, I would say, is not based on oil, because only 12 percent of the oil from the United States comes from Saudi Arabia. It’s based on weapon sales. It’s the largest purchaser, by far, of U.S. weapons—$97 billion worth now in the works; under the Obama administration, the largest sales of weapons to any country ever in the history of the United States going to Saudi Arabia, Saudi Arabia using those weapons to commit war crimes in Yemen, with not only U.S. weapons, but the logistical support of the United States. And Saudi Arabia, let’s remember, is the country that is spreading extremism throughout the world. It is a country that is based on the most intolerant form of Islam, Wahhabism, and it has been using billions of dollars of petrodollars to spread that extremism all over the world. So, it is quite extraordinary.

AMY GOODMAN: I want to turn to the Saudi foreign minister, Adel al-Jubeir, speaking after the 28 pages were released on Friday.

ADEL AL-JUBEIR: The CIA director, the director of national intelligence came out and said that there is no involvement of the Saudi government, of Saudi officials, in the events of 9/11. The Senate Intelligence Committee did its own investigation, came to the same conclusion. And so, the matter is now finished.

AMY GOODMAN: There you have the Saudi foreign minister. Your response to what he’s saying, that this proves that there isn’t a connection?

MEDEA BENJAMIN: I think it’s insane. I think the Saudi government employs eight different lobby groups in the United States. The foreign minister came to the U.S. when this was being released. They had a full-court press out to get the mainstream press to downplay this. I think the only thing I saw was The New York Times had actually said it was a far more substantial document than the Saudi and the American officials tried to indicate. But for most of the press, they either didn’t even cover this, or they covered it the way the U.S. government and the Saudi government wanted it to be covered, not the way the 9/11 families or people like Senator Graham himself wanted it to.

AMY GOODMAN: Let me ask you this. You’re here protesting at the Republican convention. We’ll talk about that in a minute. I saw you last night out on the streets. But it’s Donald Trump who has called out the Saudi regime. Talk about Donald Trump versus Hillary Clinton on this issue, not to mention the Libertarians and Green Party candidate, as well.

MEDEA BENJAMIN: Donald Trump really wants the Saudis to just pay more. I mean, Donald Trump would be happy with the relationship with Saudi Arabia as long as the Saudis paid more for their own—what he calls their defense. He wants the Saudis to get more involved in the Middle East conflicts. So, yes, he has said some things about wondering if they really are friends of the United States. But in the end, I don’t think we should be under any illusion that Donald Trump is going to cut off the Saudis. He just wants a better deal. In fact, Donald Trump has many dealings himself personally with the Saudi government and Saudi princes.

MEDEA BENJAMIN: Hillary Clinton has an even worse record. In fact, her foundation has received somewhere between $10 [million] and $25 million from the Saudi government. She has had very intimate dealings with the Saudis, calls them the great ally of the United States. And it was when she was secretary of state that the highest amount of weapon sales was approved to the Saudi government.

AMY GOODMAN: And why you’re here in Cleveland, Medea Benjamin?

MEDEA BENJAMIN: I’m here because I’m protesting both Donald Trump, the RNC, and I’ll be protesting Hillary Clinton at the DNC. I think we have a terrible choice of presidential candidates, and we have a system that is so corrupt. And one little part of that is this continued alliance with a repressive Saudi regime that’s repressing its own people, that is spreading extremism around the world. And we have to question: Why in the world is our government and our two political parties continuing this alliance?

AMY GOODMAN: The approach that the police took to you, all dressed up as pink Lady Liberties, the CodePink women, with signs that talked about immigration rights and ending endless war, and then moving in on you on horseback last night?

MEDEA BENJAMIN: Quite extraordinary. I mean, we very consciously tried to look very welcoming and warm. In fact, we were welcoming the people who were coming to the convention, but we were saying, “Let’s stop the hatred. Let’s open our arms to people who are fleeing oppression, whether it’s from Syria or people fleeing from Latin America.” And the response of the police was overwhelming and ridiculous.

AMY GOODMAN: Well, we will continue to follow the protests, of course, on the ground this week. Medea Benjamin, thanks for being with us, co-founder of CodePink. Her latest book, coming out in August, Kingdom of the Unjust: Behind the U.S.-Saudi Connection.

When we come back, FBI knocking on the door of people they perceive to be would-be protesters here in Cleveland. Then Rashad Robinson of Color of Change on the corporations that won’t be supporting the Republicans. Stay with us. 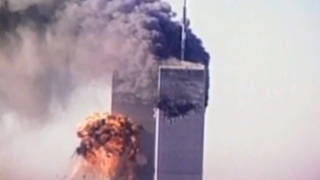