We go to Baltimore to get reaction to the acquittal of a third police officer on all charges for his role in the arrest of Freddie Gray, who died of spinal injuries last year after he was arrested and transported in a police van. Lt. Brian Rice, the highest-ranking officer on the scene, faced charges of involuntary manslaughter, misconduct in office and reckless endangerment. Judge Barry Williams had dropped a charge of second-degree assault at the trial’s midpoint. We speak with Sheryl Wood, a former federal prosecutor and legal analyst; and Kwame Rose, a Baltimore activist and producer with The Real News Network. He was convicted for failing to obey an order from law enforcement while protesting the December mistrial of Officer William Porter. Rose’s appeal begins today.

AMY GOODMAN: This is Democracy Now!, democracynow.org, “Breaking with Convention: War, Peace and the Presidency.” I’m Amy Goodman. We’re in Cleveland at the Republican National Convention, but we’re going to Baltimore, where a third police officer was acquitted on all charges for his role in the arrest of Freddie Gray, who died of spinal injuries last year after he was arrested and transported in a police van. Lieutenant Brian Rice, the highest-ranking officer on the scene, faced charges of involuntary manslaughter, misconduct in office and reckless endangerment. Judge Barry Williams had dropped a charge of second-degree assault at the trial’s midpoint. Baltimore defense attorney Warren Brown responded to the verdict.

WARREN BROWN: You know, the state at this point is not just 0 for four. The state is 0 for close to 24, because when you add up all the charges in the various indictments, that’s how many counts that we’re talking about. And so, at some point in time, you would have to think that the evidence is just not going to support any further prosecutions of these police officers.

AMY GOODMAN: Freddie Gray died in April 2015 from a spinal injury sustained while being transported in the back of a police van. Gray’s family and attorney say his voice box was crushed and his spine was, quote, “80 percent severed at his neck.”

Well, Lieutenant Rice was one of six officers charged in Gray’s death and the fourth to go on trial. Officers Caesar Goodson and Edward Nero were acquitted of all counts in two earlier trials. Officer William Porter was the first officer to go to trial, charged with involuntary manslaughter, second-degree assault, reckless endangerment and misconduct in office. In December, Judge Williams declared a mistrial in Porter’s case after jurors were unable to reach a verdict on any of the charges after three days of deliberation.

For more, we’re joined right now by two guests. Sheryl Wood is a former federal prosecutor and legal analyst. And Kwame Rose is a Baltimore activist and producer with The Real News Network. He was convicted for failing to obey an order from law enforcement while protesting the December mistrial of officer William Porter. Kwame Rose’s appeal begins today.

But I want to start here in Cleveland. Last night, the Republican National Convention, one of the opening speakers was Milwaukee County Sheriff David Clarke, who spoke about the recent police killings of African-American men, as well as the verdict in the Lieutenant Brian Rice trial.

SHERIFF DAVID CLARKE: There is some good news out of Baltimore, Maryland, as Lieutenant Brian Rice was acquitted on all charges. … What we witnessed in Ferguson and Baltimore and Baton Rouge was a collapse of the social order. So many of the actions of the Occupy movement and Black Lives Matter transcends peaceful protest and violates the code of conduct we rely on. I call it anarchy.

AMY GOODMAN: So, that was at last night’s convention. Today, we’re joined by Sheryl Wood and Kwame Rose.

We welcome you both to Democracy Now! Sheryl Wood, let’s begin with you. Your response to the verdict and also to what Sheriff David Clarke said at the Republican convention here in Cleveland?

SHERYL WOOD: Well, first, with regard to the verdict, I was not surprised. I did predict an acquittal of all charges. And that’s only because the prosecution has not been able to prove their case beyond a reasonable doubt. The judge has really laid out, really without any emotion, just looking at the elements of each of the crimes that these officers have been charged with, and showing how the state has not been able to present evidence, that they met that. They’ve—just violating a general order not to wear a seat belt is not a criminal act, so they have to show something more about their conduct. They haven’t been able to do that.

AMY GOODMAN: And, Kwame Rose, I mean, interestingly, your trial, the verdict at the same time as the case of Lieutenant Brian Rice—he was acquitted. You, on the other hand, were convicted of failing to obey an order from law enforcement during a protest last year around the case of Freddie Gray, the first officer charged, William Porter, when a jury failed to convict him. Your thoughts on the verdict and also your own case?

KWAME ROSE: Well, you know, my thoughts on the verdict, it’s completely evident at this point that Marilyn Mosby charged these six officers only to stop protest. And what powers that be in Baltimore City feared was unrest that will continue to happen if they did not charge. So this was a crowd control. That’s what this measure was. So, I’m not surprised that Officer Rice was let off. I won’t be surprised if not one officer is convicted of one count, because it’s not illegal to kill black people in America. And that’s what we’re trying to change, and that’s what people are advocating and fighting for.

AMY GOODMAN: Sheryl Wood, you’re a former federal prosecutor. What about what Kwame Rose just said? I mean, when Marilyn Mosby, the state’s attorney, came out and said she was charging six officers, I think it rocked the nation, as she reassured people who had taken to the streets. She said that justice would be done, that people, especially young people, should have faith. And she said something like, “Our time has come,” she, herself, a young prosecutor. What do you think of how these cases have been conducted, one acquittal after another?

SHERYL WOOD: Well, I think that I agree with Kwame that the charges were rushed, for whatever reason. I believe that 13 days from the day that Mr. Gray died is insufficient time for a prosecutor to investigate the case and decide what charges to bring, and decide really who to give immunity to, who not to charge, because police cases are very difficult to prosecute. They are. I mean, we’ve learned that across the country. So you want to bring forth the best case. I don’t think it’s good for our community to bring charges where you’re not certain you can get a conviction—I mean, not 100 percent certain, but not certain enough to get a conviction. And now we have to go through acquittal after acquittal. That’s no good for our society and our community, either. I think people are looking for someone to blame. A lot of people are blaming the judge for what has happened, as opposed to looking at the fact that the charges were brought quickly, that the evidence has been insufficient, and the judge can’t just find them guilty because of what we’re concerned about within our society. He has to be able to hear the evidence to find them guilty. I agree with the verdicts that the judge has rendered, but I certainly am concerned with the process and the lack of time to investigate. There could have been a speech made on May 1st saying, “I’m going to fully investigate these cases, and, if appropriate, I’m going to bring charges.” And that would have given her some time and her team some time to really put together cases where they might be able to get a conviction.

AMY GOODMAN: Kwame Rose, can you describe what you did back in December, what your protest was about, and why ultimately you were convicted yesterday and have to pay a $500 fine, though you have appealed this case? And that case opens—that trial opens today.

KWAME ROSE: Yeah, without going into too much detail, I will say that in December, I, along with several other individuals, had gathered during the trial of William Porter. And I did nothing more than exercise my First Amendment right to gather in peaceful protest and demonstration and assembly outside of the courthouse, to let it be known that we were continuing to gather peacefully to demand that justice, and let it be known to the law enforcement, to Maryland State’s Attorney Marilyn Mosby, let them know that the citizens of Baltimore want justice, and we are demanding it peacefully, by peacefully demonstrating and exercising our constitutional rights.

AMY GOODMAN: How do you think this country can move forward? I’m speaking to you from Cleveland, where Tamir Rice was killed by police officers just two years ago. The officers in that case of the 12-year-old boy who had a toy gun in a park were not charged.

KWAME ROSE: And, you know, I think that this country will move forward only if we, as individuals—right? We see that it won’t come inside of a courtroom. Justice won’t be served there. But justice will only become a reality when we, as individuals, stop making excuses for problems that are hundreds of years old, right? We see with Sheriff Clarke’s comments, as he’s being used as a puppet to further hate of black bodies and to perpetuate this myth that people are—Black Lives Matter is out to kill police officers. We have to admit that there’s a problem. Philando Castile was a law-abiding citizen who had a permit to carry a weapon, and he was killed—

KWAME ROSE: —by law enforcement because he was a black man. So, I think that we have to have conversations as individuals.

AMY GOODMAN: Kwame Rose and former federal prosecutor Sheryl Wood, I want to thank you for being with us. That does it for our broadcast. Special thanks to the Denver Open Media crew, to Denis Moynihan, Sam Alcoff, Mike Burke, Carla Wills, Laura Gottesdiener. I’m Amy Goodman, from Cleveland, Ohio. Thanks for joining us. 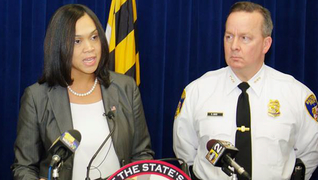