The Republican Party has officially adopted Donald Trump’s proposal to build a wall along the U.S.-Mexico border in its official party platform. The new platform states: “The border wall must cover the entirety of the southern border and must be sufficient to stop both vehicular and pedestrian traffic.” In response, immigrant rights activists have decided to build a wall of their own here in Cleveland around the Republican National Convention. Mijente, the Ruckus Society, Iraq Veterans Against the War, The Other 98% and the Working Families Party are working together to construct the wall.

AMY GOODMAN: We’re also joined by Marisa Franco. Marisa Franco is director of Mijente, which has helped organize the Wall Off Trump protest here at the Republican National Convention. She recently wrote a piece in The Nation headlined “The Deportation Machine Obama Built for President Trump.” Talk about your action today.

MARISA FRANCO: Hi, Amy. Thanks for having me on.

AMY GOODMAN: It’s good to have you.

MARISA FRANCO: So, you know, Donald Trump has campaigned all across the country pledging to build this wall. So, here at his coronation as the nominee for the Republican Party, Mijente, along with Iraq Veterans Against the War, Ruckus Society and The Other 98, many other organizations, decided to bring him his wall and build it here for him. But instead of building a wall that divides our communities, we wanted to build a wall that protects our communities from the hatred, racism and xenophobia of his campaign.

MARISA FRANCO: It’s here locally in Cleveland. There’s folks from Cleveland, as well as folks from across the country, that have come to help build this wall. It’s people-powered, through and through. It’s been painted. People will be descending upon the city today. And banners of 25 to 50 feet, ponchos—it’s a creative action, I think, meant to really send a clear message.

AMY GOODMAN: Will you be going to the Democratic convention, as well?

MARISA FRANCO: Yeah, we will be going to the Democratic convention. Right now, we wanted to really highlight the threat of Donald Trump and the policies that he’s spreading, but we’re also very clear that this is not a—this is not an endorsement of Senator Clinton.

AMY GOODMAN: You—clearly, with this headline that is in The Nation, “The Deportation Machine Obama Built for President Trump,” you’re indicting both parties here.

MARISA FRANCO: Absolutely, absolutely, because as much as, you know, Donald Trump is talking and the Republican Party is promising particular policies, in fact, Democrats have implemented them. Fact of the matter is that President Obama has deported more people than any other president in this country. And the question is: Are you going to leave that deportation machine there for Donald Trump to pick it up? And Hillary Clinton, if she becomes the president, will she continue the legacy of President Obama on his record of deportations?

AMY GOODMAN: I wanted to get both your comments on one of the people who was on the floor of the convention last night. Democracy Now!’s Deena Guzder asked Maricopa County Sheriff Joe Arpaio why he supports Donald Trump, in particular, his immigration policy.

SHERIFF JOE ARPAIO: Illegal immigration policy. I supported him the day he decided to run. I think he’s a great guy. New York is very proud of him. He carried New York. And the country is proud of him, the Republicans. And he’ll make a great president.

DEENA GUZDER: What, in particular, about his immigration policy do you support?

SHERIFF JOE ARPAIO: Well, I support the majority of his policy. We have to do something about the border. Most of the illegals and drug traffic comes from Mexico. I’m concerned about the drug traffic. When he says, “Put up the wall,” I like the wall to keep the drugs out of our country. That’s the most important thing that’s going on, not the illegal immigration. That’s important, but what about all the drugs coming in, the heroin and everything else? Because it’s a violation of the law to come into this country illegally, you must secure your borders. We have terrorism now. We have cops being killed. I’m not blaming the Hispanics for that, because I’ve had—I’ve had one of—a white guy shoot my deputy. So, it—but it’s important to do that. I think he knows that the country is frustrated. If it wasn’t for him, nobody would be talking about illegal immigration. Nobody wanted to talk about it. But since he brought it up, talked about the wall, now all the politicians are talking about it.

DEENA GUZDER: And he’s also called for a temporary ban on all Muslim immigration. Do you think that’s a good idea?

DEENA GUZDER: Do you support Mike Pence, given his position on immigration? I think at one point he had a touchback amnesty-type position.

SHERIFF JOE ARPAIO: Oh, well, you know what? I’m going to tell you something. Donald Trump will be a very active president. So I don’t—I’m not concerned about other people. But I know he will listen to him. He will listen to the people that work for him, or they’re associated. But still, he’ll make the final decision. That’s what he will do.

MARISA FRANCO: Yes, unfortunately, I do. Sheriff Arpaio is one of the most terrible violators of civil rights of our time. I think that it’s telling that he’s endorsing Donald Trump. He might be auditioning for a reality show, hopefully when he’s retiring soon or he gets voted out. We did a protest locally in Phoenix when Donald Trump came, and shut down the highway leading up to the Trump rally. But Sheriff Arpaio has—you know, he represents the same politic that Donald Trump does, and that is a politic that sends our country backwards. It’s to send us to the back of the bus, back into the closet and back into the shadows. And it’s tried and true. They’re peas in a pod, Sheriff Arpaio and Donald Trump.

AMY GOODMAN: You know, one of the reasons we’re not broadcasting directly in the convention hall, as the corporate media is, is because you need a whole slew of credentials to get inside, which means so many of the people who come to these conventions, who don’t get credentialed but are doing things outside, the uninvited guests, we want to be able to talk to them, as well, like you. You were not inside the convention on Monday night, when the parents spoke of those who died at the hands of undocumented immigrants. But this report that talks about really who commits murder in this country.

MARISA FRANCO: Right. When I think of that, I think of Brisenia Flores. I think of Anastasio Hernández Rojas. Brisenia was killed by anti-immigrant vigilantes. She was shot, killed. She was six years old. Anastasio was—

AMY GOODMAN: Where was she?

MARISA FRANCO: In Arizona. She was a six-year-old child, a few years ago killed. Anastasio Hernández Rojas—it’s a very well-known case—he was killed in cold blood by Border Patrol. I think of—

AMY GOODMAN: That was actually videotaped—

MARISA FRANCO: It was videotaped, and nothing’s been done.

AMY GOODMAN: —and cellphone-videoed by many people.

MARISA FRANCO: That’s right. But I also think of South Asian people, of Muslim people, of African people, Caribbean people, Asian people, immigrants in this country who have been assaulted, who have been killed, who have been exploited. We could sit here and counter those statistics, but the fact is that those are tired, stale, old right-wing talking points, and to counter them with the argument that immigrants commit less crime is actually not—it hasn’t gotten us anywhere. The fact of the matter is that there are people in this country who feel that, because immigrants—immigrants who do not look like them, regardless if they’re bad or good, do not have a right to be able to pursue a better life, do not have a right to be able to live, work and love where and how they choose. And so, I think that the immigrant rights movement has contorted—we’ve contorted ourselves to be able to try to fit these paradigms of good-versus-bad immigrant, and it hasn’t gotten us anywhere.

AMY GOODMAN: I want to turn—

MARISA FRANCO: So I don’t think we need to respond to those—to those stale arguments.

AMY GOODMAN: I want to turn to a person on the streets Monday. Hundreds protested outside the RNC at a Stop Trump rally. Attendees included members of the Minnesota Immigrant Rights Action Committee.

ADRIANA CERRILLO: My name is Adriana Cerrillo, and I’m with MIRAC, which is Minnesota Immigrant Rights Action Committee. And the name says it all. We work for the rights of immigrants in this country. And the reason that I’m here is to stop the rhetoric and hateful, divisive message of Donald Trump.

I was brought here when I was 15 years old. I’m from a city called Reynosa, Tamaulipas, Mexico, right on the border with McAllen, Texas. And it was not my choice. My mother decided to come across the border and to bring the family here. So I lived in this country undocumented, and I actually couldn’t go to college because I didn’t have the proper documentation. You know, back in those years, we didn’t have the movement of being undocumented and unafraid. So, that’s what really makes me be more engaged and fight for our youth.

AMY GOODMAN: Marisa Franco, can you respond, as we wrap up?

MARISA FRANCO: For radical Latinx people who Donald Trump has targeted part of our community, it’s not only important for us to be here resisting his policies because of what he’s done to our community and what he threatens. What he threatens are borders across all of the country. It is not just a border wall he proposes. He is threatening to divide us. And this goes beyond an immigration issue. It goes beyond Latinx people. This is a threat to a lot of different folks in our communities. And so, we hope that this action really emboldens and sparks imagination to resist Trump and wall him off.

AMY GOODMAN: And we will certainly be there covering it. Marisa Franco, director of Mijente, which has helped organize the Wall Off Trump protests that are taking place today, as they build a wall outside the convention. We’ll link to your piece, “The Deportation Machine Obama Built for President Trump.”

That does it for our broadcast. By the way, I’ll be doing a report back from the conventions on Friday the 29th in Provincetown, Massachusetts, Town Hall, and on Saturday, July 30th, on Martha’s Vineyard at the Old Whaling Church. 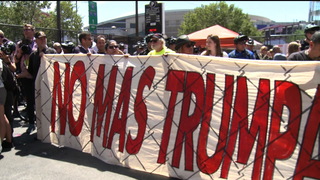