As delegates and media workers filed into the Quicken Loans Arena on Thursday ahead of Donald Trump’s big night, a group of young Cleveland activists gathered near the gates of the RNC to protest Republican Party priorities they say have decimated their city—economic policies that left thousands unemployed and blighted neighborhoods, racial discrimination that’s made Cleveland one of the most segregated cities in the U.S., and a police force that infamously shot dead African American Tamir Rice within two seconds of pulling up next to the boy as he held an airsoft BB gun. We spoke with protesters as they held aloft posters that featured tweets decrying these policies.

AMY GOODMAN: This is Democracy Now!, democracynow.org, “Breaking with Convention: War, Peace and the Presidency.” I’m Amy Goodman. The protesters here held aloft posters. We’re going to turn right now to actions that were taking place in the streets. We went to the Public Square, where a group of Cleveland residents held posters featuring tweets decrying what is taking place. as delegates and media workers filed into the Quicken Loans Arena. This was the big night of Donald Trump. These young Cleveland activists gathered at the Public Square, talking about their concerns about their city and how it’s been decimated, economic policies that have left thousands unemployed and blighted neighborhoods, racial discrimination—Cleveland one of the most segregated cities in the U.S., and a police force that is known around the country as the one two years ago where two officers came to a local recreational park, and one shot dead a 12-year-old boy named Tamir Rice within two seconds of pulling up, as he played with his toy gun. The protesters held aloft their posters that featured tweets decrying these policies.

SAMIRA MALONE: Hi. So, our movement is #CLEoverRNC. My first name Samira, last name Malone. And these are Twitter discussions that we’ve been having all week. The centralized themes have been the everyday things at the RNC. My tweet, I said, “How do you 'Make America Work' when you’re lining your pockets with money from privately owned prisons instead of creating jobs?” That’s the contradiction.

ALICE RAGLAND: Hi. My name is Alice Ragland. And the sign says, “50 million dollars spent on the renovation of a park but the school system is failing.” So, basically, with that—I went to Cleveland public schools. And even before the whole school choice thing came, it was already failing. We had an extremely poor school. We had 20-year-old textbooks. And I’ll tell you, it will get—it got absolutely no better when the charter schools moved in. It got no better. It actually got a little bit worse. So I keep hearing Republicans talking about school choice like that’s our solution, but the school system is still failing, whether it’s privately owned or publicly owned. They don’t care about black students. They don’t care about black students at all, it seems to me.

AMY GOODMAN: Can you read me yours?

PROTESTER 1: Sure. “I do not want the media to paint Cleveland out to be this upbeat lively city when there are so many injustices going on here.”

SHAMARA ARKY: I’m Shamara Arky [phon]. And my sign talks about Tamir Rice. And so, it’s not about any candidate. I’m standing here holding this as a mother of two black sons. My sons are six and nine. And Tamir was 12. I’m standing here for all the mothers all over the country, all over the world, that have lost their children to state violence, that have lost their children to police brutality. It is time for mothers to stand up and put our lives on the line for our children. This is what we are doing now.

PROTESTER 3: Sure. “Grown white men are openly carrying assault rifles in a city where one black child with a toy gun was killed by the police.” Tamir Rice was 12 years old. He had a toy gun. They didn’t wait. They shot him. They killed him. But you have grown white men waving assault weapons all over the place.

PROTESTER 4: So, “The most segregated city in the whole country is still affected by redlining and gentrification.”

TATIANA ATKINSON: My name is Tatiana Atkinson, and I live in South Euclid, so a suburb of Cleveland. This is East Cleveland. We asked one of our friends just to take pictures of her neighborhood to show off the Cleveland that they’re not shown during the RNC. And she went around and took a whole bunch of pictures that came out amazing. So just this is the potholes and the trash that like fill the city that $50 million came into.

JENNIFER LONGSTREET: My name is Jennifer Longstreet. I’m from Cleveland, Ohio. Our point with the whole #CLEoverRNC issue is the fact that all these accommodations were made for this event, for the Republican National Convention, yet our city—the parts that they are not showing are falling apart. We have potholes the size of minivans. The inner city is falling apart. We have boarded-up houses. We have abandoned houses on every single corner, every—especially in the predominantly black neighborhoods. But no one’s addressing. No one’s doing anything about it. But we spend millions and millions so the Republicans can come here for their convention, but we can’t do anything about the issues that mean something to us as Clevelanders. This is our city.

AMY GOODMAN: Cleveland residents who formed the group #CLEoverRNC. This is Democracy Now!, democracynow.org, The War and Peace Report. This and next week we are “Breaking with Convention: War, Peace and the Presidency,” special two-hour expanded broadcasts. We’ll be back in a minute.

How Can This Be Happening in America? International Journalists Reflect on Rise of Donald Trump

NEXTHow Can This Be Happening in America? International Journalists Reflect on Rise of Donald Trump 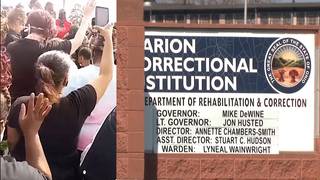