How Can This Be Happening in America? International Journalists Reflect on Rise of Donald Trump

On Wednesday, Democracy Now!’s Deena Guzder and Hany Massoud spoke to members of the international press covering the Republican National Convention to find out how other countries view Donald Trump.

AMY GOODMAN: We are “Breaking with Convention: War, Peace and the Presidency.” I’m Amy Goodman. This is our last day in Cleveland, Ohio, covering the Republican National Convention. Well, on Wednesday, Democracy Now!’s Deena Guzder and Hany Massoud spoke to members of the international press covering this RNC to find out how other countries view Donald Trump.

PATRICK GOWER: Yes, my name is Patrick Gower. I’ve traveled from New Zealand. It took 12 hours to get to L.A., another four hours to here. It was basically 24 hours’ worth of traveling to get here. And I work for an organization called Newshub, which is television, radio and digital broadcast in New Zealand.

DEENA GUZDER: What are your impressions of the Republican National Convention so far?

PATRICK GOWER: I think it’s truly insane. I think it’s crazy. I’ve never seen anything like it. I knew it would be crazy, but it’s crazier than I thought. I actually froze in there yesterday just looking at the scenes. I could—I’ve never actually seen anything like that before, people acting like they’re—that kind of worship that borders on brainwashing, in my opinion, you know? So, that scene alone blew my mind, let alone bringing in the Donald Trump factor or anything like that. The supporters alone blew my mind. And then we bring in what is actually happening with Donald Trump and the presidency and the potential for him to become the most powerful man in the world, and it’s a truly insane experience.

DEENA GUZDER: How do people in New Zealand, back home, look at Donald Trump and what’s happening back here in America?

PATRICK GOWER: It’s like a morbid fascination. People can’t look away. It’s on the news nearly every night. And people in New Zealand don’t really feel like it’s real. I don’t—I think there’s still a feeling there that people—this can’t be happening to America, this man can’t be getting so far as he is. I would say, in New Zealand, you know, a really high percentage of people would be against him becoming president of the United States. Somewhere—I’m guessing somewhere around 80 to 90 percent, maybe even more, would be concerned at Donald Trump becoming president of the United States. We look to America as our world leader. Like it or not, people look to it, and they know that. And with Donald Trump becoming president, people will be concerned about the stability of America and the stability of the world.

PHEEL WANG: My name is Pheel Wang, and we’re from Los Angeles. And the TV station that we’re representing is the Mandarin TV News. We also have news online, so I think people from all over the world, the Chinese community can watch it.

DEENA GUZDER: What has your experience been so far at the Republican National Convention? What are your impressions of it so far?

PHEEL WANG: I think we saw a lot of whites. Mostly delegates are white, white male. And we really see very few, you know, like minority groups representing at the convention.

PHEEL WANG: Well, due to what they can see from the mainstream media, of course, they think that Trump is anti-immigrant.

ALSÉNY BEN BANGOURA: My name is Alsény Ben Bangoura. I’m Washington-based journalist from Guinea and editor of AlloConakry.com, a multimedia news organization. I’m from Africa, and I know Gaddafi was toppled with the help of a French president. And then, Hillary Clinton was part of, you know, that invasion, that topple of Gaddafi. Gaddafi, everybody knows he was controversial, but he was finally part of a solution. And then the overthrow of his regime definitely contributed in the expansion of international terrorism. And Donald Trump has been saying that. He is not into nation building. He’s not going to meddle, you know, into other countries’ affairs. And I think that is a good thing.

DEENA GUZDER: Do the people of Guinea have any concerns about Donald Trump?

ALSÉNY BEN BANGOURA: Well, yes. Donald Trump is a little bit extremist. He’s extremist in his worldviews. He’s not a kind of a leader who has a clear understanding of international affairs. So that remains to be a serious concern to my readers.

NAMRATA BRAR: So, my name is Namrata Brar, and I’m based in New York, and I cover U.S. for NDTV. That’s New Delhi Television. We broadcast to about 78 countries, but primarily our audience is South Asian and Indian. Most countries, including India, have a not-so-positive perception of Donald Trump. And it’s been interesting to get that perspective of what the messaging of the Republican Party and Donald Trump is, despite, the polls would suggest, that only 14 percent of Indians support Donald Trump’s foreign policy. Obviously, he’s a very polarizing figure. And our viewers are equally divided, but most of them do tend to have a negative perception. However, there are lots of comparisons between the Indian prime minister, Narendra Modi, and Donald Trump during the rounds of late. In fact, I had a chance to speak to Newt Gingrich, who compared them, too. And he said, “Oh, they are very similar. They are both very practical guys. They are focused on the same things. And they will build a similar leadership style.” Now, whether that’s good news or bad news, or whether that’s intrinsically true, is debatable.

MOHAMMED KHATIB: My name is a Mohammed Khatib. I’m a news anchor out Sky News Arabia, and we are based in Abu Dhabi, United Arab Emirates.

DEENA GUZDER: How do the people of the United Arab Emirates perceive Donald Trump?

MOHAMMED KHATIB: Well, we broadcast to the Arab world, to the Middle East region. And the general impression is that he is a bit extremist, and he does not represent the mainstream Republicans.

DEENA GUZDER: What are some concerns the Arab world would have if Donald Trump became the next president of the United States of America?

MOHAMMED KHATIB: Some of the concerns include that he might be trigger-happy. He might be involved directly militarily in the region, and that causes some concern. Other concerns have to do with admitting immigrants to the United States and maybe putting restrictions on Muslims and the people from Muslim countries.

GREGORIO MERAZ: My name is Gregorio Meraz, and I’m a reporter, a correspondent of Televisa in Washington, D.C.

DEENA GUZDER: Which country do you report for?

GREGORIO MERAZ: Mexico, though this is a worldwide news television network in Spanish.

DEENA GUZDER: How do the people of Mexico view Donald Trump?

GREGORIO MERAZ: We believe that Mr. Trump have used very hard terms to describe Mexican workers here. We know the majority of workers are coming to work, searching for resources to feed and maintain their families, and not to commit any crimes. We know that, like in every society, there is crime in my country. But it doesn’t necessarily mean that all people is like that. So, I think we have been looking for the opportunity of talking to him to find out exactly what he was referring to, but unfortunately we have not received any answer yet.

CATHERINE LANKES: My name is Catherine Lankes. My media outlet is the Austrian Press Agency. I blog, called USA2016.at, and der Kronen Zeitung.

DEENA GUZDER: What do the people of Austria think about Donald Trump?

CATHERINE LANKES: In all honesty, mostly, they’re afraid of what’s going to happen to the States and to the world, when Donald Trump becomes president. We just can’t grasp or understand what this whole movement is about, honestly. It’s just—it feels like reality TV, but not like reality.

DEENA GUZDER: What are some of their main concerns about Donald Trump?

CATHERINE LANKES: Too extreme, too outlandish, not knowledgeable enough in the field he is an. I think this is it, mostly, which is interesting to me, because, especially in Austria, we have a, well, right, far right, that is getting strong and strong and that it is not so far from the views Donald Trump is supporting.

AZIM MIAN: My name is Azim Mian. And I’m a bureau chief of Geo TV, Jang Group of Newspapers from Pakistan. I have been here covering the United Nations and the State Department for the last 40 years.

DEENA GUZDER: What would a Donald Trump presidency mean to the people of Pakistan? And what concerns, in particular, do they have about Donald Trump?

AZIM MIAN: His statements about, you know, the Muslim world. And not only Pakistan, even the Muslim world is very apprehensive, for the simple reason the way he’s talking, and he’s trying to build a wall on the Mexican side, and he’s trying to stop all that [inaudible], whereas the reality is the crime does not have any religious identity. Criminal is a criminal, no matter whether he’s white, he is black or he is ethnic, or whatever he is. So, there should not be an identity or identification of the crime by somebody’s being Muslim name. Every society has got criminals. American jails are full of convicts, and they are not Muslims. There are criminals from other societies. So, every society has got criminals. Every society, by and large, is a peaceful one, you know. And the peaceful people should not be stigmatized. 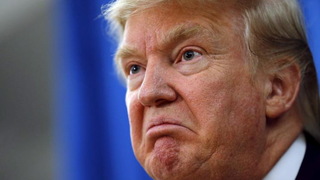 “It Might Not Be Good for America, But It’s Good for Us”: How the Media Got Rich on Trump’s Rise