The historic night marking the first nomination of a woman on a major party’s presidential ticket was not without protest. We speak to some of the hundreds of Bernie Sanders delegates who walked out of the Democratic National Convention soon after her former challenger asked to award her the nomination. “They did not listen to the people,” said Felicia Teter, a New Hampshire delegate. “They did not just ignore us, but they fought against us.”

AMY GOODMAN: The historic night was not without protest. Hundreds of Bernie Sanders delegates walked out of the convention soon after the senator asked the convention to suspend the rules and award the nomination to Hillary Clinton.

FELICIA TETER: My name is Felicia Teter. And Bernie supporters are staging a walkout of the DNC, because we were never welcome here, we were never wanted here, and no matter what we have said and what we have shown, and what the media has said and what the media has shown, and what WikiLeaks has said and what WikiLeaks has shown, still the people’s voices are not being heard, and still the people’s votes are not being counted. And so, we are going to show the Democratic Party that if they will not have us and they will not welcome us into their party, then we will leave, and they will lose to Trump. And it will not be our fault. It will be their fault, because they did not listen to the people, they did not listen to the person who came from the bottom and got to the top. They simply ignored us. They shut us down. They did not just ignore us, but they fought against us. So now we are leaving, and they will have to beat Trump by themselves.

LUIS ERIC AGUILAR: My name’s Luis Eric Aguilar, 14th Congressional District of Illinois. The theme of the DNC was to unify the party, but the delegates for Hillary get there early, reserve seats in the front rows so it shows good to the media, and then they push us to the back. That is not how you unify the party. If you want to unify the party, you include us with the Hillary delegates. But because of that, there’s not going to be unification here. They tried taking away my signs. They tried taking away these signs, the “No TPP” signs. All the homemade signs were taken away from us. But that is taking away our freedom of speech. We have a right to be there and have our speech. So, since they started taking these away, I started to write it on my arms, and so did my fellow delegates in my state, just to, you know, continue our freedom of speech.

SANDERS SUPPORTERS: [singing] This land is your land, this land is my land, from California to the New York island.

PAULA OLIVARES: My name is Paula. I’m an alternate delegate from the state of Georgia—or rather, I should say, I was. We’ve just witnessed the death of our democratic system. This election has been rigged from the very beginning. We’ve all known it. The proof came out. The superdelegates had a choice today, and they made that choice very clear: We’re not wanted in that party. I believe that we need to take our support elsewhere. It’s very sad. It’s heartbreaking to see. This is what we have built. I’m just—it’s heartbreaking. It’s really heartbreaking. Bernie will be the only one to beat Trump. Hillary won’t beat Trump. She’s a criminal. I don’t understand how people are OK with her being a criminal, proven by the FBI, with two active investigations still coming. So, I don’t know. But we’re done. The Democratic Party does not care about you. The Democratic Party does not care about America. It is a party that is strictly all about money. All that they want is make everyone good for the corporations. That’s what the TPP is all about. This is what—this is what democracy looks like.

AMY GOODMAN: Voices of Bernie Sanders’ delegates. Hundreds walked out of the Democratic National Convention last night after Hillary Clinton was formally nominated. When we come back, we’ll hear from delegates on the floor of the convention. And here in studio at PhillyCAM, Philadelphia’s public access TV station, we’ll be speaking with Clinton supporter Congressmember Luis Gutiérrez of Chicago and actor and activist Danny Glover. This is Democracy Now!, “Breaking with Convention”. We’ll be back in a minute. 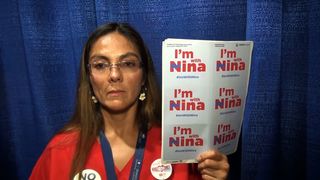