Immigrants March on the DNC, Call to Shut Down Berks Family Detention Center in Pennsylvania

Democracy Now! was in Philadelphia this week covering the Democratic National Convention, from the streets to the suites to the convention floor. We were there on Monday, when hundreds of people marched to demand a moratorium on deportations and the closure of the Berks Family Detention Center in Pennsylvania.

AMY GOODMAN: This is Democracy Now!, democracynow.org, our special edition, “Breaking with Convention: War, Peace and the Presidency.” I’m Amy Goodman. We’re in Philadelphia, Pennsylvania, covering the Democratic National Convention. We were there on Monday, when hundreds of people marched to demand a moratorium on deportations and the closure of the Berks Family Detention Center in Pennsylvania.

ERIKA ALMIRON: My name is Erika Almiron. I’m the executive director of Juntos, and we’re marching today with groups across the country, with the #Not1More network, with Mijente. And we’re here to make sure that Hillary understands that she needs to be the anti-Trump. And that means that she needs to shut down our family detention centers, like the one that’s like an hour away from here called Berks Family Detention Center, where there are children that are locked up right now. We’re here to also tell them to put a moratorium on deportations. And we’re making sure that she understands that it’s not enough to make promises, but she needs to take action.

PILAR MOLINA: Pilar Molina. Well, we’re—actually, we’re here for fighting our immigrants’ rights, basically trying to convince the Congress that we need an immigration reform right now. I’m here because my husband was detained two years ago, and he’s in the procedures of being deported.

ADELINA NICHOLLS: My name is Adelina Nicholls with the Georgia Latino—with the Georgia Latino Alliance for Human Rights. For us, it’s very important to be here because we want to put our demand of the immigrant community on a moratorium on deportations. We haven’t seen any kind of response from the Democrat Party or any other presidential candidates. It is a lot of concern, because of separation of families. Just in the state of Georgia, more than 54,000 families have been broken apart because of these deportations. We are really concerned. If the Supreme Court is blocking the implementation of the DACA and the DAPA, we are block any more deportations. We demand moratorium now.

FERNANDO LOPEZ: My name is Fernando Lopez, and I’m here because I’m a community organizer, but also I’m undocumented, I’m an immigrant. What it means to be undocumented is the same crisis that people are facing here in the U.S.: citizens that have felonies. Basically, you don’t have any rights. You don’t have any voice. You don’t have a political voice. You don’t have the right to vote. The reality is that people that are coming to this country, it’s not because they want to, you know, live the American dream. It’s because, in many times, like many instances, people are fleeing poverty, people are fleeing violence, and then coming here and face more violence and face more trauma. It’s insane. It’s a cycle that never ends. People see the immigration system and the criminal justice system as something separate. But in reality, immigration is just another branch of the criminal justice system, because Obama, when he issued his executive order, he made very clear that they were going to focus deportations on felons, not families. But felons have families. Felons are our families. And the reality is that we have a system that is constantly manufacturing felons. That’s what the system is meant to do, create felons. So, like, it just—it doesn’t make sense. It’s immoral. And I think the right thing to do, because this is going to go down in history, is for them to dismantle this organization that is ICE and to stop all deportations and to end this crisis already.

Luke Nephew. We were saying they deport us every day, but we are of this land. And our love for our people means that we don’t recognize these borders. I was at the RNC, and now I’m here at the DNC, because both candidates are failing to treat immigrants in this country with justice and with dignity. Donald Trump’s rhetoric of hate means that those who are directly impacted by the policies of immigration are much more vulnerable to the politics of hate that, again, are already separating families. So his rhetoric, Donald Trump’s rhetoric of hate, will make every single one of the people in these streets less safe, as well as everybody in this country less safe. Hillary Clinton is not better on immigration if she follows in the footsteps of President Obama, who has deported more people than any president in U.S. history. And she needs to know that it’s not just about being different from Trump. It’s about being the opposite of Trump.

MIGUEL ANDRADE: My name is Miguel Andrade. I’m an organizer and activist here in Philadelphia with Juntos. So right now we’re marching through the cities of Philadelphia. We just started out in South Philly. We’re currently in Center City, Philadelphia, like a block away from the convention center where all the Democratic convention caucuses are happening. And we’re basically out here doing a call for the potential Democratic candidate, Hillary Clinton, to use that platform that she has right now, that she’s potentially going to have, to make a push for the people in power, especially President Obama, and demand a moratorium on all deportations, that are affecting and terrorizing our communities. We’re not going to wait until November, when she’s potentially elected. We need action now, because we have been tired of waiting for the entire past administration.

ROSIE CARRASCO: Clinton, hear our voices. Visit the mothers and children at Berks Family Detention Center. Realize the urgency of their situation and close the detention center now!

LAURA YOLANDA ZUÑIGA CÁCERES: [translated] My mother was Berta Cáceres, who was an indigenous leader. She was a defender of the land. She was a defender of human rights. She was a defender of women. I live in Honduras, and I’m going to go back to my country. But I’ve also been forced to leave my country. So I understand what people who have been forced to leave feel. I understand what you’ve suffered. And so I’m standing here in solidarity with all of you and have this question always of why are people criminalized, why are they revictimized, people who have already been victims of militarism and extractive systems. 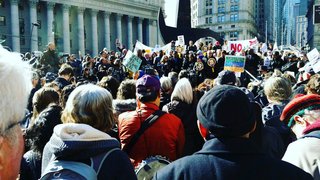