We begin with an update on the case of prominent immigrant rights advocate Ravi Ragbir, whom we interviewed Thursday on Democracy Now! right before his check-in with a deportation officer. Ragbir, originally from Trinidad, immigrated to the United States legally but has a 15-year-old criminal conviction. He’s avoided deportation since 2011 due to a series of stays that could end under President Trump. After he left our studios, Ragbir spoke at a press conference and rally, where hundreds gathered to support him before he went inside, unsure if he would come back out. He was accompanied to his check-in by his wife, his attorney, pastors and four elected officials. He emerged with mixed news. Even though he has a stay in place until 2018, he was told to return for another check-in next month. Officials also instructed Ragbir, who is married to a U.S. citizen and has a U.S.-born daughter, to prepare his travel documents, which are often the first step toward deportation.

NERMEEN SHAIKH: We begin today’s show with an update on the case of prominent immigrant rights advocate Ravi Ragbir, who we interviewed Thursday on Democracy Now! right before his check-in with a deportation officer. Ragbir, originally from Trinidad, immigrated to the U.S. legally but has a 15-year-old criminal conviction. He has avoided deportation since 2011 due to a series of stays that could end under Trump.

AMY GOODMAN: After Ravi left our studios, he spoke at a news conference and rally yesterday, where hundreds gathered to support him before he went inside, unsure if he would come back out. As Ravi Ragbir spoke, he was flanked by his wife, his attorney, pastors and at least four elected officials—the New York City Council Speaker, two New York city councilmembers, as well as a New York state senator, who would also accompany him inside.

ALINA DAS: There will be a delegation now accompanying Mr. Ragbir into 26 Federal Plaza.

AMY GOODMAN: Can you explain the Jericho walk? We see them coming, in fact, right now. This is around Foley Square and the Federal Building.

KYLE BARRON: So, the Jericho walk is an interfaith act of solidarity. It’s supposed to be seven times around the building. They start with a prayer, and they ask, you know, for immigrant justice, justice for all workers, immigrant and nonimmigrant. And it’s a prayer tearing down the walls. So that’s both like border walls, but, you know, the walls of 26 Federal Plaza, where people have to check in and face deportation every day.

AMY GOODMAN: Ravi Ragbir, who is the immigrant rights activist who went into his check-in not knowing whether he would be detained or released, is coming out in just a few minutes. Renée Feltz, maybe you can explain what’s just taken place.

RENÉE FELTZ: Well, Amy, like many immigrants facing deportation, Ravi went in with a support group that included people who had set up a text alert system. And we all just received a very good text alert. It says, “Ravi checked in, and everything is OK with him for now. Thanks for all the support.” And we believe he’s about to come out any minute now.

SUPPORTERS: We are Ravi Ragbir!

ALINA DAS: My name is Alina Das. I’m very proud to be Ravi’s friend, colleague and his lawyer. And I’m here to report, as you can see, that we are very grateful and humbled that Ravi is here with us. He was able to check out of that appointment and to be returned to his family. We know, from what we saw, from loved ones that we talked to there, that not everyone is that lucky, and that there are people there right now who are facing redetention and deportation. However, we are saddened by the news that we received in the check-in appointment, where they asked Ravi to come back in one month to check in again and to make efforts to get a travel document. We don’t know what this means. Ravi does have a stay of removal that is in place and remains in place until 2018.

RAVI RAGBIR: How do I feel about coming out? You would think that I would be happy coming back out. And I am happy to be—to be back here with my family, to sit with you, to sing with you, to talk to you. Yes, I am. But I have to go through this again.

SUPPORTER 4: It’s going to be all right.

SUPPORTER 6: We’re going to be here with you.

SUPPORTER 4: We love you, Ravi!

SUPPORTER 7: We gon’ be alright!

RAVI RAGBIR: How—how do I—how do I have this, this knife, this guillotine over my neck, and be able to function? How my wife and my friends, knowing that they asked me for a travel document, they asked me for a passport—you know, when they ask for that, it usually means one thing, right? They say, “No, we don’t—we’re not going to use anything. Everything stays the same.” But if everything stays the same, I shouldn’t be checking in next month. And I hate to be the bearer of bad news, but I’m a realist. I need to be—I need to know what could happen, and I have to prepare for what could happen. And I hope I’m wrong.

SUPPORTER 9: We’re with you, Ravi!

RAVI RAGBIR: It’s not right for anyone. And you have to remember, I have support. I have you guys. I have met you guys. I’ve been with you guys. And you all are here for me. But imagine those who do not. I am the focus right now, but the focus should be on everyone. So what are we going to do?

SUPPORTER 10: Will we be divided?

SUPPORTER 10: Will we be united?

AMY GOODMAN: Immigrant rights advocate Ravi Ragbir, speaking upon his release on Thursday, after he checked in with his deportation officer. Although his stay of deportation lasts another year, they’ve told him to come back with travel documents in one month, April 11. This is Democracy Now!, democracynow.org. Special thanks to Andre Lewis and Renée Feltz. I’m Amy Goodman, with Nermeen Shaikh. Back in a minute. 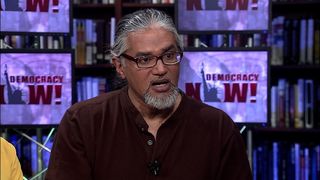