Congressman Elijah Cummings on Freddie Gray Case: I’m for Accountability, Not Against Police

As Democracy Now! broadcast from the Democratic National Convention in Philadelphia, Amy Goodman was on the floor when she spoke to Maryland Congressmember Elijah Cummings, just before word came down that all charges had been dropped against the remaining officers charged in the death of Freddie Gray. Gray died in April 2015 of spinal injuries after he was arrested and transported in a police van.

AMY GOODMAN: This is Democracy Now!, democracynow.org, Democracy Now!'s special “Breaking with Convention: War, Peace and the Presidency.” I'm Amy Goodman. We’re broadcasting from the Democratic National Convention in Philadelphia. Well, on the floor of the DNC, I bumped into Maryland Congressman Elijah Cummings. It was just before word came down that all charges had been dropped against the remaining officers charged in the death of Freddie Gray. Gray died in April of 2015 of spinal injuries after he was arrested and transported in a police van. I asked Elijah Cummings about the whole situation, the uprising in Baltimore after Freddie Gray was killed and what’s happened to the officers charged since.

REP. ELIJAH CUMMINGS: Keep in mind that in less than 2 percent of these cases are police ever charged. And then it’s very difficult to get a conviction. The first trial ended in a hung jury. That meant that there were people who believed, on that jury, that somebody should have been charged and somebody should have been found guilty. The next three trials were judge only. So, justice is—this is justice. I tell my constituents, when you demand justice, you cannot control the results. You may not get the results you want. And I think one of the things that we’ve seen is, Baltimore has been a peaceful city, even after the verdicts, because I think people have an opportunity to see justice being done.

AMY GOODMAN: Is there a federal investigation?

REP. ELIJAH CUMMINGS: Is there a what?

REP. ELIJAH CUMMINGS: No, not to my knowledge.

AMY GOODMAN: Do you think there should be?

REP. ELIJAH CUMMINGS: I don’t have an opinion on it, to be honest with you. I think the state’s attorney was elected. She’s a brilliant young lady. She’s a young lady who is—who has three or four generations of police officers, so she’s very sensitive to their needs and concerns. And she made the best judgment call she could make.

And so, now, what we have to do is be about the business of what this night is about—that is, not going into separate corners, the community and the police. We have to work together. We have to acknowledge the fact that we love our police officers. And we realize that there’s some police officers that probably do not belong on the force. When I talk to police officers in Baltimore, they tell me that they know of people that shouldn’t be on the force. The other thing that we have to acknowledge is that black men are dying, that black mothers are afraid for their sons and are afraid for their husbands and nephews. But the fact is, is that we have to talk together. You know, we have to do what we did at the convention tonight: had the police present and tell what their concerns are, but at the same time have those people who are simply asking for accountability and respect from the police to be able to voice their concerns. And hopefully we have a mutual thing going on there. The police cannot do their jobs without the cooperation of the community, and the community certainly needs the police. OK?

AMY GOODMAN: Have you ever been stopped by the police over the years?

AMY GOODMAN: So how does that stop?

AMY GOODMAN: How does that stop?

REP. ELIJAH CUMMINGS: Well, by exactly what I just said. We’ve got to have discussions back and forth. In Baltimore, one of the things that we’ve done is that our police commissioner has decided that when a new police officer comes on duty, the first three-and-a-half months they have to walk the beat—that’s all they do—so they get used to the community, they get to know the community that they’re dealing with. It’s not—some of these people have not ever walked in the black community. And then they have an opportunity to get to know people like my father, who died in '73 but never spent one day in prison, never was arrested. They need to meet people like that. On the other hand, we need to hear from the police officers and what they are feeling. Many of us have police officers in our own families. So we care about the police. And I get tired of people who try to separate us. They say, “Oh, if you are for accountability and if you're for respect and if you’re for good policing, you must be against police.” Well, that’s simply not true. All right?

AMY GOODMAN: Last question: Your thoughts on the women who just stepped forward, the mothers of those who died at the hands of either police or vigilantes?

REP. ELIJAH CUMMINGS: You asked me—keep in mind, my—I have a nephew who, sadly, died five years ago, being robbed. And I went to visit his room the next day, and his brains were splattered on the wall. He was 20 years old, a student at Old Dominion University. And he’s dead at 20. And so, I can really relate to those women, because when a child dies like that, you mourn for what could have been. And so, you know—but I think the key for that, the reason why that was so important and powerful, is so the people understand, just trying to get people to pause and understand the pain, or try to understand it. Those women were very bold. What they did was they took their pain, turned it into a passion to do their purpose. Pain, passion, purpose. And so, I admire them, because they have taken their pain, and now they’re trying to help other mothers not have to go through what they went through. 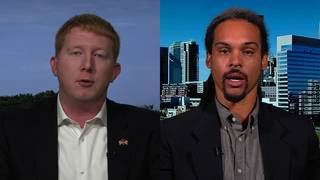