Can the emergence of nontraditional candidates help revive a faltering Democratic Party that is facing its lowest approval rating in nearly a quarter-century? We speak with two Democrats who won key races with support from grassroots sources outside of the Democratic Party. In Charlotte, North Carolina, Braxton Winston is a former middle school football coach who took to the streets in 2015 along with hundreds of people to protest the police killing of Keith Lamont Scott. We also speak with Lee Carter, a Democratic Socialist and former marine who unseated the Republican majority whip of Virginia’s House of Delegates.

StoryMay 26, 2021Marcus Smith “Died Like an Animal” When Cops Hogtied Him. Police Have Known for Decades It Can Kill

AMY GOODMAN: This is Democracy Now! I’m Amy Goodman. Can the emergence of nontraditional candidates help revive a faltering Democratic Party that’s facing its lowest approval rating in nearly a quarter of a century? That’s the question many are asking after these past elections, November 7th, when Democrats did win key races that marked the first major wins under Trump that could bolster their party in 2018 midterms, when control of Congress will be up for grabs.

Democrats managed to take the governor’s seat in Virginia and New Jersey, also flipped two state Legislature seats in Georgia and a whopping 15 seats in Virginia. In total, 19 candidates backed by Our Revolution, Bernie Sanders’ group, and 15 members of Democratic Socialists of America won seats. Meanwhile, Maine voted for Medicaid expansion by referendum. In some of the victories, support came from grassroots sources outside the Democratic Party.

For more, we’re joined by two of the candidates who won, but who hail from nontraditional political backgrounds, and they challenge traditional definitions of electability. In Washington, D.C., we’re joined by Lee Carter, a Socialist veteran of the U.S. Marine Corps, who unseated the majority whip of the Virginia House. He just came up from Manassas to speak with us. And joining us from Charlotte, North Carolina, Braxton Winston is with us. He’s a former middle school football coach who took to the streets in 2015 along with hundreds of people to protest the police killing of Keith Lamont Scott. During one of these protests, Winston faced a line of police in riot gear with his left arm raised and fist clenched. An Associated Press photographer captured the image. It went viral. Braxton’s win on election night secured the second-highest number of votes for an at-large Charlotte City Council seat.

Braxton Winston and Lee Carter, we welcome you both to Democracy Now! Lee, let’s begin with you. You are now a delegate-elect for Virginia’s 50th House District, and you unseated the majority whip in the Virginia Legislature. You are a marine. You are a self-declared Democratic Socialist. You did not have the full support of the Democratic Party behind you, did you? How did you do it?

DELEGATE-ELECT LEE CARTER: Yeah, so, we knew from day one that going up against a member of Republican Party leadership in the South was going to be an uphill battle. So, we knew that there was no way we were going to be able to spend more money than him, so we tried intentionally to avoid a fundraising arms race, that the more mainstream Democratic Party seems to love. You know, they think that the only way to win is to raise more money than the Republicans.

But we decided that we were going to intentionally avoid that and just craft a message that people responded to, and go out there and build a coalition of groups that were invested in this race, you know, from the Democratic Socialists of America and Our Revolution to groups that are more traditionally aligned with the Democratic Party’s voter base, like Planned Parenthood, NARAL and the Sierra Club.

And by doing that, we were able to knock on tens of thousands of doors and deliver a message fighting to empower working people, both economically and politically, straight to people’s doorsteps. And we were able to get thousands of people who don’t traditionally vote, who have become cynical with the political process, to go out there and stand in line on a 40-degree, rainy, miserable day in northern Virginia and cast their vote.

AMY GOODMAN: And what were the key issues that you represented? And talk about the majority whip. I mean, this wasn’t two new candidates, you versus another. This was a man who had been elected time and time again and was the whip of the Virginia majority in the House of Delegates.

DELEGATE-ELECT LEE CARTER: Yeah, that’s correct. So, Virginia Republicans had a 66-to-34 majority in the House of Delegates. It takes 67 votes to override a governor’s veto. So they were very, very close to basically having unilateral control, despite not having the Governor’s Mansion.

And he was an 11-year incumbent. He has been there for quite a long time. And he was really sort of a creature of Richmond. You know, this was a guy who sat on the subcommittee for consumer lending and took money from payday lenders. This was a guy who took money from the health insurance industry and consistently voted against Medicaid expansion.

So, when we were talking to people at their doors, we were able to make this link between money and politics and bad votes, bad outcomes in people’s lives. And we were able to make it on a very, very consistent basis. And that really drove the point home, that there is a problem in American politics, and that problem really is big money, and it manifests itself in countless different ways in people’s day-to-day lives.

DELEGATE-ELECT LEE CARTER: Yeah, so, I decided to run for office after I got hurt at work in the summer of 2015. And my treatment by my former employer and by the Virginia Workers’ Compensation Commission was so horrible that I thought, “I need to step forward, and I need to fix this, so that what happened to me doesn’t happen to anyone else.”

And, you know, because of that, because of that background and the fact that I launched my campaign right in the middle of the 2016 presidential primary, I saw a perfect example of how someone can run a grassroots-based campaign, focused entirely on issues, as long as they have the personal integrity to step forward and say, “I’m not going to be a part of this big-money-in-politics problem.” That was, of course, the presidential run of Senator Sanders. And so, I decided to run exactly that kind of campaign, to say, you know, “These are the issues that I’m fighting for. I’m not going to take any money from for-profit corporations or from industry interest groups.”

But, you know, the fact that we were walking the walk and not taking any money from for-profit corporations really let people know that when I talk about getting big money out of politics, it’s not just something that I’m saying to get votes. It’s really something that I care about.

AMY GOODMAN: I want to bring Braxton Winston in, who was elected to the City Council in Charlotte, North Carolina. The famous image of you that went viral, Braxton, was standing in front of a police line at a protest against police brutality and police killing, and you’ve got your fist in the air. Talk about that moment and what made you decide to run for elected office. And then, of course, you won.

COUNCILMEMBER-ELECT BRAXTON WINSTON: Well, yes, it was a hectic moment. That was just one moment from a long night. It was out there on Old Concord Road, the night—during the night that Keith Lamont Scott was killed by Charlotte-Mecklenburg Police Department. There was a lot of tear gas in the air. That’s why I had my shirt off: I was using it as a mask. But I wanted to continue to protest. And I had my fist in the air. Those chemicals have a really tough reaction on you when you get amplified. So it was sort of to keep myself composed, to sort of continue to make my statements.

But after that night, we continued out on the streets for many nights. There were thousands of people that came from throughout our community. And I really had to assess what my position was here in the city. I knew it was some type of leadership position, some type of change agent. And we really kind of went forth on developing a sort of a citizen journalism-type aspect, where we kept on showing up to events and meetings and actions and disseminating those facts to people in the Charlotte community.

But there was a social activism side of things. I had created a platform, and other people gave me the privilege and opportunity to amplify their voices. But I’m a student of anthropology. That’s what my degree is in from Davidson College. So I look at things through a cultural lens—how we do what we do. And then, while it’s important to organize block to block, organization to organization, person to person, we’re a culture of laws and policy.

So, I saw the best way to effect widespread change, to attack the inequities in the systems that we saw, is through the halls of government, and to affect those laws and policy. And as I was going to different tables and rooms having the conversation, trying to push new leaders and new ideas forward, it became clear that I could be that change agent. So, it was a bit of “If not me, then who?” and “If not now, then when?”

AMY GOODMAN: And, Braxton, finally, we only have 20 seconds, but there were other people who also were elected to the Charlotte City Council, who you considered allies.

COUNCILMEMBER-ELECT BRAXTON WINSTON: Well, we have five new faces to the Charlotte City Council. We’re still a 9-to-2 Democratic majority, but it is definitely a new voice. We’re here to bring leadership in government. We’re not here running for a party office. We’re here to get the city of Charlotte right, and we are all taking that very seriously, along with our first black female mayor, Vi Lyles.

AMY GOODMAN: Well, I want to thank you both so much for being with us. Braxton Winston, newly elected to the City Council of Charlotte, North Carolina, and Lee Carter, a Socialist Democrat, a marine, who was elected delegate for Virginia’s 50th House District, unseating the majority whip.

Marcus Smith “Died Like an Animal” When Cops Hogtied Him. Police Have Known for Decades It Can Kill 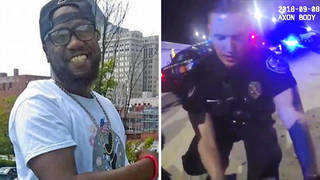 Marcus Smith “Died Like an Animal” When Cops Hogtied Him. Police Have Known for Decades It Can Kill