Father of Muslim Women Murdered in Chapel Hill to Jabara Family: “I Know How You Feel”

As the Jabara family mourns the death of Khalid Jabara in Tulsa, Oklahoma, we remember a similar fatal shooting last year in Chapel Hill, North Carolina. In 2015, Razan Mohammad Abu-Salha, Yusor Mohammad Abu-Salha and her husband, Deah Shaddy Barakat, were shot dead by a white neighbor. Razan was 19 years old, Yusor was 21, and Deah was 23. Police initially said the killings resulted from a dispute over a parking space, but relatives of the victims described the killings as a hate crime. The suspected gunman, Craig Stephen Hicks, has been charged with three counts of first-degree murder. For more, we speak with Dr. Mohammad Abu-Salha, father of Razan and Yusor, and father-in-law of Deah.

AMY GOODMAN: I want to bring in another guest to this conversation, as we continue to talk about the killing of Khalid Jabara in Tulsa, Oklahoma. Dr. Mohammad Abu-Salha is with us. His two daughters, Razan and Yusor, were shot dead, along with his son-in-law, Deah Barakat, last year in Chapel Hill, North Carolina, by a neighbor. Razan was 19; Yusor, 21; Deah was 23. Police initially said the killings were—resulted from a dispute over a parking space, but relatives of the victims described the killings as a hate crime. The suspected gunman, Craig Stephen Hicks, has been charged with three counts of first-degree murder. Dr. Mohammad Abu-Salha joins us from Raleigh, North Carolina.

As you listen to this story, it must sound horrifyingly familiar.

DR. MOHAMMAD ABU-SALHA: It does. And first of all, I would like to express condolences to the Jabara family, Victoria, Rami and the family. Your story is almost identical to ours, and I know exactly how you feel. Khalid was one too many to lose, but we lost three children in seconds. The pain is forever, and our lives are torn up, and we will never be the same. It’s flashbacks. It’s nightmares. It’s diminished energy, sad mood most of the time. And even our relationships and community activities have changed. It’s horrible.

And the similarities between the two cases are so many. Craig Hicks also harassed my children many times. Though he picked on parking for five years, he never threatened anybody this way until he saw my daughter Yusor and my daughter Razan show up on the scene with the hijab and he could tell they’re Muslim, because, before that, he never did that with Deah, my son-in-law, because Deah looked like an average, tall, slim, athletic white American boy. Nobody could tell Deah was a Muslim, because he didn’t—they never had an accent, either. So, once he began to see my daughters, he began to raise the heat. And he told Yusor, my late Yusor, that he hated her and how she dressed and how she appeared. And though the three of them were drop-dead gorgeous children, very well-known philanthropists and charity workers in the region, he saw them as just Muslims, and he zoned in on them, planning to kill them. And he carried out his threats in a very premeditated and cold-blooded fashion.

AMY GOODMAN: We’re going to play Part 2 of this conversation tomorrow. We’re going to continue the conversation after the show. I want to thank Dr. Mohammad Abu-Salha, father of Razan and Yusor Mohammad Abu-Salha, who were shot dead last year. And I want to thank our guests, Rami and Victoria, for joining us from Tulsa. This is Part 1. Stay tuned for Part 2.

From Chapel Hill to Tulsa: Families Speak Out About Deadly Anti-Arab Hate Crimes 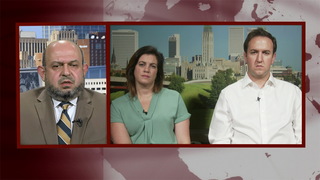 From Chapel Hill to Tulsa: Families Speak Out About Deadly Anti-Arab Hate Crimes