Chicago is once again rocked by protests over police brutality, following the release of video showing the fatal police shooting of an unarmed African-American teenager. The newly released video from police body cameras shows the moments before and after police killed 18-year-old Paul O’Neal on July 28. In the video, police are seen shooting repeatedly at the car O’Neal was driving, which police say was stolen. The video then shows a police officer running over to O’Neal, who is lying face down in a growing pool of blood surrounded by other officers. The officers then handcuff O’Neal with his arms behind his back and search his backpack, as he continues bleeding. The Cook County Medical Examiner’s Office says he was shot in the back. For more, we’re joined by Michael Oppenheimer, the attorney for the family of Paul O’Neal.

StoryJul 23, 2020“Her Front Teeth Were Knocked Out”: Chicago Teen to Sue Police Officer Who Hit Her at a Protest

AMY GOODMAN: In Chicago, hundreds of protesters marched through the streets and blocked traffic in a series of demonstrations over the weekend following the release of video showing the fatal police shooting of an unarmed African-American teenager. The newly released video from police body cam shows the moments before and after police killed 18-year-old Paul O’Neal. It was July 28th. In the video, police are seen shooting repeatedly at the car O’Neal was driving, which police say was stolen. The video then shows a police officer running over to O’Neal, who’s lying face down in a growing pool of blood surrounded by other officers. The officers then handcuff O’Neal with his arms behind his back and search his backpack as he continues to bleed. Afterward, one of the officers can be heard complaining he’ll be on desk duty for the 30 next days. Listen carefully.

AMY GOODMAN: Paul O’Neal died shortly afterwards at Northwestern Memorial Hospital. The Cook County Medical Examiner’s Office says he was shot in the back. Police say they’re investigating why the body camera worn by the police officer who shot O’Neal did not capture the actual moments of the fatal shooting. Three officers have been suspended in relation to the shooting. This is Chicago Mayor Rahm Emanuel speaking Monday.

MAYOR RAHM EMANUEL: There’s a gut reaction because it’s a loss of life, and I think it’s a horrible thing, and, as I said, it’s a tragedy. I think what I’m trying to do is get—superintendent took his immediate steps on both the material, getting it out, as well as what he’s done with the officers. I’m reserving any judgment while it’s in the middle of investigation, because there’s a lot of questions, and I probably want to echo what the superintendent says. There are more questions at this time than there are answers, and I don’t want to jump to a conclusion until we know some basic fundamental facts from an event that happened.

AMY GOODMAN: This comes as today marks the second anniversary of the death of African-American teen Michael Brown, who was 18 when he was killed by white police officer Darren Wilson in the suburb of Ferguson, Missouri.

For more, we’re joined by two guests. Charlene Carruthers is the national director of the Black Youth Project 100, and Michael Oppenheimer is the attorney for the family of Paul O’Neal.

We welcome you both to Democracy Now! First, Michael Oppenheimer, what do you understand took place on July 28th?

MICHAEL OPPENHEIMER: Well, as the mayor said, there’s a lot of unanswered questions. All we know is that he was in—Paul was an 18-year-old kid who graduated from high school this past year, when he was 17. He was in a stolen car. The police, as you can see from the video that I’ve seen, go on a chase for that stolen car. It looked to me like a police officer got out of the car; as the car was going by, shot improperly at the car. Another police officer, going the wrong way on a one-way street, rammed the car that Paul was in. Paul got out of the car. As he was running away, at some point, although we don’t see it on the body cam, he was shot in the back by unknown police officers.

AMY GOODMAN: They also shot at the car, right?

MICHAEL OPPENHEIMER: They shot at the car as the car was going by the police officer, yes.

AMY GOODMAN: And what has happened at this point? Police officers have been, what, suspended?

MICHAEL OPPENHEIMER: It is my understanding that police officers involved in the shooting have been suspended by the superintendent, Eddie Johnson, and that’s it. We have filed a federal civil rights lawsuit in this case. It was filed last week in federal court. But all that’s happened so far is the police officers have been suspended. As you heard from one of the officers, as he swore, he said, “Now I’m going to be on desk duty for 30 days.”

AMY GOODMAN: That was his response to killing a young man.

MICHAEL OPPENHEIMER: That was his response to a young man lying there bleeding to death on the ground as he was being handcuffed.

AMY GOODMAN: And this showing the man, Paul, laying on the ground in his own blood as the pool was getting larger and larger of that blood, and they were busy handcuffing him.

MICHAEL OPPENHEIMER: It’s quite disturbing. They’re busy handcuffing him, and while he’s being handcuffed lying there bleeding to death, other officers are checking themselves for injuries. And one officer says, “I think my leg hurts,” or something to that effect.

AMY GOODMAN: What about the video? Why didn’t the officer who shot him have his video camera on?

MICHAEL OPPENHEIMER: Well, that’s the big question. For years, we’ve had other cases that we’ve fought for the release of videos, including Ronald Johnson. You’ve seen the Laquan McDonald video. Traditionally, the Chicago Police Department and the city have fought the release of these videos. Now, in, quote, “a spirit of transparency,” they released this video only a few short weeks after the shooting. It’s new technology. And in the age of GoPro and Instagram and all these things, how in the world does the officer who actually shot him—how does his body cam not work? I smell a cover-up. They’re saying he may not have turned it on, or it wasn’t functioning.

AMY GOODMAN: On Friday, the family of Paul O’Neal, who you represent, Michael, called for answers as protesters confronted Chicago’s police superintendent during a news conference. This is O’Neal family spokesperson Ja’Mal Green.

JA’MAL GREEN: If you looked at the video, one of the body cameras supposedly was not working, but that officer supposedly turned it on as he was leaving the incident. I don’t believe that story. I think we need to investigate more into what happened. I’m putting pressure on Superintendent Johnson to see if that camera was really recording, if that camera was turned off, because it seems to me that all the other cameras were working. That one should have been working, and it shouldn’t have just magically came on after the incident happened.

MICHAEL OPPENHEIMER: I couldn’t agree more with Ja’Mal. I mean, how in the world does this camera go off, and then it goes on? I think the investigation needs to show that there may be unknown footage. We’re still doing our investigation.

AMY GOODMAN: Charlene Carruthers, you’re national director of Black Youth Project 100. You’ve been out in the streets. Hundreds of people have been protesting. What are you calling for?

CHARLENE CARRUTHERS: Well, what we’ve witnessed here, once again, is not simply a failure or a technical failure of a piece of equipment, but a failure of the Chicago Police Department to keep black people safe. Here in the city of Chicago, we invest about 40 percent of our public service budget to policing, and the amount of money that’s been invested in body cameras has been astronomical. And for me and for the folks that I work with every single day, body cameras don’t help us sleep at night. What it tells us, that while police officers can have a camera on their body, they can still take it upon themselves to take our lives. And so, we’re calling for what we’ve been calling for: divestment from policing and investment in our communities, so that we can create actual safe communities and not communities that rely on police or prisons to keep us safe.

Murdered by a SWAT Team for Traffic Tickets: Inside the Police Killing of Black Mother Korryn Gaines

NEXTMurdered by a SWAT Team for Traffic Tickets: Inside the Police Killing of Black Mother Korryn Gaines 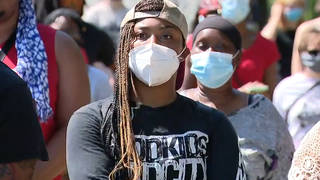 “Her Front Teeth Were Knocked Out”: Chicago Teen to Sue Police Officer Who Hit Her at a Protest