We go to Wisconsin to get reaction from The Nation’s John Nichols to a new report on possible illegal fundraising by the state’s Republican governor, Scott Walker, for the third-party group Wisconsin Club for Growth. The report is based on leaked documents from an investigation the state’s highest court halted in 2015. “Governor Walker has survived revelations of this sort before,” Nichols says, but adds that he could face a challenge if the U.S. Supreme Court decides to allow the investigation to proceed. In its Citizens United ruling, Nichols notes, “the court said that transparency, knowing how the money is raised and who is raising it … was a vital part of guarding against the legitimate concerns of citizens about corruption and about the danger of allowing corporations and wealthy individuals to be so dominant in our politics.”

JOHN NICHOLS: It’s been big news in Wisconsin—front page of the newspapers, on radio. It’s funny. As I was driving to the studio this morning, it was the lead story on public radio. And so, this is being discussed a great deal.

But we do—I would suggest that Wisconsin is like the rest of the country in this regard, and it is a challenging situation, because the lines have been drawn so hard and so deeply that instead of what you would have seen maybe 20, 30 years ago, when you had a revelation of this sort, where everybody is shocked and horrified and says, “Well we’ve got to do something about this,” you have Democratic legislators calling for investigations, you have public interest groups calling for investigations. You have Republican legislators kind of jumping into process and saying, “Well, you know, how did The Guardian—what’s The Guardian got here? How did this happen?” And this—one thing to remember is that the John Doe investigations—a couple of them have been going on for a long time in Wisconsin—there have been a lot of leaks. Clearly, what The Guardian has now is the biggest leak and the most detailed one, but there have been a lot over the years. And so, I think that you’re seeing individuals and groups kind of go to their camp, go to their side, and fight this out.

And remember that Governor Walker has survived revelations of this sort before. And weirdly enough, that’s where you begin to see the intercept. The Wisconsin Democracy Campaign said back in 2012, or revealed back in 2012, when it analyzed all the money that the governor had, as well as many of the groups that helped him in that campaign or were sympathetic to him in that recall campaign, that he had roughly, in the final fight there, a two-to-one advantage financially. He literally was able to overwhelm the process with money. And at the heart of this, we now know more about where the money came from and how it was raised, but the reality of the money is still there, that great mass of money.

And so, in Wisconsin, one of the real challenges now is this question. In a state that is essentially under one-party rule, where you now have evidence of a governor flying around the country, collecting money from billionaires and corporate interests to protect himself, you have evidence of his legislative allies literally acting in the way that those interests and those allies would prefer, and then you have a court, a state Supreme Court, on which people who clearly should have recused themselves from these cases are not only voting on these cases, but actually writing decisions. I think an awfully lot of Wisconsinites are horrified, but also uncertain about how this thing gets fixed in this state. And so, I think that’s why there’s an awful lot of interest in the U.S. Supreme Court examination of these issues.

JUAN GONZÁLEZ: Well, John, precisely, I was going to ask you about that. The prosecutors who were denied the chance to go forward with this case have appealed. And what’s your sense of whether the Supreme Court will take the case up, and also what the results could be, given the current composition of the court?

JOHN NICHOLS: Well, the court is missing a member, so you’ve got a closer split on it than you historically have. And you should always be careful about trying to read the minds of members of the U.S. Supreme Court. However, one thing that’s interesting here, and I don’t think it’s discussed enough, when the United States Supreme Court did the Citizens United ruling—which I’ve been very, very critical of for a long time; in fact, Bob McChesney and I wrote a book about it called Dollarocracy, where we examine a lot of these issues—one of the interesting things in the Citizens United ruling is that the court said that transparency, knowing how the money is raised and who is raising it and who it’s coming from, was a vital part of guarding against the legitimate concerns of citizens about corruption and about the danger of allowing corporations and wealthy individuals to be so dominant in our politics. So this court, even conservative members of it, have acknowledged the necessity of transparency, of knowing what’s going on and, obviously, of maintaining campaign finance laws that were on the books, that are, in many cases, still on the books. So, one would hope that the United States Supreme Court would recognize the need to step in on this, if only to clarify their own statements of the past about the absolute necessity of transparency.

AMY GOODMAN: Well, we want to thank you both for being with us, John Nichols, political writer for The Nation; Ed Pilkington, chief reporter for The Guardian US, author of the explosive new report called “Because Scott Walker Asked.” And you can go to the documents right at his site, and we’ll link to it at democracynow.org. Thanks, Ed. Thanks, John.

This is Democracy Now! When we come back, what’s happened to thousands of people killed in the Philippines? We’ll be talking about the new president, Duterte, and then a remarkable new StoryCorps project. Stay with us. 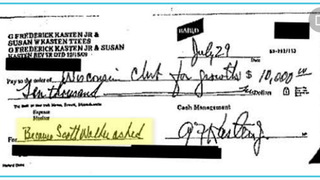