Is an Arkansas Town Operating a “Hot Check” Court as an Illegal Debtors’ Prison?

A woman in Sherwood, Arkansas, just spent 35 days in a county jail after she accidentally bounced a $29 check five years ago. Nikki Petree was sentenced to jail last month by a judge accused of running a debtors’ prison. She had already been arrested at least seven times over the bounced check and paid at least $600 in court fines. Her release comes as the Lawyers’ Committee for Civil Rights Under Law, the ACLU and an international law firm have filed a lawsuit to challenge the modern-day debtors’ prison in Sherwood. We speak with Kristen Clarke, president and executive director of the Lawyers’ Committee for Civil Rights Under Law, who says Sherwood jails people in violation of a long-standing law that forbids the incarceration of people for their failure to pay debts.

JUAN GONZÁLEZ: We turn now to Arkansas to look at the case of a mother who just spent 35 days in a county jail after she accidentally bounced a $29 check five years ago. Nikki Petree was sentenced to jail just last month by a judge accused of running a debtors’ prison. Petree had already been arrested at least seven times over the bounced check, and paid at least $600 in court fines—more than 20 times the original debt. Petree said, quote, “Every time I go to jail, they’d let me out immediately for $100. They’d turn around and add $600 or $700 more to my bond. I couldn’t afford to pay. They cornered me, and there was no way out from underneath it. I felt overwhelmed and hopeless,” she said.

AMY GOODMAN: Nikki Petree’s release comes as the Lawyers’ Committee for Civil Rights Under Law, the ACLU and the international law firm Morrison & Foerster have filed a class-action civil rights lawsuit challenging the modern-day debtors’ prison in Sherwood, Arkansas. The lawsuit was filed in the United States District Court for the Eastern District of Arkansas against the city of Sherwood, Arkansas; Pulaski County, Arkansas; and Judge Milas Hale. Petree is one of four named plaintiffs in the suit who allege their constitutional rights were violated by the Hot Check Division of the Sherwood District Court when they were jailed for their inability to pay court fines and fees. The lawsuit alleges that Sherwood, Pulaski County, engages in a policy and custom of jailing poor people who owe court fines, fees and costs stemming from misdemeanor bad check convictions. It also says they jail people in violation of a long-standing law that forbids the incarceration of people for their failure to pay debts.

For more, we’re going to Washington, D.C., to Kristen Clarke, president and executive director of the Lawyers’ Committee for Civil Rights Under Law, one of the groups that filed this lawsuit.

Welcome to Democracy Now! Can you explain exactly what happened to Nikki Petree? She ends up in jail for a $28-and-change check, that she didn’t realize had bounced because her last paycheck hadn’t put in, and she ends up in jail five years later?

KRISTEN CLARKE: Yeah, Nikki Petree is not alone. This is a debtors’ court system that’s been in place in Sherwood that preys on the backs of poor people. Nikki Petree is one woman who exemplifies what happens if you’re poor in Sherwood. She wrote a check that was returned for insufficient funds about five years ago. That check amounted to about $28. And since that time, she’s spent more than 25 days in jail and has paid more than $600 in fines to the local court system. That is money that she did not have. She lives below the poverty line. She remains indebted by more than $2,500 to the local court system. And she was jailed at the time that we filed this suit last week. And there are so many people like her in Sherwood. We filed this lawsuit to bring an end to a court system that we believe preys on the backs of poor people.

JUAN GONZÁLEZ: Well, Kristen Clarke, in that lawsuit, you raise the issue of why this is happening. You say that local courts and municipalities throughout Arkansas have used the threat and the reality of incarceration to trap their poorest citizens in a never-ending spiral of repetitive court proceedings and ever-increasing debt. But you say also that faced with opposition to increased taxes, municipalities have turned to creating a system of debtors’ prisons to fuel the demand for increased public revenue. How extensive is this in Arkansas that municipalities are using this as a new revenue source?

KRISTEN CLARKE: It’s not only the case in Arkansas, but all over the country we’re seeing the resurgence of debtors’ prisons. In Sherwood, this is a court that’s generated more than $12 million over the course of five years by imposing fines and fees over and over again on poor people who wrote checks to local merchants that were returned for insufficient funds. In Ferguson, Missouri, we saw a local court system that was built on this concept of entangling people in the court system for transit, for traffic offenses. That court generated $20 million off the backs of poor people in Ferguson. But we know that these are not isolated practices.

What’s happened is that in 1983 the Supreme Court made clear that this is unconstitutional, that you can’t lock people up merely because they are poor. But what we’ve seen is the resurgence of debtors’ prison, because there hasn’t been enough enforcement to put a check on court systems like the one in place in Sherwood. So we filed this lawsuit to bring an end to an era that’s been marked by a court system in which one judge presides, Judge Butch Hale, where he has disregarded the due process rights of poor people at every turn.

What happens in Sherwood is that people get on line outside his courtroom. They are forced to sign a waiver of their right to counsel. Nobody is allowed in that courtroom but the defendants. If you come with a family member, an advocate or friend, you’re not allowed in. There are no tapes or recordings of the proceedings, no transcripts of the proceedings. People appear without counsel by their side. No one explains their rights to them. And every time they stand up before Judge Butch Hale, he imposes fine, fee after fine and fee, and court costs on them, subjecting these people to a spiraling cycle of debt.

AMY GOODMAN: I mean, it is an astounding story about Nikki Petree. Didn’t she end up owing something like $2,600 on this $28-and-change check?

KRISTEN CLARKE: That’s exactly right. She remains indebted by more than $2,500, $2,600. She spent more than 25 days in jail. She’s already come out of pocket more than $600. And that’s money that she doesn’t have, because she, like everybody who appears before this court, are poor people. This is a court that preys on the most vulnerable people in Sherwood. And they make a profit off of this. 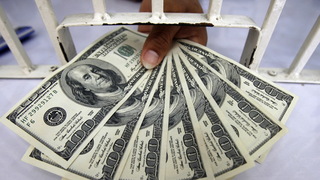