Committee to Protect Journalists: Watch Out for “Leak Investigations” Targeting Journos Under Trump

During his press conference on Wednesday, President-elect Donald Trump lashed out at reporters. He slammed CNN as “fake news,” called BuzzFeed a “failing piece of garbage” and refused to answer questions from CNN’s Jim Acosta after his outlet reported that top intelligence officials had briefed Trump, President Obama and top lawmakers over claims that Trump representatives met repeatedly with Russian officials during the 2016 campaign and discussed the hacking of the DNC and the email of Hillary Clinton campaign chair John Podesta. BuzzFeed later published a dossier, prepared by British former intelligence officer Christopher Steele, which contains unverified allegations, including a charge that Russian officials have a sex tape from 2013 involving Trump and hired sex workers. For more on the incoming Trump administration’s relationship with the press, we are joined by Joel Simon, executive director of the Committee to Protect Journalists.

NERMEEN SHAIKH: During his press conference on Wednesday, President-elect Donald Trump lashed out at reporters. He slammed CNN as “fake news” and called BuzzFeed a “failing piece of garbage.” The diatribe came as CNN reported Tuesday that top intelligence officials had briefed Trump, President Obama and top lawmakers over claims that Trump representatives met repeatedly with Russian officials during the 2016 campaign and discussed the hacking of the DNC and the email of Hillary Clinton campaign chair John Podesta. BuzzFeed later published a dossier, prepared by British former intelligence officer Christopher Steele, which contains unverified allegations, including a charge that Russian officials have a sex tape from 2013 involving Trump and hired sex workers. On Wednesday, Trump refused to answer questions from CNN’s Jim Acosta.

PRESIDENT-ELECT DONALD TRUMP: No, not you. Not you.

JIM ACOSTA: Can you give us a chance?

JIM ACOSTA: You are attacking our news organization.

JIM ACOSTA: Can you give us a chance to ask a question, sir?

JIM ACOSTA: Sir, can you—

JIM ACOSTA: Mr. President-elect, can you give us a question?

JIM ACOSTA: You’re attacking us. Can you give us a question?

JIM ACOSTA: Can you give us a question?

JIM ACOSTA: Can you state categorically—

AMY GOODMAN: Donald Trump gave the next question to a reporter with Breitbart News. The website that champions the white nationalist movement was headed, until last August, by Trump’s chief strategist, Steve Bannon. CNN’s Jim Acosta later said Trump’s spokesperson, Sean Spicer, threatened to have him expelled if he tried to ask another question.

Well, for more on the incoming Trump administration’s relationship with the press, we turn to Joel Simon, executive director of the Committee to Protect Journalists.

JOEL SIMON: Good to be on.

JOEL SIMON: Well, I think that my response is just we see on display the attitude that Trump exhibited throughout his campaign and in every interaction with the media, which is that he has a framework in which the media, as long as it amplifies his message, he welcomes it, but as soon as it adopts a critical posture, there’s a completely different response. And what’s really concerning here is, OK, he’s angry. You can understand why he’s angry. I mean, these reports were very damaging. But now that he’s going to become president, how will these attitudes be transformed into policies?

AMY GOODMAN: Well, you have his press secretary, for example, Sean Spicer, threatening Acosta, saying he’s going to throw him out if he tries to ask another question.

JOEL SIMON: Yeah, I mean, that’s very alarming. But I think what’s the broader context here is this involves a leak. OK? This information was leaked. Now, as president, with Jeff Sessions as attorney general, are we going to see leak investigations? I think we are. His framework is that these leaks from intelligence officials—apparently, that’s where they come from, we don’t know, but it’s certainly possible—create an atmosphere similar to Nazi Germany. OK? So we can expect aggressive leak investigations that—

AMY GOODMAN: So, just to be clear—

AMY GOODMAN: it was Trump who said—who compared intelligence officials—

JOEL SIMON: Exactly. So, that framework suggests there will be aggressive leak investigations. The Obama administration has created a legal framework through its aggressive prosecution of leakers, where journalists are very vulnerable. And I think it’s highly likely that if these attitudes, this anger, this lashing out at the media every time he’s criticized—if those are transformed into policies, my greatest concern is about aggressive leak investigations, which ensnare journalists and which represent a significant threat to journalists in this country and potentially globally.

NERMEEN SHAIKH: Well, you have—CPJ is a global organization.

NERMEEN SHAIKH: But you have a special series called “Transition to Trump.”

NERMEEN SHAIKH: So could you highlight some of the key issues you look at in that series?

JOEL SIMON: Well, we’re definitely looking at this issue of source protection in the new administration. We’re also looking at issues like encryption and the ability of journalists to use technology to protect their sources. The U.S. sets a global standard in this area, because so many of the technology that’s used globally is U.S.-based. And we have not seen a commitment from President Trump and his Cabinet appointees to protect this legal framework; to the contrary—or this norm, I should say. And so, I think that in the next administration, we’re very concerned that there will be a weakening of the protections that journalists have relied on to be able to carry out their communication with confidential sources.

AMY GOODMAN: You know, people in this country do not necessarily like to see the U.S. compared to other countries. But how is the U.S. when it comes to reporters, and particularly on how Trump is dealing with reporters?

JOEL SIMON: Well, look, we have—we have a First Amendment. We have a vital and robust press. We have a legal framework. We have independent institutions. So, you know, you have to—you have to recognize that.

But I think that what alarms me is this kind of framework in which information itself and the role of the media is denigrated, is—it’s an environment in which there’s confusion, obviously, about what’s real, what’s not real, what’s news, what is not news. Fake news is being bandied about. And what that does is it creates an environment in which it almost inoculates Trump from critical media coverage. And that’s the framework that he’s creating. And that’s a framework that we see in authoritarian countries, where the media is denigrated, sidelined, marginalized, attacked, confidence is eroded, and that creates a framework in which authoritarian leaders assert more power.

AMY GOODMAN: —because your name got global recognition, to say the least—

AMY GOODMAN: —this weekend, when she was honored with a lifetime achievement award by the Golden Globes. Meryl Streep used her speech to call for protections of the free press.

MERYL STREEP: There was one performance this year that stunned me. It sank its hooks in my heart, not because it was good. It was—there was nothing good about it. But it was effective, and it did its job. It made its intended audience laugh and show their teeth. It was that moment when the person asking to sit in the most respected seat in our country imitated a disabled reporter—someone he outranked in privilege, power and the capacity to fight back. … When the powerful use their position to bully others, we all lose.

OK, go up with that thing. OK, this brings me to the press. We need a principled press to hold power to account, to call them on the carpet for every outrage. That’s why—that’s why our founders enshrined the press and its freedoms in our Constitution. So I only ask the famously well-heeled Hollywood foreign press and all of us in our community to join me in supporting the Committee to Protect Journalists, because we’re going to need them, going forward, and they’ll need us, to safeguard the truth.

NERMEEN SHAIKH: That was Meryl Streep speaking at the Golden Globes on Sunday. So, Joel, could you comment on what she said? And also, before we end, how much can Trump actually do to limit press freedom?

JOEL SIMON: Well, first on what she said, of course, this was amazing to see this issue elevated to this level. And, of course, we’ve seen a tremendous surge in contributions, and we’re grateful for that. But I think what’s really important here is the press, I think, was invigorated by this. The press has a role here. And I think that role has been denigrated and marginalized. That accountability is crucial. That’s why—that’s why there is a First Amendment. That’s why we protect press freedom. And so, I think that was really validating and uplifting to journalists.

In terms of what Trump can do, I mean, clearly, what he can do is he can create a chilling atmosphere. He’s already doing that. If you criticize Trump and he lashes out at you, which he inevitably does, it will unleash an army of trolls, and you will be confronting that. And that’s chilling. That’s not a legal threat, but it definitely chills critical speech.

But I think the main thing that he can do and the main thing that we’re concerned about is this kind of leak investigations in which journalists are ensnared. And again, the legal framework exists. It’s actually been weakened under the Obama administration. So the framework has been laid. If we see a series of aggressive leak investigations based on critical coverage of Trump and his activities, it’s going to be a very, very rough four years.

AMY GOODMAN: And how did you do after Meryl Streep actually named you guys?

JOEL SIMON: Oh, it was amazing. Just, you know, we have just been—I mean, we’ve been processing donations. And you know what’s great? And I think you’d recognize this. They’ve been small. They’ve been $25, $50, $100. You know, that’s just amazing. And there have been thousands of them. So, it’s really been affirming and uplifting to the work that we do and, I think, to the work of journalists, generally, to see this kind of outpouring.

This is Democracy Now! When we come back, we’ll look at the Rex Tillerson hearing and also a hearing that will be held today. Will the next defense secretary be General Mattis? Stay with us. 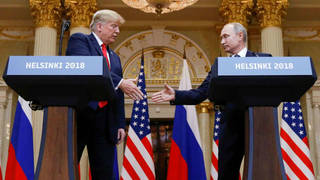