On Wednesday, scientists with both NASA and NOAA—the National Oceanic and Atmospheric Administration—confirmed 2016 was the hottest year on record, topping the previous record set in 2015, which topped the previous record only one year earlier. The unprecedented warming of the planet due to human-caused climate change comes as Oklahoma Attorney General Scott Pruitt testified in front of the Senate Wednesday during his confirmation hearing to be the head of the Environmental Protection Agency. Pruitt has long denied the overwhelming scientific consensus on climate change. Dozens of people protested outside his hearing. At least three people were arrested. We hear Sen. Bernie Sanders questioning Pruitt, and speak to Wenonah Hauter, executive director of Food & Water Watch.

AMY GOODMAN: On Wednesday, scientists with both NASA and NOAA—the National Oceanic and Atmospheric Administration—confirmed 2016 was the hottest year on record, topping the previous record set in 2015, which topped the previous record only a year earlier. The unprecedented warming of the planet due to human-caused climate change comes as Oklahoma Attorney General Scott Pruitt testified in front of the Senate committee on Wednesday during his confirmation hearing to be the head of the Environmental Protection Agency. Pruitt has long denied the overwhelming scientific consensus on climate change. Dozens of people protested outside his hearing; at least three were arrested. This is Scott Pruitt being questioned by Vermont Senator Bernie Sanders.

SEN. BERNIE SANDERS: In some manner.

SEN. BERNIE SANDERS: Ninety-seven percent of the scientists who wrote articles in peer-reviewed journals believe that human activity is the fundamental reason we are seeing climate change. You disagree with that?

AMY GOODMAN: Senator Bernie Sanders went on to press Pruitt to state his position on the relationship between human activity and climate change.

SEN. BERNIE SANDERS: So you are applying for a job as administrator for the EPA to protect our environment. Overwhelming majority of scientists say we have got to act boldly. And you’re telling me that there needs to be more debate on this issue?

SCOTT PRUITT: My personal opinion is immaterial to the—

SEN. BERNIE SANDERS: You are going to be the head of the agency to protect the environment, and your personal feelings about whether climate change is caused by human activity and carbon emissions is immaterial?

SCOTT PRUITT: Senator, I’ve acknowledged to you that the human activity impacts the climate.

SEN. BERNIE SANDERS: Impacts. If that’s the kind of EPA administrator you will be, you’re not going to get my vote.

AMY GOODMAN: To talk more about Scott Pruitt, we’re joined by Wenonah Hauter, executive director of Food & Water Watch, recently wrote the book Foodopoly: The Battle Over the Future of Food and Farming in America.

Can you talk about Scott Pruitt as the head of the EPA, the current Oklahoma attorney general?

WENONAH HAUTER: Well, Scott Pruitt has built his career on being a shill for the oil and gas industry. He sued EPA more than 14 times when he was the attorney general of Oklahoma. He helped organize more than a dozen attorney generals around the country to be part of a large right-wing national law firm to harass EPA and other Obama-led federal agencies. When asked during the confirmation hearing about whether he knew how many children had asthma from the dirty air from power plants, he said no. Ten percent of children in Oklahoma have asthma.

AMY GOODMAN: I want to turn to Oregon Senator Jeff Merkley questioning Scott Pruitt about a 2011 letter the Oklahoman attorney general sent to the EPA opposing regulations limiting emissions from the energy sector. Merkley said much of the letter was largely written by the Oklahoma company Devon Energy.

SCOTT PRUITT: Senator, I—with respect, I disagree. The efforts that I took as attorney general were representing the interests of the state of Oklahoma.

SEN. JEFF MERKLEY: Why do you need an outside oil company to draft a letter when you have 250 people working for you?

SCOTT PRUITT: Senator, as I’ve indicated, that was an effort that was protecting the state’s interest and making sure that we made the voices of all Oklahomans heard on a very important industry to our state. There was concern—

SEN. JEFF MERKLEY: You said all heard, but you only sent it on behalf of a single voice: the oil company. Thank you.

WENONAH HAUTER: [inaudible] Scott Pruitt, in writing my new book, Frackopoly, and what I found was that he was allowing industries like Devon, the giant driller and fracker, to ghostwrite letters harassing the Environmental Protection Agency.

WENONAH HAUTER: Well, Devon benefits from drilling and fracking oil and gas. EPA was trying to measure the amount of methane emissions. Methane is a greenhouse gas that’s almost 90 times more potent than carbon. So he wrote—under the seal of Oklahoma, he sent this letter, that was 95 percent written by Devon lobbyists, to the Environmental Protection Agency. He’s also worked with a lot of energy companies, like Harold Hamm’s Continental Resources, that drills and fracks for oil in North Dakota. He engaged in a lawsuit with Harold Hamm’s company, Continental, suing the Interior Department to prevent more animals from being listed under the Endangered Species Act. More than 14 times, he sued EPA, an agency that he has basically demonized. He’s made no secret of the fact that he wants to dismantle the Environmental Protection Agency, with the blessing of Donald Trump. 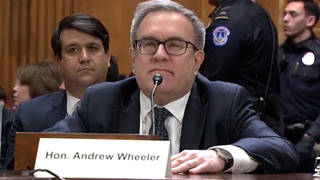