Trump has just nominated former Georgia Governor Sonny Perdue to be secretary of agriculture. Perdue ran a grain and fertilizer business before becoming Georgia’s first Republican governor since Reconstruction. Environmental activists have slammed Perdue for receiving hundreds of thousands of dollars in subsidies for chemical corporations and factory farming. We speak to Wenonah Hauter, executive director of Food & Water Watch.

StorySep 25, 2020“The Election That Could Break America”: Inside How Trump & GOP Could Steal the Vote

AMY GOODMAN: I also wanted to ask you about former Georgia Governor Sonny Perdue, who Trump has just nominated to be secretary of agriculture—Perdue, who ran a grain and fertilizer business before becoming Georgia’s first Republican governor since Reconstruction; environmental activists slamming Perdue for receiving hundreds of thousands of dollars in subsidies for chemical corporations and factory farming. Your response, Wenonah?

WENONAH HAUTER: Yes, the agribusiness and chemical industry is just applauding his nomination. The former governor’s cousin is the senator, the junior senator, from Georgia. They are in a business together, Perdue Partners, that engages in international trade of agricultural products. When Perdue was the governor of Georgia, he named his cousin David to be at the Port Authority, an agency that’s very involved in regulating the industry that they started together. He has a lot of ethics issues. And certainly, Senator David Perdue should recuse himself from voting in the Agriculture Committee on this nomination and on the floor.

AMY GOODMAN: And finally, Rick Perry, the former governor of Texas, who has been on the board of Energy Transfer Partners, which owns the Dakota Access pipeline, his hearing is today, his confirmation hearing for the department of, uh—well, I’m just saying—having the same memory lapse that the former governor did when he was running for president and said he couldn’t remember the agency he wanted to get rid of. It was the Department of Energy.

WENONAH HAUTER: That’s right. Well, the public probably knows Perry best because he danced with the stars. He is completely unfit for office. The Department of Energy oversees the nation’s weapons arsenal. Thirty percent of the industry’s—or two-thirds of the Department of Energy’s budget goes to dealing with this horrible legacy of nuclear weapons. And he didn’t even know this fact when he accepted the nomination. And, in fact, he thought that the Department of Energy would allow him to do what he did when he was the governor of Texas, and that is to promote the oil and gas industry. And he just recently, in December, gave up his board membership to Energy Transfer Partners. You really couldn’t have a bigger advocate for the oil and gas industry. And I think what this shows—Perry, Tillerson, Pruitt—is that the industry is no longer satisfied with just getting influence through campaign contributions. Now they actually want to put their shills in these agencies to control public policy. We will be working very hard to defeat their agenda.

AMY GOODMAN: Wenonah Hauter, we want to thank you for being with us, executive director of Food & Water Watch. Her book, Foodopoly: The Battle Over the Future of Food and Farming in America.

This is Democracy Now! When we come back, Dr. Sidney Wolfe joins us to talk about Congressman Price as head of the Health and Human Services administration, if he’s approved. Stay with us. 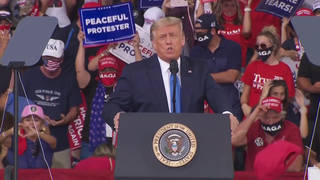 “The Election That Could Break America”: Inside How Trump & GOP Could Steal the Vote