Today marks President Obama’s last full day in office. On Friday at noon, Supreme Court Chief Justice John Roberts will swear in Donald Trump as the country’s 45th president. On Wednesday, in his last press conference as president, Obama defended his decision to commute the sentence of Army whistleblower Chelsea Manning, and condemned the Israeli occupation. He also warned Trump that he will not stay silent if he sees what he called the nation’s core values at risk. To look back at Obama’s legacy and what lies ahead with the new administration, we speak to Eddie Glaude, chair of the Department of African American Studies at Princeton University. He is author of several books, most recently, “Democracy in Black: How Race Still Enslaves the American Soul.”

AMY GOODMAN: Today marks President Obama’s last full day in office. On Friday at noon, Supreme Court Chief Justice John Roberts will swear in Donald Trump as the country’s 45th president. On Wednesday, in his last press conference as president, Obama defended his decision to commute the sentence of Army whistleblower Chelsea Manning, and condemned the Israeli occupation. He also warned Trump that he will not stay silent if Obama sees what he called the nation’s core values at risk.

PRESIDENT BARACK OBAMA: But there’s a difference between that normal functioning of politics and certain issues or certain moments where I think our core values may be at stake. I put in that category if I saw systematic discrimination being ratified in some fashion. I put in that category explicit or functional obstacles to people being able to vote, to exercise their franchise. I put in that category institutional efforts to silence dissent or the press. And for me, at least, I would put in that category efforts to round up kids who have grown up here and, for all practical purposes, are American kids, and send them someplace else, when they love this country. They are our kids’ friends and their classmates and are now entering into community colleges or, in some cases, serving in our military. The notion that we would just arbitrarily, or because of politics, punish those kids, when they didn’t do anything wrong themselves, I think, would be something that would merit me speaking out. It doesn’t mean that I would get on the ballot anywhere.

AMY GOODMAN: We begin today’s show looking back at Obama’s legacy and what lies ahead with the new administration. We’re joined by two guests. Here in New York, Rashid Khalidi, the Edward Said professor of Arab studies at Columbia University, author of several books, his most recent, Brokers of Deceit: How the U.S. Has Undermined Peace in the Middle East. And at Princeton University, we’re joined by Eddie Glaude, chair of the Department of African American Studies. He’s author of a number of books, most recently, Democracy in Black: How Race Still Enslaves the American Soul, which is just out in paperback.

Professor Glaude, let’s begin with you. Your assessment of President Obama’s message in this last news conference, in the last 48 hours that he was president, holding it in the press pool room—something that has been threatened, to say the least, in the last few days with the Trump administration saying they were thinking of moving the press somewhere nearby?

EDDIE GLAUDE: Well, I think it was important for the president to kind of identify the threat that Donald Trump poses to the fourth estate. He did it in his own unique and, of course, centrist way, but the idea of calling attention to the fact that a free and independent press may very well be under siege as Donald Trump enters the White House, I think, is an important—was an important—an important gesture. I would—you know, I would want to caution, though, that the way in which the president made the point, he, of course, wasn’t attentive to the corporate dimensions of the press, that in some ways the so-called free press has been compromised by big money, by its own pursuit of profits. And so, it’s a critique that only goes so far.

And then I think to kind of point his attention or point our attention or direct our attention to the question of Israel and Palestine, the issues around the DREAMers, issues around race or continued inequality, the issues around LGBTQ—right?—communities, I think, was important as a way of, in some ways, framing his own presidency over and against what is to come. But I have this fear, though, Sister Amy, that he’s positioning himself as, in some ways, the voice of a kind of resistance post his presidency. And I worry about that because of—because of his containing and limiting voice, you know, because President Obama, at the end of the day, is just simply a centrist liberal.

AMY GOODMAN: During his press conference, President Obama criticized the voting restrictions in place in the United States.

PRESIDENT BARACK OBAMA: We are the only country in the advanced world that makes it harder to vote rather than easier. And that dates back. There is a—there is an ugly history to that, that we should not be shy about talking about.

PRESIDENT BARACK OBAMA: Yes, I’m talking about voting rights. The reason that we are the only country among advanced democracies that makes it harder to vote is—it traces directly back to Jim Crow and the legacy of slavery, and it became sort of acceptable to restrict the franchise.

PRESIDENT BARACK OBAMA: This whole notion of election—or, voting fraud, this is something that has constantly been disproved. This—this is fake news, the notion that there are a whole bunch of people out there who are going out there and are not eligible to vote and want to vote. We have the opposite problem: We have a whole bunch of people who are eligible to vote who don’t vote.

EDDIE GLAUDE: [inaudible] But again—again, I think his analysis is limited. I mean, to the extent to which the question of voter fraud or voter suppression, tracing its origins back to Jim Crow and slavery, giving it—giving attention to its racial underpinnings is right. But there’s a reluctance, though, to speak to voter suppression—right?—the ways in which voter ID laws are directly targeting black communities, what happened in North Carolina, what happened in Wisconsin, what happens—what tried to happen—what Texas tried to do, what Pennsylvania attempted to do. And to speak specifically to the ways in which race, and particularly the way black and brown communities are targeted today, there’s a reluctance. So, in other words, you get this kind of general claim about an assault on voting rights, that we’re making it more difficult for people to vote, tracing it specifically to Jim Crow and the institution of slavery, but a reluctance to name specifically the ways in which Republicans across the country have targeted black and brown voters in very distinct ways. I mean, the court was very clear in North Carolina, what North Carolina Republicans were doing. And instead, at this point, instead of making that move—and again, I want to begin by saying he’s right to give the historical backdrop to the question of trying to limit voting in the United States, but instead of kind of pointing our attention to what specifically is happening around race, and particularly with regards to people of color, today, he wants to say that people have the right to vote, but they don’t vote. Right? So it’s a kind of, again, on the one hand and then on the other, without him really going to the core of the problem.

PRESIDENT BARACK OBAMA: I worry about inequality, because I think that if we are not investing in making sure everybody plays a role in this economy, the economy will not grow as fast, and I think it will also lead to further and further separation between us as Americans, and not just along racial lines. I mean, there are a whole bunch of folks who voted for the president-elect because they feel forgotten and disenfranchised. They feel as if they’re being looked down on. They feel as if their kids aren’t going to have the same opportunities as they did.

AMY GOODMAN: Professor Eddie Glaude, if you could comment on what he’s saying and also where we have been and where we’re headed?

EDDIE GLAUDE: Well, look, it’s one thing for President Obama to point to increasing inequality in the country, and it’s another thing for us to look at his policies. When we look at over the last—when we kind of assess the last eight years, what we’ve seen is that you’ve had a series of policies that really have benefited Wall Street and left Main Street behind. We have a policy that is, in some ways, fit—it fits perfectly with the increasing financialization of our economy, that’s really tailored for the top 1 percent and top 0.01 percent. And there’s kind of modest gains for everyday, ordinary people working. Even if they tout job creation, we know, from one of my colleagues here at Princeton, that 95 percent of the jobs created over the last 15-plus years have been part-time and contractual work. So people are working harder and earning less. So, there’s one thing to point to inequality, but there’s another thing to kind of look to the policies that he has supported and pushed that’s produced inequality. That’s the first thing.

And the second thing—the second move that we have to kind of be very, very careful about is the way in which he always engages in this equivalency. Right? We have to pay attention to the fact that there are some white voters out there who voted for Donald Trump who are catching hell. Of course there are white voters out there who have lost ground, who have suffered in this economy. But at the same time, we have to be mindful that 53 percent of black wealth over the last eight years has just simply been wiped off the planet. It’s gone. And it has a lot to do with housing policy, has a lot to do with his failure over the last eight years to really address the racialized dimensions of the housing crisis. And so, I really want us to say that he’s right to point to inequality, but I’m not sure he’s the right messenger to point to inequality, if that makes sense.

Now, where do we—where are we now, and where are we going? Well, we have deepening racial inequality. We have deepening economic inequality. We have a neo-fascist who is about to be inaugurated. We have the billionaires and millionaires who are about to take over government. What we are in, in some ways, is a conjunctural moment where crisis opens up space for us to put forward a more progressive vision of what this country could and ought to be. So we need to prepare ourselves for day one, as Donald Trump ascends, and attack the policies that, in some ways, Barack Obama’s administration, Clintonism broadly, has made possible. 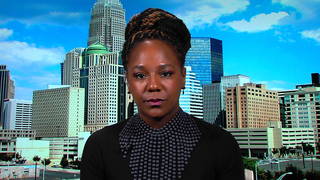