JUAN CARLOS DÁVILA: It was a rainy Women’s March in San Francisco, which began with a rally at the Civic Center, where women leaders, activists, artists and organizers addressed the crowd. Among them was Malkia Cyril, director of the Center for Media Justice.

MALKIA CYRIL: On January 20th, 2017, a new form of white supremacy, misogyny and economic tyranny took up residency at the White House and in our Congress. We call that neofascism, and we’re not here for it. I’m afraid, because I’m black, because the form of white supremacy that just took office didn’t start today. It was built by history, by a transatlantic slave trade, by Black Codes and Jim Crow, by lynching and structural racism that turned black women’s bodies into tools, one that we fight hard to reclaim every day. But solidarity, like what you see today, requires risk. It requires that we trust women, that we trust black, Muslim, Native, migrant, poor, queer and trans leadership. I didn’t come here to be in a parade. We can parade when we win. Until then, let’s protest. Until then, let’s fight. Until, let’s resist and say black lives matter!

JUAN CARLOS DÁVILA: At the rally, speakers discussed Islamophobia and xenophobia. This is Ameena Jandali, founding member of the Islamic Networks Group.

AMEENA JANDALI: We need to realize that Islamophobia did not start with this administration, or even on 9/11, but has deep roots that go back to Hollywood and the media and a culture that has focused for decades and centuries on demonizing and vilifying Arabs and Muslims. And xenophobia is not new in this country. We have seen far too many of these episodes, from the earliest days with the Native Americans, who are the original Americans, to the blacks, who were brought here in chains, to the Irish, who were called non-white, the Italians, the Catholics, who it was feared they would take over the White House, and here on the West Coast, the shameful history of anti-Chinese exclusion and Japanese internment. And so, Muslims, Hispanics and others are in the last group of hazing. We hope and pray that we will be the last group. With your help, we will, together, make America great again for all of its diverse people. Thank you very much. Assalamu alaikum.

JUAN CARLOS DÁVILA: Jane Kim, the first Korean-American elected official in San Francisco, gave the last speech. Kim emphasized that San Francisco and California have historically been beacons of change in the nation.

JOAN BAEZ: [singing] May God bless and keep you always
May your wishes all come true
May you always do for others
And let others do for you

Joan Baez, and I came today because it was the righteous thing to do. And I think I have a message which—I have a lot of them, you know. This one is, if you have to refer to Trump in any capacity, remember to refer to him as minority president—you know, the one who lost.

PROTESTERS: We don’t need him, need him! Back up! Back up! We want freedom, freedom! Tell that racist Donald Trump…

LAUREN STRALO: Hi. My name is Lauren Stralo [phon.], and I’m a designer. I just really am enjoying the moment, and I really feel great to be around all these other people that are supporting each other. And whether you’re a part of this movement or not, I hope that everyone chooses love and support. And that’s what’s great.

STEVEN: My name is Steven. I work in Palo Alto. I’m all for women’s rights. And I am not for the Trump, you know, presidency. So, that’s why I’m here. It’s awesome! It feels like a sports event. You know, like I’ve never heard this street being so loud. Even the Giants parades are not this—I’ve never seen so many people, yeah, over here, so…

NATASHA TAMATE WEISS: My name is Natasha Tamate Weiss. I was born and raised in San Francisco. I’m a filmmaker and poet. I think it’s incredibly important that we’re building unity and that we’re building a sense of common purpose and common language. I think—I hope that people are talking to each other and educating one another, because, really, we need to rethink the entire way that we’re engaging as a country. It’s not just about the Trump administration. It’s also about ways that all of us are complicit in violence that is targeting low-income communities of color.

KARTIK RAMANATHAN: My name is Kartik Ramanathan. I’m a software engineer. I work in the—I work in the city of San Francisco. I’ve called America home for over 14 years. I came here as a student. I’m originally from India. And it’s very dangerous to have a leader like this, because, particularly, it sends a—it sends a negative, regressive message to countries around the world, including countries like India. We need to build on this movement, and we need to continue to do this, particularly for—not only for the women and for the immigrants, but also for the environment. It’s about the survival of our species. If we let them drill for oil and if we let them blast the coal out of all the mountains, we will not have much of a future left for our whole species. 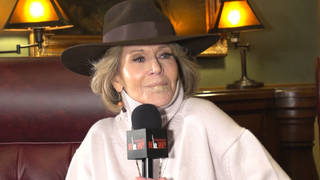