Will the NRA Use Regulation of “Bump Stocks” as Excuse to Avoid “Real Action” on Gun Control?

On Thursday, the National Rifle Association said it would support additional regulation on the gun accessory known as “bump stocks.” Investigators believe the device was used in Sunday night’s mass shooting in Las Vegas, in which Stephen Paddock, a 64-year-old white man, killed 59 people, including himself, and injured nearly 500 people. Authorities say Paddock bought at least 12 bump stocks, which allow semi-automatic rifles to act like machine guns, capable of firing hundreds of rounds a minute. But many say the “bump stocks” regulations do not go far enough to prevent future mass shootings. We go to Las Vegas, where we are joined by Annette Magnus-Marquart, executive director of the Nevada-based Battle Born Progress, which advocates for gun control.

AMY GOODMAN: On Thursday, the National Rifle Association said it would support additional regulation on the gun accessory known as bump stocks. Investigators believe the devise was used in Sunday night’s mass shooting in Las Vegas, in which Stephen Paddock, the 64-year-old white man who killed killed 59 people, including himself, and injured at least 500 people. Authorities say Paddock bought at least 12 bump stocks, which allow semi-automatic rifles to act like machine guns, capable of firing hundreds of rounds a minute.

The NRA’s Wayne LaPierre and Chris Cox issued a joint statement Thursday, writing, quote, “Despite the fact that the Obama administration approved the sale of bump fire stocks on at least two occasions, the National Rifle Association is calling on the Bureau of Alcohol, Tobacco, Firearms and Explosives (BATFE) to immediately review whether these devices comply with federal law. The NRA believes that devices designed to allow semi-automatic rifles to function like fully-automatic rifles should be subject to additional regulations,” they said.

But many say the “bump stocks” regulation doesn’t go near far enough to prevent future mass shootings. Legislators are now introducing a bill to deal with bump stocks, but many are saying that Congress must go far further.

We go to Las Vegas, where we’re joined by Annette Magnus-Marquart. She’s executive director of the Nevada-based Battle Born Progress.

Annette, welcome to Democracy Now! I’m so sorry what has happened in Las Vegas, what has happened in your city, this mass killing, the single-largest one by a lone gunman in U.S. history. Can you talk about what the NRA is doing? Rarely has it ever said it would do anything, but, clearly, the pressure is so enormous, they are saying, “OK, let’s deal with this one thing.”

ANNETTE MAGNUS-MARQUART: Yeah, and thank you for that. And it’s been a terrible week in Las Vegas, and so, you know, I appreciate being on.

We’re happy to see that, you know, many of the legislators, including some of the ones here in Nevada, Congresswoman Dina Titus and various others, are supporting these regulations and moving forward with regulations to limit bump stocks, because that is part of the reason why this massacre occurred. However, we believe that this is going to then become an excuse for the NRA not to go further on this.

At the end of the day, what we really need to do is real substantive gun violence prevention policy. And the bump stock issue is a very important part of that conversation, and we’re very appreciative of that; however, we also know the NRA, and we know their tactics. This is a political move on the part of the NRA to not have to go further for real gun violence prevention measures. And we know that they’re going to use this now as an excuse to say, “Look, we gave you something. We’re not totally against everything. And let’s move forward with this so we don’t have to take real action on gun violence.” And so, for me, as an advocate, as somebody who’s fighting for this every single day, you know, we want to see these bump stocks be taken out of commission; however, we also want to see real gun violence prevention legislation move forward, both at the state level and nationally.

AMY GOODMAN: You own a gun, Annette?

ANNETTE MAGNUS-MARQUART: I do own a gun, yes.

AMY GOODMAN: So, I wanted to ask you about bump stocks, whether or not it’s regulated, and the NRA wants it to be done through the Bureau of Alcohol, Tobacco and Firearms, so it doesn’t go to Congress and they’re not voting on it. About what’s happening in Nevada, I mean, it’s not like he just used bump stocks. Stephen Paddock was able to stockpile dozens of firearms, something like 33, buying from four different states. Nevada passed legislation on background checks, but it’s being held up by the state attorney general, Adam Laxalt?

ANNETTE MAGNUS-MARQUART: That’s exactly right. So, I am a gun owner. We own a handgun. We don’t own 33 weapons, unlike this terrorist did. And, you know, what we believe, as gun owners, as responsible gun owners, is that there needs to be legislation in place to make it harder for people who shouldn’t own weapons to own weapons.

And so, for me, Question 1 is a great example of that, our background check initiative, which passed. Nevada voters passed that in November of 2016. And Adam Laxalt, who’s now running for governor, is one of the NRA’s darlings, is refusing to implement that law, even though Nevada voters, the will of the people, put that forward and passed it.

And so, there’s commonsense solutions that we could be putting forward, both at—like I said, at the state level and at the national level, that would make a huge difference in our gun laws and make it—make sure that people who should not own weapons do not own weapons. And again, as a responsible gun owner, it’s my responsibility to go out there and say, “We want these gun laws passed. We want better gun laws in this country,” because, obviously, something is wrong that we continue to have mass shooting after mass shooting, over and over and over again, and now it’s happened in my own backyard.

AMY GOODMAN: President Trump hasn’t signed off on much major legislation, but one of his first moves was to sign off on legislation that makes it easier for mentally disabled people to get weapons more easy. And he continually talked about Paddock as a—you know, as a mentally defective man, a mentally demented man.

ANNETTE MAGNUS-MARQUART: Well, yeah, that’s exactly right. You know, the Congress, early this year, one of the first pieces of legislation—

AMY GOODMAN: I think we lost Annette, but we will continue that discussion next week. Annette Magnus-Marquart, executive director of the Nevada-based Battle Born Progress, speaking to us from Las Vegas. 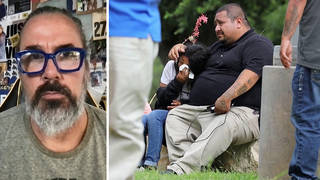