More than 40 graduate student walkouts are planned across the country today to protest a measure tucked into the budget bill that passed the House earlier this month that amounts to a pay cut of thousands of dollars for graduate students by reclassifying their tuition waivers as taxable income. Opponents say the move could diminish the number of students who will even consider graduate school, and hurt the chances of finishing for current students. We speak with Jenna Freudenburg, a fourth-year graduate student in astronomy at Ohio State University and an organizer with the Save Graduate Education movement.

JUAN GONZÁLEZ: Well, today, there are 44 graduate student walkouts planned around the country to protest a measure that is tucked away in the budget that passed the House earlier this month. That measure would amount to a pay cut of thousands of dollars for graduate students by reclassifying their tuition waivers as taxable income.

AMY GOODMAN: Students say the move could diminish the number of students who will even consider graduate school, and hurt the chances for current students of finishing, impacting critical research.

For more, we’re joined from Hilliard, Ohio, by Jenna Freudenburg, a fourth-year graduate student in astronomy at Ohio State University, an organizer with the Save Graduate Education movement, who is joining Heather McGhee in this discussion.

Jenna, welcome to Democracy Now! Explain exactly what is in the House bill.

JENNA FREUDENBURG: Thanks for having me.

Yes, so, the particular provision in the House bill that concerns graduate students the most is this provision that would reclassify our tuition waivers and tuition reductions as taxable income. The way that graduate education, especially for those of us pursuing Ph.D.s, has proceeded in this country for many years is that we provide research and teaching services as part of our work as graduate students, and in exchange for that, we receive usually quite modest stipends, and we receive tuition waivers, because universities recognize it’s not economical for students to go into debt or to be unable to support themselves while they complete their Ph.D.s. So, this is the way it’s been for quite a while.

Under these new provisions, the waivers and the reductions that we receive in tuition would be taxed. And this would result in tax increases of hundreds and hundreds of percent, even for public university students. The situation is even more dire for students at private universities, where the tuition is higher. So this is the particular provision we are most concerned about.

However, this is just one of a number of troubling provisions in both the House and the Senate versions of the bill that target higher education. For example, under one of the versions of the bill, we would no longer be able to deduct our student loan interest payments from our taxes. The Lifetime Learning Credit is going to be eliminated. And as you were discussing earlier, the state and local tax deductions are going to be eliminated, which are a major way that states are incentivized to provide funding for their public higher education systems. So this really is an assault on higher education, and it’s something that graduate students in particular are finding very concerning.

AMY GOODMAN: What are your plans today?

JENNA FREUDENBURG: So, today we have about 50 universities at this point that have organized their own grassroots actions to protest this bill. At my university, Ohio State, we’re actually hosting a teach-in and a grade-in, where we are going to be publicly performing our work as academic laborers. We’re going to be grading. We’re going to be doing our research. And we’re going to be hearing from our colleagues about how this tax bill will affect them.

At other universities, students are staging walkouts out of their classrooms. Students are holding rallies on their campus quads. Students are holding phone-banking sessions to contact their local lawmakers. So we have a whole wide variety of grassroots actions. And we’ve decided to band together and hold all of those actions on the same day to send the message, as this bill progresses through Congress, that it would be terrible for grad students, terrible for higher education, and we strongly oppose it and urge our lawmakers to vote against it.

JUAN GONZÁLEZ: And have you been able to identify any particular lawmakers, especially, let’s say, in the Senate, who might be open to pressure by students across the country or in particular states?

JENNA FREUDENBURG: Well, it’s a bit of a tricky one in the Senate, because the Senate version of the bill does not have this particular provision that we’ve been discussing that would tax our tuition waivers. That particular provision is in the House version of the bill, and we’ve identified some lawmakers in the House that we’ve been trying to pressure. For example, Senator Pat Tiberi, who is the representative for the Ohio 12th District near Columbus here, is on the House Ways and Means Committee. He had a major hand in crafting this bill and will be instrumental in any future changes that might have to occur as part of a reconciliation process, should this bill proceed through the Senate.

So, we’re seeking public commitments from him, from other local Central Ohio lawmakers, for my group, and for other local lawmakers for the other schools who are protesting today, as well as from our senators, that they will publicly commit to opposing any version of the bill that attacks higher education in this way.

AMY GOODMAN: So, Heather McGhee, what is gained by this? And the profound effect this will have on education—I mean, schools across the country could lose half their graduate students, who simply cannot afford to do this anymore.

HEATHER McGHEE: We have seen, over the past decade, really, an increasing campaign by the right-wing media to demonize higher education. And if you think about what are the sources of progressive values and power, they are labor unions, they are the government itself, the idea of a public good itself, and they are higher education. Republicans know that as you get more educated, you are more likely to hold progressive values and vote for a Democrat.

I think this is very clearly part of a campaign to make college the enemy, to make higher education no longer the route to upward mobility that it has been. And there is no reason, in an economy where getting a bachelor’s degree is now the ticket to a middle-class job—which it shouldn’t be, right? Working-class jobs shouldn’t be poverty jobs. We should have strong unions and high labor standards, so that you don’t have to go to college to get a degree. But that’s what the conservative economic system has created. And now they want to make that degree even more out of reach.

One thing I did want to say, I think that the walkouts and the protests that Jenna and her colleagues are organizing are amazing. And we do still have some opportunity to kill this bill.

JUAN GONZÁLEZ: That’s what I wanted to ask you about.

JUAN GONZÁLEZ: What can be done with this steamroller? Despite what public opinion is, the Republican majority and the president seem determined to get a bill passed in the next couple of weeks.

JUAN GONZÁLEZ: And then, of course, the reconciliation of two bad bills—

JUAN GONZÁLEZ: —will then begin. What can people who want to stop this do?

HEATHER McGHEE: So, I would recommend that people go to a source like Indivisible.org, that really gives excellent calling tools for you to be able to call your senator. Obviously, if you are in the states of Maine, Tennessee, Arizona, Oklahoma, Kansas, Wisconsin or Montana, those are the places where Republicans have been on the fence for various reasons. After the press conference yesterday and the meeting with Donald Trump, a few of them said, “I might be more willing to vote for the bill.” But until they’ve actually done that roll call vote, people should be calling in, including to their Democratic senators, to make the impression very clear on the Hill that the American people are watching, because they know this is unpopular. 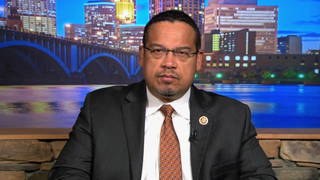