Oral arguments are scheduled for next week in both federal appeals court cases of President Trump’s proposed travel ban, which blocks various people from eight countries, six of them with Muslim majorities, from entering the United States. Mehdi Hasan, award-winning British journalist and broadcaster at Al Jazeera English, discusses the impact Trump’s recent retweets of Islamophobic messages and videos could have on the cases, and notes, “This is the way he’s always been.”

AMY GOODMAN: Finally, Mehdi Hasan, we wanted to turn to the issue of Trump’s proposed travel ban, which blocks various people from eight countries, six of them with Muslim majorities, from entering the United States. But federal judges in Maryland and Hawaii have partially blocked its implementation. Oral arguments are scheduled for next week in both federal appeals court cases. Neal Katyal, a lawyer on the Hawaii travel ban case, posted a link to news coverage Wednesday of the president’s tweets, writing, quote, “Thanks! See you in court next week.”

What impact do you think Trump’s retweets of these videos, that have been so widely condemned, across the political spectrum, will have on his attempt to enforce this third iteration of a travel ban, what many call a Muslim ban?

MEHDI HASAN: It’s a very good point, Amy. And every judge who has looked at this since January, when the first version of the Muslim ban came out, has actually referred to Trump’s tweets, Trump’s statements during the campaign, to point out that when the Trump administration says this has nothing to do with religion or Islam, hold on, the president of the United States himself said, either in office, on Twitter or on the campaign trail, that it is to do with Islam, it is to do with Muslims.

So, when the White House next lies and says this has nothing to do with Muslims, their own administration keeps undermining them by keep—you know, occasionally, accidentally, the most dishonest administration in modern history tells the truth.

AMY GOODMAN: —once again talking about President Obama being illegitimate, that he wasn’t born in the United States, saying that perhaps the Access Hollywood video in fact wasn’t real, wasn’t his voice, even though he acknowledged it and apologized for it.

AMY GOODMAN: And then, last night, when talking about the tax plan, reading script that said something like rocket fuel for the economy, got inspired to say, “Oh, by the way, rocket fuel, rocket man,” and then called the North Korean leader “a sick puppy.” All of this is happening in the midst of this major escalation—

AMY GOODMAN: —with North Korea that could lead to a nuclear war, as he attacks his closest ally, the British prime minister, Theresa May—

AMY GOODMAN: —who he might need in this case. What about this, this most unstable time?

MEHDI HASAN: I mean, I think the main way to deal with Trump, to try and respond to Trump, is to stop being surprised. We have to—I know it is hard for us to stop being shocked, because he’s so—he’s so good at shocking us. But I think we have to try and stop being shocked, if we’re going to tackle the menace that he poses to global stability and peace, because, look, you know, he said he was a conspiracy theorist during the campaign. He went on Infowars and thanked Alex Jones. He told us he was a conspiracy theorist. We shouldn’t be shocked when he’s a conspiracy theorist in office. He told us he was a white nationalist on the campaign trail. He retweeted accounts like White Genocide when he was a candidate. So we shouldn’t be shocked when he becomes president and starts promoting white nationalists on Twitter.

This is who he has always been—dangerous, unstable, a white nationalist, a conspiracy theorist. It’s who he’s always been over the decades. So I’m not sure why so many journalists, especially people who go to the White House and ask these questions every day of Sarah Huckabee Sanders—you know, start from the premise that he is who he says he is. He is a white nationalist. He is a conspiracy theorist. He is unstable. Some of America’s leading psychiatrists have put together a book pointing out that he is a danger to us all because he is so unstable. And therefore we have to start recognizing what’s in front of us, and stop pretending that this is any kind of normal president. He is not.

AMY GOODMAN: Mehdi Hasan, we want to thank you for being with us, award-winning British journalist, broadcaster at Al Jazeera English, host of Al Jazeera program UpFront, columnist for The Intercept. We will link to your piece on the criticism—

AMY GOODMAN: —of Thomas Friedman’s piece in The New York Times. Also contributing editor to the New Statesman magazine in the U.K.

This is Democracy Now! When we come back, we’ll be speaking with the Nobel Prize-winning economist Joseph Stiglitz. Stay with us. 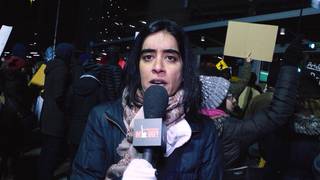