Is the U.S. Exporting Its Travel Ban with Thousands of TSA & DHS Agents in 70 Countries?

A New York Times investigation has revealed how the Department of Homeland Security is increasingly going global, with thousands of agents from the Department of Homeland Security and the Transportation Security Administration stationed in more than 70 countries around the world. Hundreds more DHS workers are deployed at sea on Coast Guard ships or in the skies on surveillance planes. Stationing ICE overseas is reportedly about four times as expensive as a domestic post. Now some countries are accusing DHS of attempting to export the United States’ restrictive immigration laws, with one German politician saying DHS’s interrogations and detentions at foreign airports constitute an extrajudicial travel ban. We speak with Ron Nixon, The New York Times’s homeland security correspondent who broke the story, “Homeland Security Goes Abroad. Not Everyone Is Grateful.”

AMY GOODMAN: We begin today’s show with a new investigation that reveals how the Department of Homeland Security is increasingly going global, with thousands of agents from the Department of Homeland Security and the Transportation Security Administration stationed in more than 70 countries around the world. Hundreds more DHS workers are deployed at sea on Coast Guard ships or in the skies on surveillance planes. Stationing ICE overseas is reportedly about four times as expensive as a domestic post. Now some countries are accusing DHS of attempting to export the United States’ restrictive immigration laws, with one German politician saying DHS’s interrogations and detentions at foreign airports constitute an extrajudicial travel ban. Andrej Hunko, a member of the Germany Left party, accused the United States of moving its immigration controls to European countries.

Well, for more, we’re joined in Washington, D.C., by the journalist who broke the story for The New York Times. Ron Nixon is The New York Times homeland security correspondent. His piece is headlined “Homeland Security Goes Abroad. Not Everyone Is Grateful.”

So, Ron, tell us what you found.

RON NIXON: Well, good morning, Amy, and thanks for having me on the show.

The article is just about the global footprint of the Department of Homeland Security. And the reason that they are going to these countries is to attack whatever threats, be they terrorist threats, be they human traffickers or human smugglers or, you know, international criminal organizations, at the source. So, they’ve stationed these people abroad.

As you mentioned, there are about 2,000, from ICE agents to TSA to Customs and Border Protection to the Secret Service, that are stationed in about 70 countries. In addition, there are people on Coast Guard cutters that are sailing around, thousands of miles away. And Customs and Border Protection, obviously, again, has these surveillance planes that fly primarily off the coast of South America and the Caribbean Sea, looking for drug smugglers.

But the biggest thing is that those are just the people that are permanently in these places. There are employees from the Department of Homeland Security who are deployed on a temporary basis and training and doing investigations and a number of other activities in these countries.

And as you mentioned, there is some pushback from some countries who feel as though that they’re a little uncomfortable with having U.S. law enforcement on their soil, and particularly some of the European countries.

AMY GOODMAN: Can you talk about—well, you just flew in from Canada earlier this morning, Ron—

AMY GOODMAN: —where more than 400 homeland security employees are stationed. In your investigation, you reported Canadians flooded their prime minister’s office in August with letters and emails protesting legislation to allow U.S. customs officers, stationed at Canadian airports and train stations, to question, search and detain Canadian citizens. Unnamed government officials told the Canadian Broadcasting Corporation the volume of mail received was unprecedented and took officials by surprise. This measure ultimately passing earlier this month?

RON NIXON: Yes. So, this was—there’s a program called preclearance that has existed in Canada since 1952. And essentially what it is is, instead of going through customs once you land in the United States, you go through customs there. So, Customs and Border Protection has customs officers stationed at Canadian airports, about eight of the—I believe it’s about eight Canadian airports. And you clear customs there, so when you land in the U.S., you’re basically a domestic passenger. Increasingly, though, this program has been seen as a counterterrorism program to stop people from coming to the U.S.A., so you don’t have to deal with them once they’re here. You deal with them abroad.

This bill in Canada—C-23 is the name of the bill that just passed. Before, if you were a Canadian citizen and you went to preclearance and you decided, “I don’t like the questioning, so I’m just going to leave,” you could just leave. And there was nothing that they could—that the customs officers, U.S. customs officers, could do. Under this new legislation, they can question you. They can even detain you. They can’t arrest you, but they can detain you, if they have something, and they can detain you until the Canadian law enforcement officials get there. So, there was—as you referenced, there was outcry from people who were saying, “Well, why are we letting U.S. law enforcement officers do this on Canadian soil to Canadian citizens?”

AMY GOODMAN: Can you talk about the number of ICE agents who are abroad?

RON NIXON: Yes. There are about 300 ICE agents that are abroad in about 50 different countries. And these are primarily people from Homeland Security Investigations, which is a part of ICE. It’s the investigative wing of ICE. And what they do is target transnational criminal organizations. They do visa security investigations for people who are applying for visas to come to the country. They will background those people, do investigations, to make sure that they are not terrorists or human smugglers. So, that’s essentially what those folks are there. Again, the purpose is to attack the problem at its source rather than waiting for it to come to the U.S.

AMY GOODMAN: The concerns about DHS agents being placed abroad, when a number are needed at ports in the United States?

AMY GOODMAN: You write about a situation in Tanzania where ICE investigators were accused in May of using Mafia-style tactics. What happened?

RON NIXON: So, there is this international drug organization that was based out of Tanzania but also operated in South Africa. And the leader of it, they sourced heroin from Pakistan and from Afghanistan, got cocaine from South America, and sold it internationally. And one of their members was caught at Houston airport—one of the Houston airports, smuggling heroin. And so, ICE has jurisdiction over any type of international crime that crosses the border. This guy who ran the organization was placed on the Treasury Department’s kingpins list. These are drug traffickers who—that the U.S. would designate kingpins and freeze their assets.

The controversy that you mentioned is that the U.S. asked, and was granted, the right of extradition to extradite this guy to—and several of his workers, to the United States to face charges. But they had an appeal before a court in Tanzania. And the attorney who represents them, and several people in Tanzania, too, accused the U.S. of just taking these guys before their appeal was actually heard.

RON NIXON: So they were extradited—

RON NIXON: —before their appeal was heard.

AMY GOODMAN: You also write about how—the concern of a number of countries that Trump is exporting his travel ban. Explain.

RON NIXON: Yeah, so, that was something that actually came up in Ireland earlier this year in one of the preclearance facilities in Europe, where an Irish citizen was not allowed to board a plane to come to the U.S. And several lawmakers there accused the U.S. of basically using their preclearance facility to enforce the travel ban that the president had signed earlier in the year. And that’s been an ongoing criticism, but it’s even more so because of the administration’s travel ban. 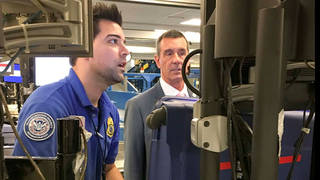