This month, Senators Mike Lee, a Republican, and Edward Markey, a Democrat, called for a halt to the expansion of a $1 billion airport facial scanning program that the Department of Homeland Security uses to identify travelers on some flights that depart from nine U.S. airports: Boston, Las Vegas, Miami, New York’s John F. Kennedy, Washington Dulles, both Houston airports, Chicago O‘Hare and Atlanta. Congress has approved the program for use on non-U.S. citizens but never expressly authorized its use on Americans. The senators also asked DHS to provide data about the accuracy of the scans and cited a study by the Center on Privacy and Technology that said the technology had high error rates and was subject to bias, because the scans often fail to properly identify women and African Americans. We speak with Ron Nixon, homeland security correspondent for The New York Times.

StoryDec 29, 2017Is the U.S. Exporting Its Travel Ban with Thousands of TSA & DHS Agents in 70 Countries?

AMY GOODMAN: Ron, I want to ask about another article you wrote, during this busy travel season. This month, Senators Mike Lee, Republican, Ed Markey, Democrat, called for a halt to the expansion of a $1 billion airport facial scanning program that the Department of Homeland Security uses to identify travelers on some flights that depart from nine U.S. airports: Boston, Las Vegas, Miami, New York’s JFK, Washington Dulles, both Houston airports, Chicago O’Hare and Atlanta. Congress has approved the program for use on non-U.S. citizens but never expressly authorized its use on Americans. In a letter to Homeland Security Secretary Kirstjen Nielsen, the senators asked for a, quote, “explanation for why DHS believes it has the authority to proceed.”

The senators also asked DHS to provide data about the accuracy of the scans, and cited a study by the Center on Privacy and Technology, that you reported on, which said the technology has high error rates and is subject to bias, because the scans often fail to properly identify women and African Americans. You cite Harrison Rudolph, an associate at the center and an author of the report, saying, quote, “It’s telling that D.H.S. cannot identify a single benefit actually resulting from airport face scans at the departure gate.”

So, explain what they are, what people experience at some of these airports, like JFK or the Houston airports.

RON NIXON: So, this program is something that has actually been law since 1996, when Congress authorized an entry-exit program. And it took on new meaning after 9/11, because two of the 9/11 hijackers overstayed their visa. So this program is to identify when people leave this country. There has been an issue with visa overstays, the people who come here and overstay their visa. And actually, most of the people who are undocumented in the country now are actually people who overstayed their visas. But because of the 9/11 hijackers and potential threats that way, Congress has authorized this program to be able to track when people leave. So, you get your visa. You come here. They track when you come. Now they know that you’re gone.

So, the issue that the center pointed out is that the facial scans that they use are also being used on Americans. And this was supposed to identify foreign nationals who are leaving, to make sure that they, again, don’t overstay their visas. The issue that CBP says is, “Well, you can’t separate out Americans from other people when they’re getting on a plane, and you do want to verify that they are indeed Americans.” But the information that—according to Customs and Border Protection, the information that they collect is used differently for Americans than it is for foreign nationals. They’re saying that once they actually identify that you are American, then that’s the end of it. They don’t keep any additional data on you. But what the center says in their report that you reference is that, well, Congress never authorized them to actually do facial scanning of American citizens, and there has not been a—they have not gone through a rulemaking process laying out what they do with this data or—and that’s the real issue there, that there has not been any rulemaking on this. So, they don’t know what CBP actually does with this information that they collect.

AMY GOODMAN: An executive order, you report, signed in January by President Trump, calls for homeland security officials to speed up the deployment of the biometric systems at the airports. What rights do people have? And explain exactly what they look like, these biometric kind of—the system.

AMY GOODMAN: Can they say no?

RON NIXON: Well, so, right now, what CBP, Customs and Border Protection, says that you have the right to opt out, that you can actually say, “Well, I don’t want to—I don’t want to do this type of scan,” and then they will just physically look at your documents and try and verify your identity another way. What the center is saying is that, well, that’s not explicit, that they don’t tell you that, “Hey, you can opt out.” They simply put things on their website, or they will hand people these cards, but it’s not explicit saying that you can opt out.

And in terms of what they look like, some of them are simply—it’s a kiosk that is—you walk up to. You put your documents down. It scans the documents. And it snaps a photo of you, and it matches it against information that CBP has of people on that flight. The other method is that there are hand-held devices where CBP customs officers will stand there and gather biometrics. And some airlines who are partnering with them are building it into—so, when you walk up to have your ticket scanned to get on a plane, it simply snaps the photo of you there and matches it against the photos that CBP has, to, again, authenticate who you are, because the CBP contention is that biometrics information can’t be faked the way that physical paper documents can.

AMY GOODMAN: Ron Nixon, I want to thank you for being with us, New York Times homeland security correspondent, based in Washington, D.C. We’ll link to your pieces, “Homeland Security Goes Abroad. Not Everyone Is Grateful,” as well as your piece, “Facial Scans at U.S. Airports Violate Americans’ Privacy, Report Says.”

When we come back, we’ll play more of our interview with Emilio Gutiérrez Soto. He’s a Mexican journalist who’s been jailed at a detention center in El Paso with his son Oscar. He says if he’s deported to Mexico, he will be killed. Then we will talk with the Committee to Protect Journalists about the number of journalists and media workers who have been killed and imprisoned around the world this year. Stay with us.

NEXTDeportation Now on Hold for Mexican Journalist Emilio Gutiérrez Soto, But He Remains in Detention 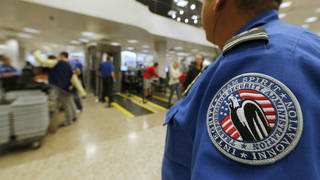 Is the U.S. Exporting Its Travel Ban with Thousands of TSA & DHS Agents in 70 Countries?