What Did Trump Know & When Did He Know It? White House in Crisis over Flynn & Russia Scandals

The Washington Post reports the White House is in “full-blown crisis” following the resignation of former National Security Adviser Michael Flynn. On Tuesday, the White House admitted that Trump knew “for weeks” Flynn had discussed sanctions in a call on December 29 with the Russian ambassador and then lied to Vice President Mike Pence and other top White House officials about it. The New York Times and CNN are now reporting phone records and intercepted calls show that members of Donald Trump’s presidential campaign had repeated contacts with senior Russian intelligence officials in the lead-up to November’s election. The Times reports U.S. law enforcement and intelligence agencies intercepted the communications around the same time they were discovering evidence that Russia was trying to disrupt the presidential election by hacking into the Democratic National Committee. Lawmakers are now calling for an investigation. For more, we’re joined by Democratic Representative Ted Lieu of California.

AMY GOODMAN: The New York Times and CNN are reporting phone records and intercepted calls show that members of Donald Trump’s presidential campaign had repeated contacts with senior Russian intelligence officials in the lead-up to the November elections. The Times reports U.S. law enforcement and intelligence agencies intercepted the communications around the same time they were discovering evidence that Russia was trying to disrupt the presidential election by hacking into the Democratic National Committee.

The New York Times and CNN published their stories Tuesday night, less than 24 hours after Trump’s national security adviser, Michael Flynn, resigned following revelations he spoke with the Russian ambassador about U.S. sanctions during a late December phone call. Former Acting Attorney General Sally Yates had warned Trump’s administration weeks ago that Flynn might be lying about the call, but the White House took no action for 17 days. Days after Yates issued the warning, Trump fired her for refusing to enforce his Muslim ban.

Michael Flynn is at least the third Trump official to reportedly have ties to Russia. Others include Trump’s former campaign chair, Paul Manafort, and former Trump adviser Carter Page. According to The New York Times, call records show Manafort was in touch with Russian officials before the election.

Hours before the Times published its exposé, White House Press Secretary Sean Spicer was questioned if anyone from the Trump campaign was in touch with Russia before the election.

JONATHAN KARL: Back in January, the president said that nobody in his campaign had been in touch with the Russians. Now, today, can you still say definitively that nobody on the Trump campaign, not even General Flynn, had any contact with the Russians before the election?

JONATHAN KARL: I’m talking about during the campaign.

PRESS SECRETARY SEAN SPICER: I don’t have any—I—there’s nothing that would conclude me that anything different has changed with respect to that time period.

JONATHAN KARL: And why would the president—if he was notified 17 days ago that Flynn had misled the vice president, other officials here, and that he was a potential threat to blackmail by the Russians, why would he be kept on for almost three weeks?

PRESS SECRETARY SEAN SPICER: Well, that’s—that’s not—that’s—that assumes a lot of things that are not true. The president was informed of this. He asked the White House counsel to review the situation. The first matter was whether there was a legal issue. And we had to review whether there was a legal issue, which the White House counsel concluded there was not, as I stated in my comments. This was an act of trust.

AMY GOODMAN: On Tuesday morning, President Trump initially responded to Michael Flynn’s resignation by tweeting, quote, “The real story here is why are there so many illegal leaks coming out of Washington? Will these leaks be happening as I deal on North Korea etc.?” Earlier today, Trump tweeted, “The fake news media is going crazy with their conspiracy theories and blind hatred. @MSNBC & @CNN are unwatchable. @foxandfriends is great!” he tweeted. He then added, “Information is being illegally given to the failing @nytimes & @washingtonpost by the intelligence community (NSA and FBI?).Just like Russia,” unquote. The pro-Trump website Breitbart.com has described the dismissal of Flynn as part of a “deep state coup.”

On Capitol Hill, Congressman Elijah Cummings, the ranking Democrat on the House Committee on Oversight and Government Reform, called for a congressional probe into Trump’s ties to Russia.

REP. ELIJAH CUMMINGS: Why did Flynn continue to sit in on most—the most sensitive classified meetings until just two days ago? Ladies and gentlemen, something is wrong with that picture. Who at the White House—and I want the press to press these questions. Who at the White House decided to do nothing for three weeks as Flynn sat in on meeting after meeting after meeting? Did the president decide to wait? Did counsel decide to wait? Something is wrong here.

AMY GOODMAN: We go now to Washington, D.C., where we’re joined by Democratic Congressman Ted Lieu of California, a member of the House Committee on Foreign Affairs, served on active duty in the U.S. Air Force and continues to serve as a colonel in the Air Force Reserves.

Congressman, welcome to Democracy Now! Your response, first of all, to the resignation, the forced resignation, of General Mike Flynn as national security adviser?

REP. TED LIEU: Well, thank you, Amy, for that question. And let me say that, America, we have a problem. The president of the United States knew for weeks that his national security adviser lied to the vice president, lied to the American people and was vulnerable to blackmail by the Russians. And the president did nothing—until the press exposed the truth a few days ago. That means the president placed the interests of Russia above that of the American people. That is not acceptable. And then we learn, last night, that Trump campaign aides had multiple contacts with Russian intelligence agents during the presidential campaign. And it’s a safe bet to say they were not talking about the weather.

AMY GOODMAN: So talk about the significance of this. Again, what the allegations are, is during the campaign, Manafort, among them, the campaign chair, didn’t just have a conversation with, but repeated contacts with. What was the significance? And what do you understand was the context for these communications?

REP. TED LIEU: We don’t know what the content of the conversations were, but the fact that they were even with Russian intelligence agents raises huge red flags. And because there were many of these contacts, that aggravates the red flags. And what this shows is there is now the possibility of collusion between the Trump campaign and the Russian government. If in fact there was collusion, that is a serious federal crime, and then it raises issues of what did Donald Trump know and when did he know it.

REP. TED LIEU: Donald Trump, according to media reports, knew for weeks, from the Department of Justice, that Michael Flynn was vulnerable to blackmail by the Russians, because he lied about the content of his conversations with the Russian ambassador when he told Vice President Pence that they did not discuss sanctions, when in fact they did. And Michael Flynn’s resignation letter essentially confirms that fact. So Donald Trump knew. You now had a U.S. national security adviser in that position who could be blackmailed by the Russians, and Donald Trump was OK with that—until a few days ago, when the press—and thank goodness for the press—exposed what had happened.

DONALD TRUMP: Russia, if you’re listening, I hope you’re able to find the 30,000 emails that are missing. I think you will probably be rewarded mightily by our press.

AMY GOODMAN: That was in July, Congressman Lieu.

REP. TED LIEU: No American should ask a foreign government to hack another American’s emails. That is completely unacceptable. And now Donald Trump is president of the United States, and we’re learning more about the contacts of his campaign with the Russian government. We absolutely need a bipartisan congressional probe. This is serious. We have a Russia that has done this huge, massive cyber-attack on the United States to influence our elections. I encourage everybody watching to go ahead and google “unclassified intelligence report,” and you will see that this unclassified intelligence report on Russia shows that they hacked our government, they hacked 20 state election boards, and they tried to undermine our democracy and help Trump and hurt Secretary Clinton. Highly disturbing.

AMY GOODMAN: President Trump is tweeting up a storm this morning. Among his tweets, “This Russian connection non-sense is merely an attempt to cover-up the many mistakes made in Hillary Clinton’s losing campaign.” Congressman Lieu, your response?

REP. TED LIEU: That is a bizarre tweet. The press doesn’t care at this point about Hillary Clinton’s campaign. What they care about is was there collusion between the Trump campaign and the Russian government, what are the connections between Trump associates and Russian intelligence agents, and what did Trump know and when did he know it, because these are very serious allegations. These are the kind of allegations that get people sent to federal prison.

AMY GOODMAN: Ted Lieu, we’re going to break and then come back to this discussion. Ted Lieu is Democratic congressman from California, member of the House Committee on Foreign Affairs , served on active duty in the U.S. Air Force and is a colonel in the Air Force Reserves. Among the things we want to talk about, actually, Yemen, as well, but also investigations by Congress, the Republican-led Congress, where would they be? What committee? Stay with us. 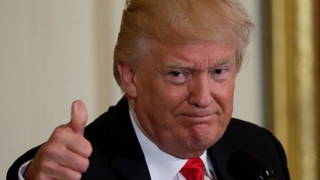