On Thursday, Donald Trump held his first solo press conference as president. He began by announcing he had nominated Alexander Acosta to be labor secretary nominee, but then soon began an extended attack on the media, accusing CNN and other outlets of peddling fake news. We air excerpts of the press conference, which went on for 77 minutes.

AMY GOODMAN: On Thursday afternoon, Donald Trump held his first solo press conference as president. Trump began by announcing he had nominated Alexander Acosta to be labor secretary nominee, but then Trump soon began an extended attack on the media, accusing CNN and other outlets of peddling fake news. The press conference went on for 77 minutes. Here are some of the excerpts of what happened.

PRESIDENT DONALD TRUMP: The press has become so dishonest that if we don’t talk about it, we are doing a tremendous disservice to the American people. Tremendous disservice. We have to talk about it. We have to find out what’s going on, because the press, honestly, is out of control. The level of dishonesty is out of control. …

As you know, our administration inherited many problems across government and across the economy. To be honest, I inherited a mess. It’s a mess, at home and abroad. A mess. …

I turn on the TV, open the newspapers, and I see stories of chaos. Chaos. Yet it is the exact opposite. This administration is running like a fine-tuned machine, despite the fact that I can’t get my Cabinet approved. …

PETER ALEXANDER: Mr. President, you said today that you had the biggest electoral margin since Ronald Reagan, with 304, 306 electoral votes. In fact, President Obama got 365 in 2008.

PETER ALEXANDER: And George H.W. Bush, 426, when he won as president. So, why should Americans trust you?

PRESIDENT DONALD TRUMP: Well, no, I was told—I was given that information. I don’t know. I was just given it. We had a very, very big margin.

PETER ALEXANDER: I guess my question is: Why should Americans trust you when you accuse the information they receive of being fake, when you’re providing information that’s not accurate?

JOHN ROBERTS: What will you do on the leaks? You have said twice today—

PRESIDENT DONALD TRUMP: Yes, we’re looking at them very, very, very seriously. I’ve gone to all of the folks in charge of the various agencies, and we’re—I’ve actually called the Justice Department to look into the leaks. Those are criminal leaks.

JONATHAN KARL: On the leaks, is it fake news, or are these real leaks?

I can handle a bad story better than anybody, as long as it’s true. And, you know, over a course of time, I’ll make mistakes, and you’ll write badly, and I’m OK with that. But I’m not OK when it is fake. I mean, I watch CNN. It’s so much anger and hatred and just the hatred.

KRISTEN WELKER: Did you direct Mike Flynn to discuss sanctions with the Russian ambassador—

PRESIDENT DONALD TRUMP: No, I didn’t.

KRISTEN WELKER: —prior to your—

PRESIDENT DONALD TRUMP: No, I didn’t.

PRESIDENT DONALD TRUMP: No, I didn’t. But Mike—

KRISTEN WELKER: But didn’t you fire him because [inaudible]—

JIM ACOSTA: You said that the leaks are real, but the news is fake. I guess I don’t understand. It seems that there’s a disconnect there. If the information coming from those leaks is real, then how can the stories be fake?

JIM ACOSTA: And if I may ask—I just want to ask one other question.

PRESIDENT DONALD TRUMP: Jim, you know what it is? Here’s the thing. The public isn’t—you know, they read newspapers. They see television. They watch. They don’t know if it’s true or false, because they’re not involved. I’m involved. I’ve been involved with this stuff all my life. But I’m involved. So I know when you’re telling the truth or when you’re not. I just see many, many untruthful things. And I’ll tell you what else I see. I see tone. You know the word “tone.” The tone is such hatred. I’m really not a bad person, by the way. No, but the tone is such—I do get good ratings. You have to admit that. The tone is such hatred. …

JON SOPEL: On the travel ban, would you accept that that was a good example of the smooth running of government—

PRESIDENT DONALD TRUMP: Yeah, I do. I do.

PRESIDENT DONALD TRUMP: Let me tell you about the travel—

JON SOPEL: Well, were there any mistakes in that?

PRESIDENT DONALD TRUMP: Wait, wait, wait. I know who you are. Just wait. Let me tell you about the travel ban. We had a very smooth rollout of the travel ban. But we had a bad court, got a bad decision. We had a court that’s been overturned—again, may be wrong, but I think it’s 80 percent of the time. A lot. We had a bad decision. We’re going to keep going with that decision. We’re going to put in a new—a new executive order next week sometime. …

REPORTER: Can you say whether you are aware that anyone who advised your campaign had contacts with Russia during the course of the election?

PRESIDENT DONALD TRUMP: Well, I told you, General Flynn, obviously, was dealing, so that’s one person. But he was dealing, as he should have been.

REPORTER: During the election?

REPORTER: So you’re not aware of any contacts during the course of the election.

PRESIDENT DONALD TRUMP: Look, look, look. How many times do I have to answer this question?

REPORTER: Can you just say yes or no on it?

JAKE TURX: What we are concerned about, and what we haven’t really heard being addressed is an uptick in anti-Semitism and how the government is planning to take care of it. There has been a report out that 48 bomb threats have been made against Jewish centers all across the country in the last couple of weeks. There are people who are committing anti-Semitic acts or threatening to—

PRESIDENT DONALD TRUMP: You see, he said he was going to ask a very simple, easy question. And it’s not.

JAKE TURX: It’s an important one.

PRESIDENT DONALD TRUMP: It’s not. Not a simple question, not a fair question. OK, sit down. I understand the rest of your question.

So here’s the story, folks. Number one, I am the least anti-Semitic person that you’ve ever seen in your entire life. Number two, racism—the least racist person. In fact, we did very well relative to other people running as a Republican.

PRESIDENT DONALD TRUMP: Quiet, quiet, quiet. See, he lied about—he was going to get up and ask a very straight, simple question. So, you know, welcome to the world of the media. …

PRESIDENT DONALD TRUMP: Am I going include who?

PRESIDENT DONALD TRUMP: Well, I would.

APRIL RYAN: —as well as on the—

PRESIDENT DONALD TRUMP: Are they friends of yours?

PRESIDENT DONALD TRUMP: No, get a—set up the meeting.

APRIL RYAN: I know some of them, but I’m sure they’re watching right now.

When we come back, President Trump vowed to “show great heart” for recipients of President Obama’s DACA program. That’s Deferred Action for Childhood [Arrivals]. So why is DREAMer Daniel Ramirez sitting in a Tacoma, Washington, jail? Next up. Stay with us.

Why Did ICE Arrest & Imprison a 23-Year-Old DREAMer and DACA Recipient Living Legally in the U.S.?

NEXTWhy Did ICE Arrest & Imprison a 23-Year-Old DREAMer and DACA Recipient Living Legally in the U.S.? 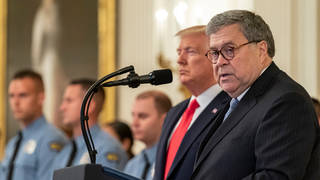