As President Trump prepares to issue a new executive order barring all refugees and visitors from seven majority-Muslim nations, we speak to Steven Goldstein, the executive director of the Anne Frank Center for Mutual Respect. He reflects back on how FDR twice denied permission for the Frank family to come to the United States as refugees to escape Nazi-occupied Amsterdam.

AMY GOODMAN: Steven Goldstein, if you could talk about the story of Anne Frank in terms of immigration to the United States.

AMY GOODMAN: This was FDR.

STEVEN GOLDSTEIN: Yes, this was FDR, roughly between the periods of 1939 to 1941. Otto Frank was actually a fairly well-connected man. He was an intelligent man with friends in high places. And he was able to get communications very high up in the Roosevelt administration, saying, “Please, save my family. Save the Frank family.” It didn’t work. FDR refused refugee Anne Frank.

So, for those of us in the Jewish community, and for those of us who are not Jewish but who simply care about never again repeating what happened to Anne Frank, when we look at the Muslim ban and we look at Syrian refugees, we say, “Let us save every future Anne Frank, that we didn’t save decades ago.” And whether this kind of evil prejudice against refugees was perpetrated by a Democrat like Franklin Roosevelt or a Republican like Donald Trump, it is an unconscionable blot on the American national conscience. That’s why, in the name of Anne Frank, we have an obligation to stand with Muslim refugees and to stand with all refugees to help them come into this nation.

AMY GOODMAN: A Texas mosque was just burned to the ground, Mark Potok, and the Jewish synagogue said, “Our building is big enough for both,” and handed the keys over of their synagogue to the Muslims in the community. Your final comment? What do you think, Mark Potok, President Trump could do to show that he’s serious about stopping these hate groups?

MARK POTOK: Well, I think he can’t do much, because the fact is, is that he is not serious about stopping them. You know, the reality is, he has stood by and said nothing, while not merely one, but three different mosques were burned to the ground in the month of January alone. You know, that is the really remarkable thing. So I think that we are put in a position—we, sort of the people of this country—

MARK POTOK: —of building intercommunal ties between Jews and Muslims and so on, and resisting at the ground.

AMY GOODMAN: We’ll have to leave it there. Mark Potok and Steven Goldstein, thanks so much for joining us. 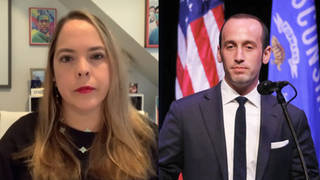