We Will Not Be Intimidated: Philly Rabbi Decries Desecration of Over 500 Graves at Jewish Cemetery

JUAN GONZÁLEZ: We go now to Philadelphia, where hundreds, as many as 500, headstones at a Jewish cemetery were toppled or damaged in the second apparent incident of vandalism at a Jewish cemetery in about a week. On Sunday, in a show of solidarity, members from the local Muslim and Quaker community joined Jewish Philadelphians at the Mount Carmel Cemetery to restore the burial grounds. The apparent vandalism at the Philadelphia and St. Louis cemeteries comes after a surge of bomb threats against Jewish community centers, or JCCs, across the country. The Southern Poverty Law Center and other groups have said hate groups have been energized by the candidacy and then the election of Donald Trump.

AMY GOODMAN: On Sunday, the Anne Frank Center for Mutual Respect put out a statement saying, quote, “Mr. President, it’s time for you to deliver a prime-time nationally televised speech, live from the Oval Office, on how you intend to combat not only #Antisemitism, but also #Islamophobia and other rising forms of hate. Whether or not your intention, your Presidency has given the oxygen of incitement to some of the most viciously hateful elements of our society,” unquote.

Rabbi Ari Lev, welcome to Democracy Now! You went out to the cemetery. Can you describe the scene?

RABBI ARI LEV FORNARI: Yeah. Thanks for having me. It’s an honor to be here.

We arrived midday yesterday around 2:00, and we were pulling up just as some media was pulling up. A group of—a small group of rabbis arrived. And as we walked the grounds, there were actually just rows upon rows of desecrated graves, tombstones actually toppled on each other, often causing the cracking of the tomb and the falling, one upon another. And one person, in his own sacred witness, actually walked the cemetery row by row and counted 539 desecrated graves.

One of the—one of the most significant moments, actually, was as we’re gathering, figuring out, you know, can we lift these graves, how many people does it take, the manager of the Quaker burial site that’s shared adjacent to the plot came and kind of showed us how to know what was recent vandalism, showed us how we can tell that this was intent and malice and not just the product of an aggressive storm. And then a Muslim man showed up, Tarek El-Messidi, who runs Celebrate Mercy, and he had a suitcase in his hand. And we said, you know, “What brings you here?” And he said, “I was on my way to the airport, and I heard what happened in my own city, and I canceled my flight and came straight to the cemetery to offer support and solidarity.”

And that was really the energy of the gathering at the cemetery yesterday, was one of tremendous community support, support across lines of faith and difference, and a feeling that we will not stand for this kind of hatred. We will not be intimidated. We will gather. And the real sacred resistance in this moment is, you know, hands together in the dirt, really rebuilding and reclaiming our dignity and our integrity as communities of faith and those targeted by this administration.

JUAN GONZÁLEZ: Is there any indication of who may be responsible? And what’s been the response of authorities in Philadelphia?

RABBI ARI LEV FORNARI: You know, there’s really no indication. There was no graffiti. There were no markings. There was just, you know, tremendous violence against the stones themselves. And in the time that I was there yesterday, you know, for the vast majority of the day, there was no real police presence, although I know the police have been notified. And the manager of the cemetery is also, I think, handling the path forward and the question of liability and who will be the ones to actually restore and repair the graves. Even just this morning, I got a call from, you know, local masons and unions and people who want to help and actually do the physical labor and be part of the restoration.

AMY GOODMAN: You know, this cooperation has been amazing.

Rev. William Barber on the “Season of Hate & Political Violence” Under Trump

NEXTRev. William Barber on the “Season of Hate & Political Violence” Under Trump 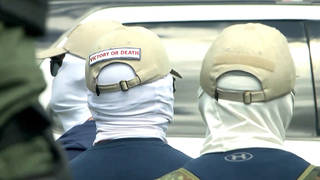