Rev. William Barber on the “Season of Hate & Political Violence” Under Trump

The Southern Poverty Law Center recently revealed the number of hate groups in the United States has tripled in the past year in part due to Donald Trump’s candidacy and election. Rev. William Barber of the NAACP in North Carolina responds to the rising hate across the country.

AMY GOODMAN: And I wanted to bring Reverend Barber back into this conversation, head of the NAACP of North Carolina, on the desecration of religious sites. Right outside of Houston in Texas, you had the mosque burned to the ground. The local Jewish synagogue handed the keys over of their synagogue to the Muslim worshipers to say, “Use our building.” You have MPower, the Muslim group led by Linda Sarsour, raising—what was it? Over $100,000, when she heard about the Missouri vandalism at the Jewish cemetery, for restoring that cemetery. Reverend Barber, what about these attacks? And what about what the Anne Frank Center said—whether President Trump is actively encouraging this, he’s got to make a national statement against this? I don’t think he’s tweeted about this recent cemetery attack. It took a long time on the Missouri one. He finally spoke at the African American museum in Washington, reading a statement, after tremendous outcry from folks of all different religious persuasions.

REV. WILLIAM BARBER: Yes. You know, Linda Sarsour is one of my good friends. And just a few weeks ago, as I said, we had thousands of people in the street. We were marching together—Jewish, Muslim, Christian, Sikh. We have to hold one another together. One of the actors said last night we have to exhume the stories of people that have died. And what that means is we have to call to memory people like Rabbi Heschel and Dr. King and others and Gandhi, who will remind us of how ugly hate and violence is. Hate and violence poisons the whole system.

And our president has been a polluter. He’s been a poisoner of the system, whether it was the hate that was embedded in his birtherism claims, the hate that he has shown toward Mexicans in naming them rapists and criminals, the hate he has shown toward Muslims and refugees. But it’s not just President Trump. All of those who said nothing when he was pushing his birtherism hate, when he was pushing his Mexican hate, those like Ryan, who called his policies classic racism but then turned around and support a person that you just said is a racist. And so, we have—we have seen it in so many ways. And then, in addition to that, and we’re seeing this violent political, violent policies. You know, Coretta Scott King once talked about denying people healthcare was a form of violence. And what are we seeing today? We’re seeing this attack on the poor, attack on immigrants. We’re seeing attack on people that need healthcare. It’s been attack, attack, attack, attack.

And what our president has done, President Trump has done, is he’s spent more time tweeting and hurting and denying and lying and spreading hate than he has spent standing up and being a statesman, and not only making statements, because even at the—even at the African American museum, he was there, and he said that the museum could heal our division, not change in policies. He was at the museum talking about healing, while his administration is lying about voter suppression and lying about voter fraud and not restoring the Voting Rights Act. So we’re in a season of hate and a season of political violence. And we who believe in love and justice must challenge it and must challenge him, as well as all others who are standing on the sidelines and allowing these things to happen without a word, and certainly without the works of love and justice.

JUAN GONZÁLEZ: I wanted to ask Rabbi Ari Lev Fornari, the—President Trump did make a statement last week against anti-Semitism. What was your reaction to that statement? And what do you feel, if anything, is his responsibility, as we’re seeing this increase in attacks, anti-Semitic attacks, around the country?

RABBI ARI LEV FORNARI: Yeah, certainly, we see this rise as part of, in this case, the tactic of the state and, seemingly, the agenda of this administration to intimidate and fear. And the appointment of Jeff Sessions and Bannon make it clear that whether or not he makes a statement, his words and his actions are incongruent with one another. And it’s our responsibility to create a sense of collective safety and support each other and show up for each other. And in the spirit of Heschel, as Reverend Barber was saying, you know, real prayer is the overturning of the callousness, of hatred and oppression and injustice anywhere. And that’s what this will be, our rising against this administration and against those who have been emboldened to act out of white supremacy. We will rise against it, and our prayer will be to overturn that and to come together and build greater relationships and greater coalitions for real justice in this country.

RABBI ARI LEV FORNARI: Yeah. In fact, actually, Kol Tzedek Synagogue in West Philadelphia joined the New Sanctuary Movement here in Philadelphia. And it’s my understanding that four other synagogues in the last several months have joined the New Sanctuary Movement. And we have an organizing body, and over 500 people in Philadelphia have been trained in their new campaign, Sanctuary in the Streets, and including dozens of my own congregants here in Philadelphia. And we’ve unfortunately had the opportunity to offer rapid response and witness in solidarity and figure out ways that we can mobilize in support of immigrant communities, of which we are a part, of which there’s members in our own community. You know, we have a large multifaith community, many members in interfaith relationships. So, the Muslim community is directly part of our community, and immigrant communities are directly part of our community. And we stand with them in solidarity and also as them.

AMY GOODMAN: Very quickly, finally, when asked about anti-Semitism, when he cuts off questions at news conferences, he often refers to his family, Jared Kushner, his son-in-law, and, of course, his daughter, Ivanka, who converted to Judaism when she married Jared Kushner. Your response when he says you can’t get someone less anti-Semitic than me?

RABBI ARI LEV FORNARI: You know, the term “anti-Semitism” has been exploited for all sorts of imperialist projects. And when I—when I hear that, you know, I feel a lot of shame and disgrace for the way they’re standing in that Judaism. And I believe that Judaism is committed to the liberation of all people and is a spiritual practice that is meant to, you know, open our hearts and increase compassion and justice in this world. And we all claim our own spiritual practice and our own spiritual traditions, and I claim it very differently than Jared Kushner does. And, you know, I stand in opposition to this administration and to the ways that it may exploit Judaism for its own purposes.

AMY GOODMAN: We want to thank you for joining us, Rabbi Ari Lev Fornari of the Kol Tzedek Synagogue in West Philadelphia, also to Reverend William Barber at the NAACP North Carolina. This is Democracy Now! 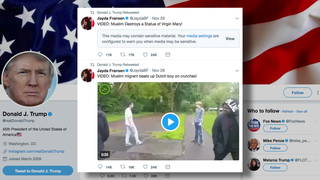