During his speech before Congress on Tuesday night, Donald Trump called on Congress to address the “imploding Obamacare disaster.” “Tonight, I am also calling on this Congress to repeal and replace Obamacare with reforms that expand choice, increase access, lower costs and at the same time provide better healthcare,” Trump said. “Mandating every American to buy government-approved health insurance was never the right solution for America.” We speak to Ola Ojewumi, a disabled 26-year-old community activist who attended Trump’s speech as a guest of Maryland Congressmember Steny Hoyer, as someone affected by the Affordable Care Act. She is a cancer survivor who has also had a kidney and heart transplant.

AMY GOODMAN: During his speech before the joint session of Congress Tuesday night, President Trump called on Congress to address the, quote, “imploding Obamacare disaster.”

PRESIDENT DONALD TRUMP: Tonight I am also calling on this Congress to repeal and replace Obamacare with reforms that expand choice, increase access, lower costs and at the same time provide better healthcare. Mandating every American to buy government-approved health insurance was never the right solution for our country.

AMY GOODMAN: We’re joined right now by Ola Ojewumi, who is a community organizer and founder of Project ASCEND, which provides opportunities to local income [sic] and disabled students—to lower-income students. She attended the joint session of Congress last night as a guest of Maryland Congressman Steny Hoyer, as someone who was affected deeply by the Affordable Care Act. Can you respond to what President Trump said last night, what it was like to be in the room, and your thoughts?

OLA OJEWUMI: It was wonderful to be in the room, but it was quite scary when I heard his comments about the Affordable Care Act. I personally was affected. I am the survivor of a heart and kidney transplant. And I was able to receive insurance and stay on my parents’ insurance until I was 26, and I received cancer treatment and became a cancer survivor this year.

AMY GOODMAN: Something that President Trump didn’t mention last night was Planned Parenthood, but it’s clearly at the target end of Republican policy right now. You know, the new head of—among other examples—of the Department of Health and Human Services, [Price], is one of the leaders to defund Planned Parenthood. Your thoughts on this, Ola? 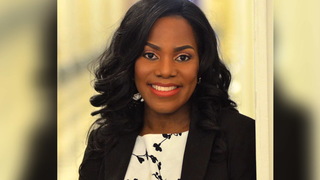