Confirmation hearings begin today for Neil Gorsuch, President Trump’s pick to replace the late Justice Antonin Scalia on the Supreme Court. If confirmed by the Senate, Gorsuch would give conservatives a narrow 5-4 majority on the court. When he was first nominated, Gorsuch praised Antonin Scalia. As a judge on the 10th Circuit, Neil Gorsuch ruled in favor of Hobby Lobby in the case deciding whether the company could refuse to provide birth control coverage to employees as required by Obamacare. Judge Gorsuch also has a long history of ruling against employees in cases involving federal race, sex, age, disability and political discrimination and retaliation claims. For more, we speak with Fordham law professor Zephyr Teachout. She recently ran for a congressional seat in upstate New York. Her recent piece for The Washington Post is headlined “Neil Gorsuch sides with big business, big donors and big bosses.”

JUAN GONZÁLEZ: Confirmation hearings begin today for Neil Gorsuch, President Trump’s pick to replace the late Justice Antonin Scalia on the Supreme Court. There’s been a vacant seat on the court for over a year following Scalia’s death on February 13th, 2016. President Obama nominated Merrick Garland to replace Scalia, but Republicans refused to even hold hearings, fearing that Garland would tip the ideological balance of the court to the left. Once Donald Trump took office, he quickly moved to nominate Gorsuch, a 49-year-old federal judge on the 10th Circuit with deep ties to the conservative movement. If confirmed by the Senate, Gorsuch would give conservatives a narrow 5-to-4 majority on the court. When he was first nominated, he praised Antonin Scalia.

JUDGE NEIL GORSUCH: Justice Scalia was a lion of the law. Agree or disagree with him, all of his colleagues on the bench cherished his wisdom and his humor. And like them, I miss him.

AMY GOODMAN: As a judge on the 10th Circuit, Judge Gorsuch ruled in favor of Hobby Lobby in the case deciding whether the company should refuse—could refuse to provide birth control coverage to employees as required by Obamacare. Judge Gorsuch also has a long history of ruling against employees in cases involving federal race, sex, age, disability and political discrimination and retaliation claims. Gorsuch is a member of the Federalist Society and has close ties to conservative Colorado billionaire Philip Anschutz, who owns The Weekly Standard and the Washington Examiner. Gorsuch also comes from a deeply conservative family. His mother, Anne Gorsuch Burford, briefly served as President Reagan’s EPA administrator, where she slashed staff and eviscerated anti-pollution regulations before resigning amidst scandal.

ZEPHYR TEACHOUT: Look, in the—all of us are going to be part of sort of unearthing all of Neil Gorsuch’s opinions, but the important parts to look at are where he expresses his philosophy. And what he has done in antitrust cases and then also in one money-in-politics case is show that he’s going to be at least as bad as Scalia—and we can’t forget how bad Scalia was—and possibly worse, in favoring elites, favoring corporate power and favoring the power of big donors.

So there’s two antitrust cases that are really important to look at. And I know antitrust can seem like this kind of arcane area. But if you look around the world right now and look around America, you see this incredible concentration of power in office supplies, in—with Amazon, with Comcast, with Monsanto, with—in oil and gas. You see this incredible concentration. A lot of that comes from Justice Scalia and other people in the Chicago school, the law and economics school, believing that we should gut antitrust and basically allow monopolists to gather power. And in these two antitrust opinions, Judge Gorsuch shows that he is really with the—with that Chicago school, and, in fact, suggested he might go even farther saying, “Well, one of the reasons people go into business is the capacity to get monopoly rent, so we don’t want to discourage people for going into business,” instead of understanding, as Justice Brandeis and the true lions of our democratic past understood, that antitrust law was really critical for challenging excessive concentrations of power.

JUAN GONZÁLEZ: And, Zephyr Teachout, if you could talk also about Judge Gorsuch’s interest in natural law and what that might mean about his position on marriage equality?

ZEPHYR TEACHOUT: Yeah, this is a really interesting and important area for the senators to ask about this week. In his dissertation, not that long ago, 2004, Judge Gorsuch shows that he is interested in natural law and very skeptical of the idea that the Constitution protects the intimate decisions that people make in the privacy of their own home. There’s a long, long line of cases that respect and understand that there’s constitutional protections for, for instance, the ability of people to use birth control, the rights of people to make their own sexual choices. And in his 2004 dissertation, Gorsuch was really skeptical of those decisions. And what that could mean is that Gorsuch might be a vote against marriage equality, because those decisions underpinned the decision a few years ago recognizing the right of all people to marry who they wanted to.

AMY GOODMAN: I want to turn to Judge Gorsuch addressing the conservative Federalist Society in 2013.

JUDGE NEIL GORSUCH: “What about our criminal justice system?” you might ask. It surely bears its share of ironies, too. Consider this one. Without question, the discipline of writing the law down, of codifying it, advances the law’s interest in fair notice. But today we have about 5,000 federal criminal statutes on the books, most of them added in the last few decades. And the spigot keeps pouring, with literally hundreds of new statutory crimes inked every single year. Neither does that begin to count the thousands of additional regulatory crimes buried in the Federal Register. There are so many crimes cowled in the numbing fine print of those pages that scholars have given up counting and are now debating their number.

AMY GOODMAN: So that’s Judge Gorsuch. If you could respond to that, Zephyr Teachout, and also talk about Citizens United?

ZEPHYR TEACHOUT: Oh, OK. Well, you know, look, we’re going to see a lot of particular quotes pulled out. And I think what we have to do now, this week, is ask him about, first of all, what that means for his judicial philosophy. And then, second, more broadly, we’re not going to get him on a gotcha, I mean, unless—he seems well polished to a fault. I mean, he really is the sort of dream elite candidate in that way. But we are going to be able to, I think, reveal, like, what’s underpinning him, who does he think should govern in society. And this relates to Citizens United.

In a concurrence—and so this is a case where Judge Gorsuch decided to go out of his way and explain, “Here’s what I think”—in Riddle v. Hickenlooper, a case involving limits on campaign contributions, Judge Gorsuch said that campaign contributions are—went out of his way to say that they are one of the most fundamentally protected parts of our freedom, and suggested that we might want to apply strict scrutiny to campaign contributions. Now, let me translate. That means that Judge Gorsuch might be open to not only upholding Citizens United, which has been a wreck for our democracy, but actually striking down laws that limit how much an individual or a corporation can directly donate to candidates, which is actually a really terrifying idea. But what that suggests is that Gorsuch thinks that public decisions, where we all come together and pass laws together, the idea of the public coming together, that’s not the right way to make decisions. It should be more in the billionaires and in the marketplace as opposed to in our democratic sphere.

AMY GOODMAN: We’re going to break and then come back to our discussion about Judge Gorsuch. The confirmation hearing for him to become a Supreme Court justice begins today. Zephyr Teachout with us, constitutional and property law professor at Fordham University, she’s run for public office twice. This is Democracy Now! We’ll be back in a minute.

AMY GOODMAN: “Promised Land” by the rock 'n' roll pioneer Chuck Berry, who died Saturday at his home in Missouri at the age of 90. Berry was the first musician to be inducted into the Rock and Roll Hall of Fame on its opening in 1986. 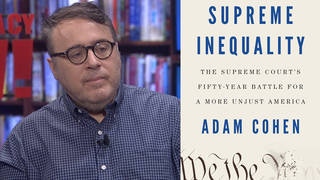