As confirmation hearings begin for Neil Gorsuch, Trump’s nominee for the Supreme Court, we look at his record on voting rights and speak with Ari Berman, senior contributing writer for The Nation. His recent piece is headlined “In E-mails, Neil Gorsuch Praised a Leading Republican Activist Behind Voter Suppression Efforts.”

JUAN GONZÁLEZ: Well, as we talk about Supreme Court nominee Neil Gorsuch, I also want to bring The Nation’s Ari Berman into the conversation. He recently wrote a piece headlined “In E-mails, Neil Gorsuch Praised a Leading Republican Activist Behind Voter Suppression Efforts.”

JUAN GONZÁLEZ: Welcome to the show. And who was this leading Republican activist or operative?

And then von Spakovsky, who is this leading figure behind restricting the right to vote, was nominated to the Federal Election Commission. And Gorsuch wrote, “Good for Hans!” which suggested they had some sort of relationship. At another point, von Spakovsky invited Gorsuch to what was called the Ballot Access and Voting Integrity Conference, where the Justice Department was going after voter fraud. This eventually led to seven Republican U.S. attorneys being dismissed for refusing to file fraud cases with no evidence. And Gorsuch also praised this conference and this effort and said he was going to try to come.

So, this suggests some sort of relationship between Gorsuch and von Spakovsky. It suggests that Gorsuch is at least familiar, if not praiseworthy, with some of the worst elements in the Republican Party when it comes to suppressing the right to vote.

ARI BERMAN: Well, it was very controversial, because it was one of the first voter ID laws, and there was very clear evidence that it discriminated against black voters. In fact, the sponsor of the law told the Justice Department that blacks only voted when they were paid, and if there was less fraud, it was because fewer blacks would be voting, so very, very racially inflammatory language behind this law. It had to be submitted under the Voting Rights Act for federal approval. Four of five lawyers on the review team recommended it be blocked as discriminatory against African Americans, but Hans von Spakovsky, who was counsel to the assistant attorney general for civil rights, manipulated the process for putting this law through, for approving the law. Not only that, von Spakovsky wrote an anonymous law article, when this was being considered, that praised voter ID laws, which was totally unethical. So, this is the kind of person that Gorsuch was praising. While the voter ID law was being manipulated and approved by the Justice Department, Gorsuch was at the Justice Department, and he was praising this kind of action, so it suggests that he has a hostility to voting rights that really needs to be probed by the Senate.

JUAN GONZÁLEZ: And the emails you mentioned were part of a trove of emails released by the Senate Judiciary Committee during—of the time when Gorsuch was in the Bush administration. Is there anything else in those emails that struck you?

AMY GOODMAN: Why were they released?

ARI BERMAN: —of documents. They were released as part of disclosure. But again, this is happening so late. Remember, Merrick Garland waited 321 days and didn’t even get a hearing, which was totally unprecedented. And now we have a situation where Gorsuch is nominated essentially for an illegitimate seat, for a seat Republicans stole from President Obama. And we’re getting all of this information a week before the hearings? What’s the rush? They made Merrick Garland wait 321 days with no hearing. What’s the rush here? We need way more time to examine Neil Gorsuch’s views, because there’s so little about him. He’s such a cipher. So we have to read between the lines on these emails and other things to try to figure out what he really believes.

AMY GOODMAN: And what, anything, were you struck by?

ARI BERMAN: Well, so, other things—it seemed like he had a very strong view of executive power, meaning that, you know, he might be sympathetic to things the Bush administration was doing, and now the Trump administration is doing, on national security. We know from other things that he was hostile to a women’s right to choose. So, I just think, in general, Scalia was so outspoken, but here we have a situation where Gorsuch wants to be another Scalia, but there’s such a small paper trail on him. So, these hearings are so important, because we really need to get down to what he really believes. And we have a situation where John Roberts, for example, when he was nominated, he said, “I just want to be an umpire. I’m just going to call balls and strikes.” We know that John Roberts has been a deeply reactionary figure on the Supreme Court, authoring decisions, for example, that gutted the Voting Rights Act. Will Gorsuch be the same? I’m sure he’s going to be very polished and very professional, but we need to read between the lines on what his ideology really is, to see how radical he actually is.

JUAN GONZÁLEZ: And what do you make of the debates among Democrats as to whether they should do an all-out press to try to delay and obstruct the approval of Gorsuch, and those who say, “Hey, he’s Trump’s pick. There’s a majority of Republicans in the Senate. Let’s just—let’s just not make a big deal about this”?

ARI BERMAN: Well, I think you have to first start with the acknowledgment that, as I said earlier, Merrick Garland waited 321 days and did not even get a hearing and was a very centrist figure that was praised by both parties. So, President Obama bent over backwards to give Republicans someone they could approve, and they still refused to even hold a hearing. So, already Gorsuch is further along in terms of how Democrats have treated him than as Republicans treated Merrick Garland.

I don’t know what Democrats are doing. They’re saying, “Well, if we let Gorsuch go through, then Republicans will allow us to filibuster the next nominee.” That’s crazy. If you believe that the next nomination, that Mitch McConnell is just going to allow Democrats to block it, that’s insane. So, this is such an important fight, because it sets the ground mark for what happens afterwards. And I think if they just let Gorsuch go through with very little scrutiny, that’s just going to make it so much easier for Republicans to nominate someone else.

AMY GOODMAN: And on television, they’re mainly just talking about the politics of the nomination, not actually the record of Neil Gorsuch. And on the issue of von Spakovsky, what about Gorsuch himself when it comes to voting rights, and also then having Neil Gorsuch as a Supreme Court justice and Jeff Sessions as attorney general?

ARI BERMAN: Well, Gorsuch hasn’t ruled on any major voting rights cases in the 10th Circuit, so we can’t really look at his judicial record. We can only look at what he’s been part of, the fact that he views Justice Scalia as a role model, who claimed that the Voting Rights Act had led to a perpetuation of racial entitlement. But Gorsuch will be the deciding case on so many important cases on voting rights and other issues. There are laws that have been struck down, like voter ID laws and redistricting maps in states like Texas and North Carolina, that have been found to be discriminatory against blacks and Latinos and other minorities. Those cases are going before the Supreme Court very soon. Right now there’s been deadlock on these issues, 4-4, when the Supreme Court has considered them in the last year. Gorsuch will now be the tie-breaking vote. So, he could allow strict voter ID laws, discriminatory redistricting maps, those kind of things, to go into effect in North Carolina, in Texas and other states, that will make it harder for millions of people to be able to vote. So, this is the kind of stuff that really should be the focus of the hearings. And I hope that when he says that Justice Scalia is his legal role model, people really dive into what that means. 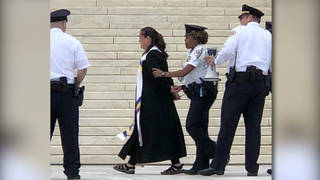