We feature an extended excerpt of Senator Al Franken (D-MN) grilling Supreme Court nominee Judge Neil Gorsuch during his Supreme Court confirmation hearing about the so-called frozen trucker case of Alphonse Maddin. Gorsuch ruled it was right for Maddin to be fired after he disobeyed a supervisor and abandoned the trailer that he was driving, because he was on the verge of freezing to death. “It is absurd to say this company is in its rights to fire him because he made the choice of possibly dying from freezing to death or causing other people to die possibly by driving in an unsafe vehicle,” says Sen. Franken. “It makes me question your judgment.”

StoryMar 22, 2017A Driver Fled His Truck to Avoid Freezing to Death. Only One Judge Ruled Against Him: Neil Gorsuch

AMY GOODMAN: I want to turn to Senator Al Franken, who questioned Judge Gorsuch on the Alphonse Maddin, the so-called frozen trucker, case during the confirmation hearing.

SEN. AL FRANKEN: A couple hours goes by. The heater is not working in his cab. It’s 14 below zero, 14 below zero. He calls in, and he says, “My feet, I can’t feel them. I can’t feel my feet. My torso—I’m beginning not to be able to feel my torso.” And they say, “Hang on. Hang on. Wait for us.” OK, now he actually falls asleep. And at 1:18 a.m., his cousin, I think—cousin calls him and wakes him up. And his cousin says that he is slurring his speech and he doesn’t make much sense. Now, Mayo Clinic in Minnesota says that is hypothermia. And he had fallen asleep. If you fall asleep waiting in 14-below-zero weather, you can freeze to death. You can die.

He calls them back, and his supervisor says, “Wait. You’ve got to wait.” So he has a couple of choices here: wait or take the trailer out with the frozen brakes onto the interstate. Now, when those brakes are locked and you’re pulling that load on a trailer with its brakes locked, you can go maybe, what, 10, 15 miles an hour? Now, what’s that like on an interstate? Say you’re going 75 miles an hour. Someone’s going 75 miles an hour. They come over a hill and slam into that trailer. Also, he’s got hypothermia. He’s a little woozy, probably figures that’s not too safe. I don’t think you’d want to be on the road with him, would you, Judge?

SEN. AL FRANKEN: You would, or not?

SEN. AL FRANKEN: It’s a really easy yes or no.

JUDGE NEIL GORSUCH: Would I want to be on—would I want be on the road with him?

SEN. AL FRANKEN: Well, either, but especially with the hitched trailer with the locked brakes.

JUDGE NEIL GORSUCH: No, I don’t think that was a serious option. I agree with you.

SEN. AL FRANKEN: OK, I thought that was—I wouldn’t want to be there, either.

SEN. AL FRANKEN: And so, what he does is he unhitches it—

SEN. AL FRANKEN: —and goes off in the cab.

JUDGE NEIL GORSUCH: And then I believe he comes back 15 minutes later.

SEN. AL FRANKEN: And he comes back after he gets warm, so that he can be there when it gets repaired.

SEN. AL FRANKEN: OK. Gets fired. He gets fired. And the rest of the judges all go, “That’s ridiculous. He shouldn’t—you can’t fire a guy for doing that.” It was—there were two safety issues here: one, the possibility of freezing to death, or driving with that rig in a very, very—a very dangerous way. Which would you have chosen? Which would you have done, Judge?

JUDGE NEIL GORSUCH: Oh, Senator, I don’t know what I would have done if I were in his shoes, and I don’t blame him at all, for a moment, for doing what he did do.

JUDGE NEIL GORSUCH: I empathize with him entirely.

JUDGE NEIL GORSUCH: Oh, Senator, I thought a lot about this case, because I—

SEN. AL FRANKEN: And what would you have done?

JUDGE NEIL GORSUCH: Senator, I don’t know. I wasn’t in the man’s shoes. But I understand why he did—

SEN. AL FRANKEN: You don’t know what you would have done.

SEN. AL FRANKEN: I think everybody here would have done exactly what he did. And I think that’s an easy answer, frankly. I don’t know why you had difficulty answering that. OK, so you decide to write a thing in dissent. If you read your dissent, you don’t say it was like subzero. You say it was cold out. The facts that you describe in your dissent are very minimal. But here’s the—here is the law that—and you go to the language of the law, and you talk about that: “I go to the law.” “A person may not discharge an employee who refuses to operate a vehicle because the employee has reasonable apprehension of serious injury to the employee or the public because of the vehicle’s hazardous safety or security condition.” That’s the law. And you decided that they had the right to fire him, even though this law says you may not discharge an employee who refuses to operate a vehicle, because he did operate the vehicle. Is that right? That’s your—that’s how you decided, right?

JUDGE NEIL GORSUCH: That’s the gist of it.

SEN. AL FRANKEN: Well, no, is that how you decided? That’s what you decided, right?

JUDGE NEIL GORSUCH: Senator, there are a lot more words in the opinions, both in the majority, by my colleagues, and in dissent. But that—I’m happy to agree with you. That’s the gist of it.

SEN. AL FRANKEN: Right. Well, that’s what you’ve said. And I—look, I’m not a lawyer. But I’ve been on this committee for about eight years. And I’ve paid some attention. So, I know that what you’re talking about here is the plain meaning rule. Here’s what the rule means. When the plain meaning of a statute is clear on its face, when its meaning is obvious, courts have no business looking beyond the meaning to the statute’s purpose. And that’s what you used, right?

JUDGE NEIL GORSUCH: That’s what was argued to us by both sides, Senator.

SEN. AL FRANKEN: Yeah, and you used it to come to your conclusion.

JUDGE NEIL GORSUCH: But both sides did.

SEN. AL FRANKEN: But the plain meaning rule has an exception. When using the plain meaning rule would create an absurd result, courts should depart from the plain meaning. It is absurd to say this company is in its rights to fire him because he made the choice of possibly dying from freezing to death or causing other people to die possibly by driving an unsafe vehicle. That’s absurd. Now, I had a career in identifying absurdity, and I know it when I see it. And it makes me—you know, it makes me question your judgment.

AMY GOODMAN: That’s Senator Al Franken, former comedian, before he was a senator, questioning Judge Neil Gorsuch about the Alphonse Maddin case, the so-called frozen trucker case. Again, Judge Gorsuch was alone, among seven judges, to rule that the company was right to fire Alphonse Maddin. As we wrap up, we’re still with Maddin’s attorney, Robert Fetter. I want to talk about the timing of Judge Gorsuch’s dissent. When the candidate Donald Trump gave his list of Supreme Court justices that he would choose if he were to be president, Gorsuch was not on that list. That was in May. Bob Fetter, the decision was handed out—when was it? The dissent handed out by Judge Gorsuch, August 8th last year, on the frozen trucker case. When the second list came out in September, Gorsuch was added to Trump’s list. Can you talk about the significance of this?

ROBERT FETTER: Yeah. It’s certainly a set of circumstances that, after he was nominated, it certainly rung a bell with me that he was not on the initial list. He writes a—he has this case on his desk where he can show just how uncompassionate he can be and how far he’s able to take extreme textualism in order to rule in favor of a company and corporate interest. Certainly, if I were the Chamber of Commerce or other business interest and I saw that decision, that signals to me that this is my kind of guy. Then he appears on the second list, which, of course, we all know it now, that that decision was outsourced to the Federalist Society and Heritage. And those groups certainly would have saw that decision, a very recent decision, and said, “This is the type of guy that we want on the Supreme Court, because he’s going to be pro-business.” And they’ve indicated they’re very happy with his nomination, because he is pro-business. Pro-business is not a judicial philosophy. It is fine for a legislator to be pro-business, if he can get elected on that basis. But not for a judge. When you’re pro-business as a judge, you’re just biased. And we cannot accept bias on the United States Supreme Court.

AMY GOODMAN: Robert Fetter, I want to thank you for being with us, labor lawyer, partner at Miller Cohen firm in Detroit, represented truck driver Alphonse Maddin in his wrongful termination lawsuit.

This is Democracy Now! When we come back, we go south to Florida, to a state attorney who says she will not impose, call for the death penalty in any case. Stay with us. 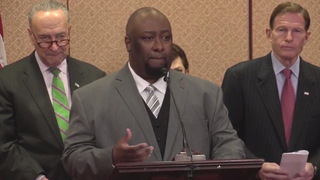 A Driver Fled His Truck to Avoid Freezing to Death. Only One Judge Ruled Against Him: Neil Gorsuch