Under President Obama, House Republicans voted more than 50 times to repeal or rewrite the Affordable Care Act. But on Friday, the House couldn’t muster the votes needed to pass its own healthcare law, which some call Trumpcare. Just minutes before the vote was scheduled, President Trump pushed House Speaker Paul Ryan to pull the legislation. The bill was opposed by every Democrat, as well as many members of the ultraconservative House Freedom Caucus and some moderate Republicans. For more. we speak with Dr. Steffie Woolhandler, co-founder of Physicians for a National Health Program. She is a professor at CUNY-Hunter College and a primary care physician. She is also a lecturer at Harvard Medical School.

JUAN GONZÁLEZ: We turn now to healthcare. Under President Obama, House Republicans voted more than 50 times to repeal or rewrite the Affordable Care Act. But on Friday, the House couldn’t muster the votes needed to pass its own healthcare law, what some call Trumpcare. Just minutes before the vote was scheduled, President Trump pushed House Speaker Paul Ryan to pull the legislation. The bill was opposed by every Democrat, as well as many members of the ultraconservative House Freedom Caucus and some moderate Republicans. The House Freedom Caucus wanted more drastic cuts to Obamacare, while the moderate Republicans were concerned about the potential fallout from the bill, which would have left 24 million more people uninsured while giving a major tax break to the rich.

PRESIDENT DONALD TRUMP: Thank you very much. We were very close. It was a very, very tight margin. We had no Democrat support. We had no votes from the Democrats. They weren’t going to give us a single vote, so it’s a very difficult thing to do. I’ve been saying for the last year and a half that the best thing we can do, politically speaking, is let Obamacare explode. It is exploding right now. It’s—many states have big problems. Almost all states have big problems.

JUAN GONZÁLEZ: While Trump initially blamed Democrats for the legislative failure, he switched his focus to fellow Republicans over the weekend. On Sunday morning, he tweeted, quote, “Democrats are smiling in D.C. that the Freedom Caucus, with the help of Club For Growth and Heritage, have saved Planned Parenthood & Ocare!” Trump tweeted Sunday morning. A day earlier, he urged, on Twitter, his Twitter followers to watch Judge Jeanine on Fox News on Saturday night. Viewers who tuned in would have heard this:

JUDGE JEANINE PIRRO: My opening statement: Paul Ryan needs to step down as speaker of the House. The reason? He failed to deliver the votes on his healthcare bill, the one trumpeted to repeal and replace Obamacare, the one that he had seven years to work on, the one he hid under lock and key in the basement of Congress, the one that had to be pulled to prevent the embarrassment of not having enough votes to pass. But this bill didn’t just fail. It failed when Republicans had the House, the Senate, the White House.

AMY GOODMAN: That’s Judge Jeanine Pirro on Fox News on Saturday. While House Speaker Paul Ryan remains in that position, many observers say he has been politically damaged. Politico is reporting the push to pass the legislation was harmed in part because Trump didn’t appear to know that much—or care that much—about the details of healthcare policy, unlike many congressmembers, who came to him with questions. The Wall Street Journal reports the Trump administration is now ramping up its efforts to weaken the Affordable Care Act by pushing through rule changes and issuing new waivers.

You never supported Obamacare, but you were very critical of what was happening in Congress, Steffie. Can you talk about what did take place, and then what is being talked about now, not in the corporate media—almost no mention of single-payer this weekend—but among progressive politicians and activists?

DR. STEFFIE WOOLHANDLER: Well, our group, Physicians for a National Health Program, thinks we need to be moving forward from the Affordable Care Act to single payer, and not backward through repeal like the Republicans wanted. You know, we thought it was a very big victory this weekend to block the Republican plan. We think it’s from people showing up at those town hall meetings, pushing senators and congressmen in purple states, and making it impossible for the Republicans to do a straight repeal, which is what the Freedom party wanted and which they’d been talking about for the last, you know, seven or eight years.

So this was a victory, but there’s still a lot more—a lot more fighting to go. We’re very heartened to see Senator Sanders and other politicians endorsing the idea of single payer. Certainly within the medical community, there’s a tremendous amount of discussion and media coverage of the single-payer idea. And we think it’s a great time to be putting that idea forward and moving to a Medicare-for-all program.

JUAN GONZÁLEZ: But when you say it was a victory, as Trump has said, he’s vowing to—he said he would let the Obamacare both implode and explode at the same time. But he is basically—what could he do now in—from an executive position, to be able to further damage the ability of people to access healthcare?

DR. STEFFIE WOOLHANDLER: Well, unfortunately, there’s a lot he can do through the regulatory process. You have to have regulatory underpinnings of a health law. And his secretary, Tom Price, secretary of health and human services, is a staunch opponent of the ACA who’s been trying to destroy the Affordable Care Act for years. So, the—

AMY GOODMAN: In fact, when Trump had his press conference, if you can call it that, on Friday, his press moment, standing on one side of him was Vice President Pence. On the other side was Price.

DR. STEFFIE WOOLHANDLER: Right. So I think we’re going to see the Affordable Care Act have death by a thousand cuts. They’re going to do everything they can, from a regulatory standpoint, from a funding standpoint, to undermine Obamacare, weaken it, you know, bleed it to death, if you will. But—

AMY GOODMAN: Talk about how they can do that, because they’re really set on that. They’re saying—they’re saying, actually, that President Obama set 2017 as the year for it to implode. But they say that they’re just going to let it die. What does that mean? And how would they accelerate this? And how could they stop that?

DR. STEFFIE WOOLHANDLER: Well, there’s lots of regulatory decisions you make about what you’re going to insist insurers, insurance companies, do. That’s all in Tom Price’s bailiwick right now. So-called Medicaid waivers, where you’d say to the states, “Hey, we’ll give you the money and let you do pretty much what you want.” Of course, Tom Price is going to be doing that with a lot of these conservative state governments that have no interest in the Medicaid program or in helping poor people. There’s been a lot of lawsuits—

JUAN GONZÁLEZ: So, just to be clear—

JUAN GONZÁLEZ: On the waiver issue, that would, in essence, let them do what they were wanting to do in the current bill, which was create sort of a block grant situation for states on Medicaid?

DR. STEFFIE WOOLHANDLER: Well, it’s not quite the same as what they were going to do in the bill, but it does allow them to do things like charge Medicaid enrollees premiums. I have to remind you, these people are really, really poor, and if you require them to pay premiums, some months they’re just not going to be able to pay, and they’re going to lose their healthcare.

AMY GOODMAN: Just to be clear on that—

AMY GOODMAN: —beyond what Obama had insured, the—

DR. STEFFIE WOOLHANDLER: I’m talking about right now, while Obamacare is fully in place, or, you know, January 1, Obamacare fully in place, there are 26 million uninsured Americans. That’s not universal healthcare. You know, that’s almost 10 percent of the population with no healthcare. And that’s why our physicians’ organization is saying we need to move forward to single payer. We need to insure those people.

AMY GOODMAN: Now, it’s interesting that one of their big problems was the 55-to-65-year-old lot, that were their—under the Republican plan, their prices—the cost of their insurance was going to escalate. Wouldn’t it have been interesting if they had just said, “OK, we’ll lower Medicare to 55”? And that would have taken care of all that. So, I want to turn to Congressmember Peter Welch, the Democrat from Vermont, his remarks earlier this month during the Energy and Commerce Committee’s markup of the American Health Care Act, the Republican plan.

REP. PETER WELCH: You know, there’s been a lot of discussion about the fact that this bill has just appeared yesterday and that it was being hidden. Was it really being hidden from Democrats in America, or was it being hidden from your Freedom Caucus? They say that this bill is a phony repeal of Obamacare. And you want to know something? They’re right, because there is a lot of plagiarism in this bill. The insurance reforms that all of you voted against, you’re now bragging you’re keeping. The subsidies that you say are horrible, you have changed from a direct subsidy, that actually provided meaningful access to healthcare, to on-the-cheap tax credits that don’t do the job. But that’s an entitlement that you say you’re against. The mandate, you’ve decried the mandate. But what you’ve done is imposed a 30 percent penalty, and the revenues don’t go to the healthcare program. The revenues go to the insurance companies. What is going on here?

AMY GOODMAN: So, that is Vermont Congressmember Peter Welch, who, together with Senator Bernie Sanders of Vermont, says they will both introduce legislation for single payer. So if you could respond to what he said and then talk about what their plan is and your thoughts on it. 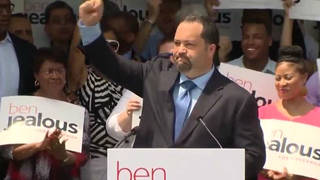