U.N. Considers a Historic Ban on Nuclear Weapons, But U.S. Leads Boycott of the Talks

Some 120 countries gathered at the United Nations this week to draft a treaty to ban nuclear weapons. But the United States is leading a boycott of the talks. Meanwhile, more than 2,000 scientists signed an open letter endorsing the U.N. talks, and, on Tuesday, Pope Francis encouraged the United Nations to pursue the “total elimination” of nuclear weapons. We speak to Zia Mian, physicist, nuclear expert and disarmament activist. He is co-director of the Program on Science and Global Security at the Woodrow Wilson School of Public and International Affairs, Princeton University.

NERMEEN SHAIKH: We turn now to a historic debate at the United Nations. Some 120 countries gather this week to draft a treaty to ban nuclear weapons. But the United States did not take part. In fact, the U.S. led a boycott of the talks. This is U.S. Ambassador to the U.N. Nikki Haley.

NIKKI HALEY: You’re going to see almost 40 countries that are not in the General Assembly today. And that’s 40 countries that are saying, in this day and time, we would love to have a ban on nuclear—on nuclear weapons. But in this day and time, we can’t honestly say that we can protect our people by allowing the bad actors to have them, and those of us that are good, trying to keep peace and safety, not to have them.

AMY GOODMAN: U.S. Ambassador to the U.N. Nikki Haley was joined by envoys from Britain, France, South Korea and other nations in opposing the U.N. talks on a nuclear weapons ban treaty. Russia and China have also declined to participate in the conference.

We’re joined now by Zia Mian, physicist, nuclear expert and disarmament activist, co-director of the Program on Science and Global Security at the Woodrow Wilson School of Public and International Affairs at Princeton University. He’s co-author of Unmaking the Bomb: A Fissile Material Approach to Nuclear Disarmament and Nonproliferation.

What’s happening here? Why is the U.S. leading this boycott?

ZIA MIAN: The news is not that the U.S. is leading a boycott. We knew the United States wasn’t going to participate and that it’s been trying to force its nuclear NATO allies also to not participate. The news here is that, after 70 years, the vast majority of countries in the world have decided they’ve had enough of waiting for the United States and the other countries with nuclear weapons to keep their promise that they would get rid of nuclear weapons, and said, “Enough is enough. We are now going to create an international treaty that will ban nuclear weapons, and you are going to be nuclear outlaws. And you’re going to have to deal with this new reality.”

NERMEEN SHAIKH: So how did these nations come together now?

ZIA MIAN: It’s taken years and years of effort by non-weapons states and peace movements around the world to build the kind of coalition that it’s taken to bring a resolution to the United Nations last year, in which 123 countries, as you mentioned, voted in support of the beginning of talks. The United States tried actively to block that resolution being passed. It actually sent a classified memo to all of the NATO allies the U.S. protects with its nuclear weapons, saying, “Don’t support this resolution at the United Nations. And if the resolution passes, don’t go, or else.” It was actively threatening its own allies to make sure they wouldn’t participate, because they know that in many of the countries in Europe, in particular, and in countries like Japan, which are protected by U.S. nuclear weapons, public opinion and many parliaments are actually in favor of joining the process to ban nuclear weapons. And it’s taken a lot of effort by the United States to keep these countries out of the process.

AMY GOODMAN: Trump said recently, “If countries are going to have nukes, we’re going to be at the top of the pack.” And, of course, you had Nikki Haley saying, “Sure, I’d like a nuclear ban, but what about North Korea?” Your response? What has to happen?

ZIA MIAN: Well, you can’t wait for the worst actors in the world before you pass laws about what’s right and wrong. If that was the way the world worked, we would never have banned slavery, if you had to wait for slave owners to agree in advance that slavery is a bad thing. What countries are doing is laying down a marker, just like we did with chemical weapons, biological weapons, land mines, cluster munitions and creating the laws of war, that simple humanitarian principles apply. There are limits on what states are allowed to do, no matter what. You don’t commit genocide. You don’t use chemical weapons, biological weapons, and you shouldn’t use nuclear weapons. And we’re going to pass a law that says having nuclear weapons and threatening to use nuclear weapons and using nuclear weapons is forbidden under international law. And if you’re going to keep your weapons, then you are going to be on the outside of what the international community considers is acceptable.

NERMEEN SHAIKH: What about other nuclear weapon states—India, Pakistan and so on? Did they issue any statement about why they wouldn’t participate?

ZIA MIAN: They haven’t said why they wouldn’t participate. But what happened when the U.N. was passing the resolution at the end of last year, which the U.S. tried to block, was that China and India and Pakistan abstained. They didn’t vote no, unlike the United States and Russia and Britain and so on. And there was a possibility that at some stage in the future they might actually think about joining the negotiations, even if they’re not ready right now to sign the treaty, because it’s hard to imagine that countries like China, which have 250 nuclear weapons, are going to agree on a process to ban nuclear weapons, where the United States, which has 7,000 nuclear weapons, is going to sit outside this treaty.

AMY GOODMAN: President Trump has proposed slashing the budgets of the NIH, the National Institutes of Health, at the same time proposed boosting federal spending on the production of nuclear weapons by more than a billion dollars. Your final response?

AMY GOODMAN: We’re going to ask you to stay with us. We’ll do Part 2 of our conversation and post it online as a web exclusive at democracynow.org. Zia Mian, physicist, nuclear expert and disarmament activist, co-director of the Program on Science and Global Security at the Woodrow Wilson School of Public and International Affairs at Princeton University. And he’s author of the book Unmaking the Bomb: A Fissile Material Approach to Nuclear Disarmament and Nonproliferation. 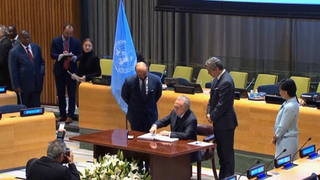