Trump Is Moving “Full Speed Ahead” in War in Yemen, Despite Massive Civilian Casualties

Since taking office, Trump has rapidly expanded U.S. military operations in Yemen. Last month, the U.S. reportedly launched more than 49 strikes across the country—more strikes than the U.S. has ever carried out in a single year in Yemen. The U.S. has also resumed some weapons sales to the Saudis, after the transfers were frozen by President Obama amid concerns about mounting civilian casualties in Yemen. For more, we speak with longtime investigative reporter Allan Nairn.

AMY GOODMAN: With the attacks, from Syria to Mosul in Iraq to Yemen, it wasn’t—what?—eight days before—after Donald Trump was inaugurated that the U.S. Navy SEAL strike happened in Yemen. Something like 25 civilians were killed, many of them children. And perhaps the reason we know about it is because a U.S. Navy SEAL was killed. That U.S. Navy SEAL’s father, William Owens, refused to meet President Trump, who surprised Owens when he came to Dover Air Base with his daughter Ivanka, his son’s body brought to the base. He was harshly critical of the raid. Mr. Owens said, “Why did he have to do this now, to move so quickly in his administration?” Can you talk about that first attack, if it was the first attack, and what it means to talk about these attacks as presidential initiation rites?

ALLAN NAIRN: Well, first, the particulars of that attack, that attack was aimed to be targeting al-Qaeda, a local al-Qaeda affiliate. It’s worth noting that in Syria many of the rebels, who the U.S. has been backing and arming and training, often conduct joint operations with al-Nusra, the al-Qaeda affiliate in Syria. And, indeed, a good number of them have joined up with al-Nusra. But on this raid, it took place in a context of a broader war and a broader assault, which on—on Yemen, on the Houthi armed rebel movement in Yemen, by Saudi Arabia. And in these raids, the Saudis are using U.S. planes. They’re using U.S. bombs. There are actually U.S. personnel sitting in the Saudi Air Force headquarters, helping them with targeting. And the Saudis are systematically targeting Yemeni civilians. After one particularly egregious and especially widely reported massacre on a funeral gathering, the U.S. admonished the Saudis. They criticized them. They temporarily froze and pulled back a bit of their aid. But now, under Trump, again, it’s full speed ahead with assaults on civilian targets by the Saudis in—in Yemen.

And if you look at the press, including outlets like MSNBC, various press outlets that are considered to be liberal, one of the main arguments they make is that a U.S. action is good when it pleases the Saudis. They always—there’s this constant line of criticism, which has been going on for decades, criticism against U.S. presidents who are considered to be too soft at a given moment. And that criticism is: You’re letting down our Middle Eastern allies, i.e. you’re letting down the Saudis. The journalists will say, “I’ve just been in the Middle East, and I’ve been talking to our allies there,” i.e. the Saudis, the Gulf states, “and they’re very unhappy, because they think the U.S. is not showing enough credibility. We’re letting them down”—i.e. the U.S. isn’t being violent enough. And that’s the context in which this attack on Yemen by the Special Forces took place.

As to why Trump authorized it in that way, I think a very important motivating factor, that is really underestimated by people, especially scholars, is the extent to which, when you have power, when you’re the king, a lot of the motivation for violence, for war, it’s not just interest. A lot of the motivation is fun, is thrill, is getting a charge out of ordering violence, and thrilling the public, exciting the courtiers around you, exciting the press around you. The recent reaction to the Syria attack is a very good example of that. I think to really understand how big powers operate, when it comes to going out and killing people, I mean, don’t just study their concrete interests, like, you know, mineral exports and geopolitics. Also study Shakespeare. Study the the whims of kings, because that’s what a lot of it is about. And if you look back at the debates in the campaign between Clinton and Trump, when they were talking about the violent system, they they did not disagree at all about the U.S. right to commit aggression, about the U.S. right to kill civilians. What they did disagree about was how those decisions would be made. Clinton invoked the traditional establishment criteria that I discussed before of, yes, you can bomb, but you can only kill up to 25 civilians with your bombing run. Trump invoked a different standard, saying, “I’ll attack whenever the hell I feel like it.” Both of them allow the killing of civilians, which is a crime.

AMY GOODMAN: And Trump saying, “I was just continuing what President Obama started”?

ALLAN NAIRN: In that sense, Trump does have a point, because it was Obama who started the support of the Saudi attack on—in Yemen and the general policy of U.S. sending—doing its own military-CIA strikes in Yemen. And, of course, U.S. support for the Saudi order and dominance in the region and for their violence goes back for many decades. And it’s also the case that Clinton would probably have done this strike on the Syria airfield, just as Trump did. In fact, a day or so before, she gave an interview to The New York Times where she was recommending strikes on the Syrian airfields.

AMY GOODMAN: No, actually, the interview that Hillary Clinton did was with Nicholas Kristof, and it was in the Women in the World conference. It was several hours before the attack took place.

ALLAN NAIRN: Yeah. In fact, come to think of it, the way Trump operates, maybe Trump saw that—if that was publicly available—

ALLAN NAIRN: —maybe Trump saw that clip. That’s exactly the kind of thing that would set him off, say, “Oh, my god. I’ve got to at least match her, and maybe top her.” But this gets back to the more fundamental point that it’s really important to understand, which is, U.S. has this violent system, which is criminal, and it has had it for decades. It is willing to commit aggression and kill civilians in country after country after country. And all of those responsible for it should be judged by the same standards that we judge domestic killers. And by those standards, they should all be in prison, including the living U.S. presidents, including Hillary Clinton.

But Trump—now, that all said, Trump makes it even worse. Trump is bringing in a doctrine and a group of people who are in the process of and are definitely going to commit even more killings of civilians, even more aggression. And that’s why it was such—one of many reasons why it was such a catastrophe that Trump and the radical-right Republicans won, because it will make it even worse. And the argument which you hear going around, especially in some circles on the left, that, “Oh, they’re all bad. They’re equally bad,” it’s insane, and it’s irresponsible, given that now even more people are going to suffer as a result.

AMY GOODMAN: Award-winning investigative journalist Allan Nairn. We’ll be back with him in a minute, as he talks more about his assessment of the Trump presidency. Stay with us. 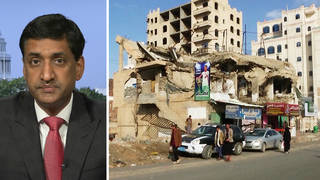