The Trump administration sent mixed signals on North Korea Thursday, as Secretary of State Rex Tillerson said the U.S. is open to direct negotiations with Kim Jong-un’s regime over his country’s nuclear program, while President Trump hinted at a possible nuclear war. Trump made the remark in an interview with the Reuters news service. Trump’s comment came as Secretary of State Tillerson told NPR he’s open to direct talks with North Korea if the country is serious about permanently abandoning its nuclear program. Meanwhile, President Trump told Reuters that South Korea should pay the $1 billion price tag for a THAAD missile defense system the U.S. recently began installing. Trump suggested the U.S. could cancel a free trade deal between the two countries if South Korea doesn’t accept the demand. “I think the president should be talking diplomacy,” says our guest Peter Welch, U.S. congressmember from Vermont and chief deputy whip of the House Democratic Caucus, “not making a reckless threat of military action where it is going to be very damaging.”

AMY GOODMAN: So, in an interview with Reuters, President Donald Trump has warned, “there’s a chance that we could end up having a major, major conflict with North Korea. Absolutely,” unquote. And then you have the secretary of state, Rex Tillerson, saying that he might engage in direct talks with North Korea. Can you talk about what’s happening right now?

REP. PETER WELCH: Well, what we see with President Trump is that he just flies off—whatever is in his head comes out of his mouth or comes out in the form of a tweet. I mean, when he’s talking about—seriously talking about military action in North Korea, it’s pretty reckless. Think about it. North Korea has artillery pieces. They have like 30,000 artillery pieces that are within 30 miles of Seoul. Seoul has millions of people living there, including almost 300,000 Americans. So any military action on our part is going to have massive retaliation.

So, the military option is not realistic without this having us drawn into a conflagration and millions of people or hundreds of thousands of people possibly losing their lives. So that’s a really bad situation, and I think the president should be just talking diplomacy and not making a reckless threat of military action where it’s going to be very damaging. A lot of people would lose their lives. 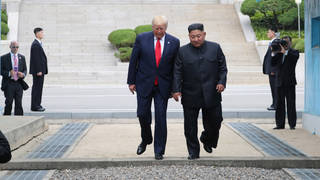